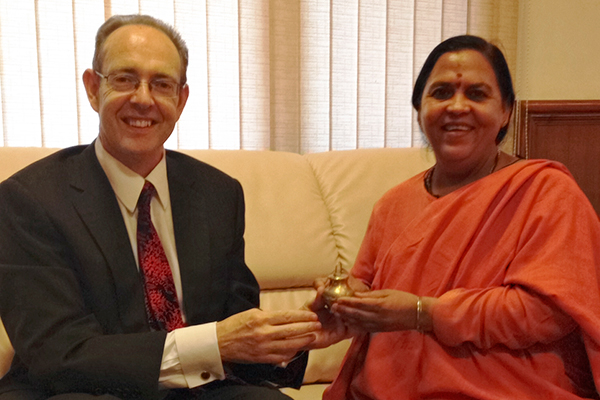 DEFRA urged the chair of the Environment Agency (EA) to deny his preferred candidate for chief executive, ENDS can reveal.

Eyebrows were raised in October when the EA appointed a diplomat to its top job, replacing Paul Leinster. Unlike his predecessor, Sir James Bevan, formerly the UK’s high commissioner to India, had no professional experience in the environment.

Now emails released under a freedom of information (FOI) request show the extent of government influence in the decision and growing tensions between the environment department and its arm's length body.

Leinster announced his retirement last January and the EA ran its first round of recruitment two months later.

The emails reveal disagreement between the EA and DEFRA over the timing of the job advertisement. The EA was keen for it to go live sooner but DEFRA wanted to wait for confirmation of the position's salary range.

There is no formal pay structure for chief executives of non-departmental public bodies, and any proposal for a salary over £142,500 must be approved by the Cabinet Office.

DEFRA had expressed concern that the lack of specific salary would put some some people off. Even at an early stage, a recruitment consultancy had identified “good private sector candidates, but the salary range was insufficient to secure applications”.

In the event, the advertisement was posted without a specific salary range but with the pointer that Leinster's leaving salary was £190,000-195,000.

The first advertisement attracted 38 applications – mostly from the public sector. Of those who filled in diversity information, six were women and one identified themselves as of 'black/Asian minority'.

In May, environment secretary Liz Truss asked for information on the shortlist, the preferred candidate, candidate CVs and the recruitment process (including her own role in it).

On 21 May, Tanya Arkle, deputy director of sponsorship and public body reform at DEFRA, wrote to Truss, explaining who the EA’s preferred candidate was.

She said Dilley had “put forward a credible candidate for this post” but that DEFRA had “concerns”. She recommended that Truss either consent to Sir Philip Dilley’s request to appoint the (redacted candidate) or “given concerns around the timing, lack of clarity on the salary during the recruitment process and about the strength of the field and diversity, ask Sir Philip to re-run the competition”.

This was followed by a fully drafted letter from Truss to Dilley rejecting the appointment.

Although publicly the EA said Dilley had indicated his preference to rerun the competition, ENDS understands that the agency was “surprised” by Truss's letter.

The EA board is responsible for appointing its own chief executive but needs final consent from the environment secretary. In one email Arkle wrote that “Bronwyn’s [Hill, former permanent secretary at DEFRA] role is accounting officer and SofS has a marginal role in terms of right to veto and approval of the salary”.

DEFRA press officers strongly deny that the environment secretary vetoed the appointment, and in the emails Arkle corrects people describing Truss’ decision as a ‘veto’.

But it is clear that in the re-run competition, DEFRA took charge.

The emails show that Truss spoke to Dilley to highlight “her position on reform and having someone with a strong knowledge of Whitehall”.

She added: “We also need a sharper description of the role which really explains it – rather than the blurb which EA put out.”

In the updated job advertisement, Truss asked for a line to be inserted that “conveys the need for fresh thinking to bring in new ideas, and experience of transforming and organisation”.

And she was keen to emphasise that back-office functions would become increasingly centralised across DEFRA bodies “giving you the freedom to become a specialist body” and described a “dotted line reporting mechanism” between the chief executive and the permanent secretary.

During this time there appears to have been little discussion with the EA directly over the revised advertisement and the emails reveal growing tensions between the two organisations. In one exchange, Dilley stresses that “it is officially my appointment unless someone chooses to change that”.

Despite the fact that DEFRA had urged the competition to be re-run to make it more open and transparent, it seemed keen to get someone in as soon as possible. At one point a Whitehall candidate is put forward, with the suggestion that they could be seconded instead of appointed permanently.

DEFRA was anxious that the decision would not be seen as a ministerial appointment. But it also did not want to make public that the first candidate had been rejected and the fact that it was looking in particular for a civil service appointment.

The second advertisement was posted on 30 June with a negotiating salary range of £175,000-195,000, “with a strong steer for the lower end”. There was also a 15% performance-related bonus.

However, there was no search firm. Instead, applications were forwarded directly to the DEFRA mailbox and the department picked up responses and answered questions.

And despite wanting to cast the net wider the second advertisement was only advertised internally to the civil service and staff at non-departmental public bodies such as the EA, and had a very short closing date.

At one point DEFRA staff note that “it’s taking longer than expected to draw the attention of the advert to the talent cohort” but did not consider how to raise awareness of the post until 9 July. One suggestion was to “tweet it”.

In the event, three extra people added to the longlist, and Bevan was offered the role at a starting salary of £180,000 in early September.

ENDS previously noted that Ed Mitchell, former executive director of environment and business, had been tipped for the job. Mitchell resigned on 8 September and finished work on 25 September.

According to the Sunday Times, there were deeper political machinations at play, with Downing Street “concerned about Mitchell’s links to Labour”.

However he is on full pay (around £140,000) for the full six months of his notice period. In a statement, the EA said his pay agreements “are transparent and are made in line with clear public sector guidelines.”

Bevan has spent his first month in the job defending the EA's handling of yet another winter flood crisis, with some suggesting the agency should lose its flood protection role altogether.

But the body is in a difficult position because its order to cease lobbying five years ago has made it nigh impossible to defend itself publicly or to criticise policymaking on areas on which it has expertise.

Sir James Bevan, the UK’s high commissioner to India, has been appointed to the regulator’s top role

Green regulators: joint working to be ‘the norm’

The environment department (DEFRA) has told the Environment Agency and Natural England to cease lobbying and making policy. DEFRA has also abolished many quangos