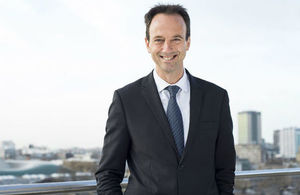 Alex Chisholm, chief executive of the Competition and Markets Authority (CMA), is to take over the role of permanent secretary to DECC.

The appointment, announced on 10 May after an open competition, was made by the prime minister in agreement with cabinet secretary Sir Jeremy Heywood and energy and climate secretary Amber Rudd.

The role, which is the highest civil service appointment in the department, oversees its day-to-day running.

Chisholm’s role at the CMA in its formative period has seen it take on major market investigations into energy, retail banking, motor insurance, payday loans and private healthcare.

Under his leadership, it has handled more than 150 enforcement, merger and advocacy cases, and has adjudicated over regulatory appeals in the electricity, telecoms and water sectors. Altogether, CMA actions have so far saved consumers around £1bn.

Over the previous twelve years, he served in the strategy team at Pearson plc and ran a series of international businesses in the media, technology, ecommerce and retail sectors.

His early career was in the Civil Service, joining as a ‘fast-streamer’, then working in various economic policy roles in the Department of Trade and Industry and the Office of Fair Trading. Chisholm read History at Merton College Oxford and was awarded an MBA at French business school INSEAD.

The appointment will hand Chisholm the crucial task of turning around a department in crisis over deep departmental and programme budget cuts following the government’s energy policy reset, cuts to renewable energy funding, carbon capture and storage through 2015 and speculation over DECC’s own future (endsreport.com/50697; 49942).

Meanwhile, the policy changes have seen the UK slip to 13th place internationally on renewable generation after a period of rapid progress (endsreport.com/52520).

Perhaps not surprisingly, the department, which was ushered in with laudable policy ambitions and highly committed staff in 2008, has been hit by loss of key staff and falling morale. In November, a staff survey revealed that more than a quarter of civil servants at DECC wanted to leave within a year and another 10% as soon as possible (endsreport.com/50616).

Chisholm will need to dig deeply into his extensive leadership, regulatory and business experience if a revitalised DECC is to oversee the UK delivering effectively on its carbon budgets out to 2050, implementation of the Paris Agreement and of electricity market reforms (endsreport.com/51382;  51241).

Civil servants at the environment and energy and climate change departments have little regard for their leadership and strategic direction, says a cross-government survey