Things are looking up for environmental consultants in terms of pay and job openings. This is the picture that emerged from the 2013 practitioners survey by the Institute of Environmental Management and Assessment (IEMA).

IEMA’s findings were based on responses to an online survey of its 15,000 members run between December 2012 and January 2013. The independent environmental professional body has been surveying its members annually since 2010, building on surveys in 2005 and 2007.

The latest results reveal that 57% of the 2,281 environmental professionals who took part received a pay rise last year. A fifth of the companies employing these members also took on more environmental staff.

Job rates among environmental professionals appear to be holding up in austere times. The survey reports 96% of respondents were in work in 2012, a slight rise on 2011.

IEMA’s executive policy director Martin Baxter was encouraged by the institutes latest annual barometer. He was also positive about the recruitment upturn: “These figures are clear evidence that UK Plc is now putting environment central to their businesses, and using this as a strategy to grow their way out of the recession.” 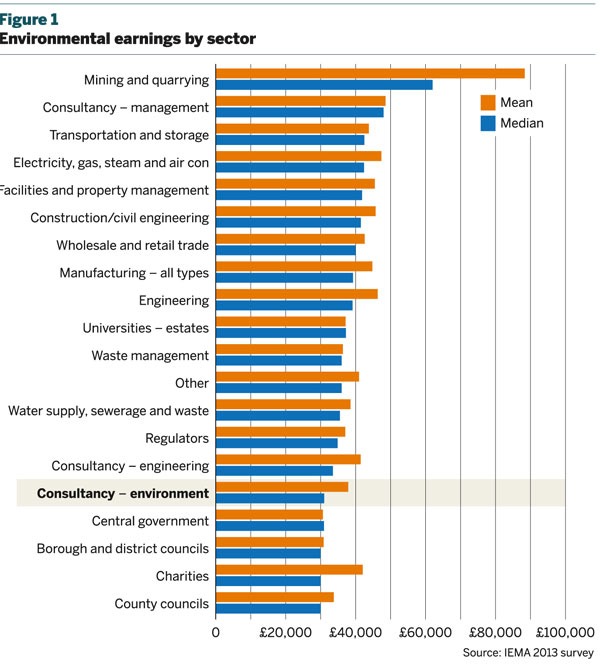 The latest survey also shows that a fully qualified, experienced IEMA member can now expect an annual salary in excess of £46,000. Roles in the mining and quarrying sector are most lucrative, commanding a median wage of £62,000 (see figure 1).

At the top end of the wage scale, a fortunate few environmental professionals are being rewarded with salaries above £100,000. 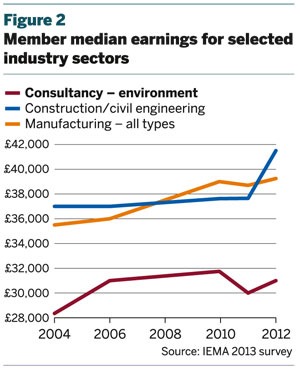 Although there have been minor ups and downs, the median wage for an environmental consultant has held remarkably steady since the start of the economic downturn (see figure 2).

The level in 2012 was the same as it was six years before. Inflation will have eaten into this and eroded real incomes, of course, but this is an austerity experience common to other sectors.

At first glance, environmental consultants’ earnings can appear lower than those of environmental professionals in many other businesses. However, variation in the seniority of IEMA members across different sectors means such comparisons are not equivalent. The observed wage difference for environmental consultants, is partly due to the fact that they are ‘bottom heavy’ with more entry level roles than, for example, the manufacturing sector. 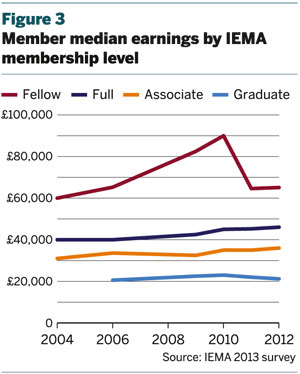 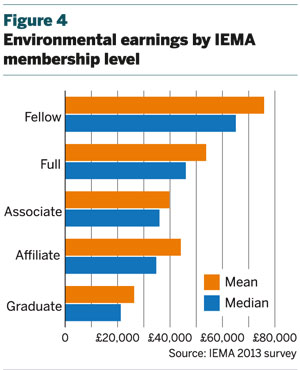 However, remuneration increases with career progress, rising to £46,025 for full IEMA members, rewarding both qualifications and experience. Leaders within the profession who eventually become IEMA fellows can expect to attain a median income of £65,100 currently.

Some general salary and employment trends can also be gleaned from IEMA’s latest survey.

For example, the average wage increase for the 57% of members who did receive a pay rise last year was an appreciable 4% hike. This far outstrips the typical 1.4% increase in gross annual earnings for UK employees in 2012.

Less fortunate, however, were the 36% of IEMA members whose pay remained frozen last year.

A fifth of IEMA members surveyed said the company they worked for recruited more environment professionals in 2012. These firms were commonly recruiting staff to work in sustainability, health and safety and environmental management, protection and regulation.

Significantly, graduate opportunities made up 14% of new recruitment last year.

Environmental impact assessment (21%) and ecology and biodiversity (20%) were the most popular roles for firms recruiting graduate staff, followed by land use and planning (16%), air quality (11%) and climate change (11%).

The pen portraits included in this story of three environmentalists – working in climate, ecology and environmental impact assessment – exemplify the wide range of opportunities for graduates in the environmental sector and the kind of careers they can look forward to.