Over the past year many column inches have been taken up with stories relating to shale energy, varying from concerns over water supplies to ministers claiming it could lower energy prices.

However, while investigations are under way and some exploratory drilling has taken place, commercial exploitation is some way off.

Cuadrilla Resources, the Centrica-backed developer, has rights to explore some 1,200 square kilometres of the Bowland Shale and has so far drilled four exploratory wells for shale gas, all in Lancashire

It has also started investigative drilling for shale oil in Balcombe, West Sussex. Of those wells, it has only hydraulically fractured (fracked) one: Preese Hall near Blackpool.

Fracking involves injecting a mix of water and chemicals into a well at pressure to break up rocks and release gas. It was stopped at Preese Hall in 2011 after it caused two minor earth tremors. The government gave the industry permission to restart fracking in December 2012 albeit under certain conditions.

Cuadrilla has announced plans to drill and frack exploratory wells at six more sites in Lancashire and drill vertical wells to test the geology at three others. But many of those will need to go through a potentially lengthy planning process first and the firm says it will not undertake any fracking until 2014 at the earliest.

There are several other firms involved in exploration:  iGas, Australian-owned Dart Energy, Coastal Oil and Gas Ltd, Celtique Energie and Eden Energy. But few of these companies’ plans have entered the public domain. The firms hold licences, issued by DECC, to explore for onshore oil and gas in certain areas, but only hold a handful of planning permissions to drill wells and  none to frack (see map, p6). 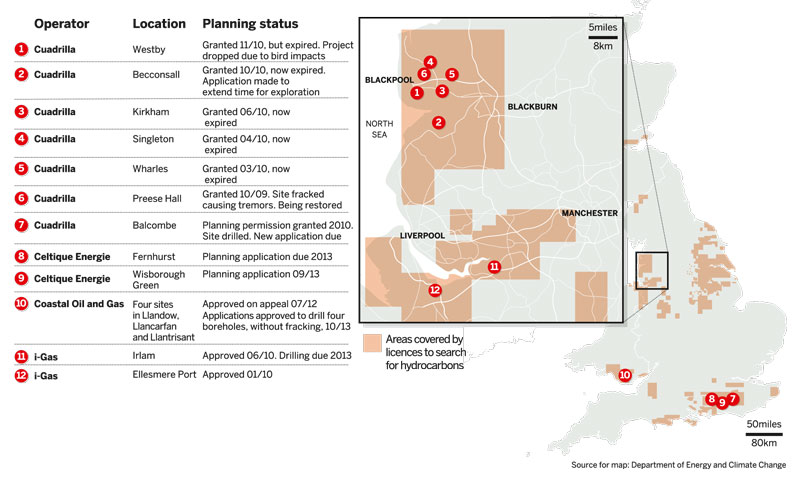 The future potential of shale is significant. In June, the British Geological Survey (BGS) said the Bowland-Hodder Shale, centred on Lancashire and the UK’s most promising area for shale gas, could contain 1,329 trillion cubic feet of gas. That compares with the UK’s annual consumption of 3.5tcf.

The BGS did not provide an estimate of how much of that was technically and economically recoverable, but even if it were a pessimistic 5%, that would be equivalent to almost 19 years of UK consumption at current demand levels.

The BGS is now working on a resource estimate for the Weald Basin in the southeast, which is thought to be the UK’s second most promising area.

It will take some time to assess how much gas can be recovered commercially and under what circumstances. In 2011, Cuadrilla said that 4-12 exploratory wells would need to be drilled to conclude the extent of commercially exploitable reserves in an area and these would be drilled at a rate of about three a year.

That could mean clearer figures for the available resources will not be known until 2015.

So what does this mean in the longer term, in relation to the resource that may be exploited and the number of wells that could be drilled across the country?

For an idea of the landscape some 20 years ahead, in 2035 you could look at the scenarios that appear in an Institute of Directors  (IoD) report published this year and sponsored by Cuadrilla.

That outlines a scenario in which there is “widespread development” of shale gas. It assumes 100 ‘pads’ would be developed across the country, each featuring ten vertical production wells. Each of those would have four horizontal wells drilled off them into shale gas seams, which would then be fracked repeatedly for gas.

This assumes a far more compact level of development than has been seen in the US. The IoD says drilling would start in 2016 with two pads being developed and peak between 2024 and 2027 when ten pads and 400 laterals would be drilled each year. Drilling would stop in 2032.

One hundred well pads may not seem a lot but under the IoD’s central scenario, this level of development would give about 13,000 billion cubic feet of gas – equivalent to four years UK supply.

(In the IoD’s scenario, annual production would peak in 2029 and decline rapidly thereafter. Shale gas wells see steep drops in production because a burst of gas is released when the well is fracked.)

The IoD’s figures could be underestimates of development potential. Cuadrilla has said it could drill 40 well pads featuring 400 wells over a nine-year period in its blocks of Lancashire.

But the majority of non-industry sources say it is too early to make predictions and people are overly optimistic about the potential recoverable resource.

For example, in January, Deutsche Bank issued a briefing to investors: “Estimates of the possible rate at which shale gas could be extracted in the UK and the time frame for such recovery... should be taken with a great deal of caution.” This is due to technological, environmental and political uncertainties, but “especially as no development plans have been set forth”.

The International Energy Agency is, so far, the most respected source to have put forward an estimate of potential future extraction in Europe. In May 2012, it issued a report calling for shale gas extraction to be undertaken to the “highest practicable environmental and social standards”. This contained seven ‘golden rules’ to ensure production is socially acceptable, including measuring baselines for all potential environmental impacts and setting rules to limit them.

A section on Europe says that if those rules are followed, the continent could be producing 388bcf of gas from unconventional sources in 2020 and 2,719bcf in 2035. The majority of this would be shale gas, but some would also be from coal-bed methane projects.

Those figures compare with European gas demand of 17,657bcf. It is clear shale will not stop the trend towards ever-growing gas imports across the continent.

The IEA report says it expects France to produce 282bcf in 2035 despite currently having a moratorium on development. It also says that Poland, Norway, Ukraine, Sweden and Denmark all have large reserves, with the UK coming in seventh in terms of potential.

That information can be used to give a rough estimate of how much shale gas the UK could be producing in future, of 64.6bcf in 2020 and 406bcf in 2035. That assumes each of the six countries outside France produce the same amount of gas, although in reality Poland is likely to dominate.

If those levels arose, they would still be significant for the UK, equivalent to 2-12% of current annual consumption.

There are significant question marks over what even a high level of production would achieve.

In February, Bloomberg New Energy Finance issued a note to investors saying UK shale gas production would need to hit up to 1,642bcf a year to offset expected declines in UK offshore gas production and eliminate the need for imports.

It is only under those circumstances that domestic production could start affecting UK gas prices.

That would require some 10,000 wells to be drilled over a 15-year period and for those to drain some 870,000 hectares of gas, an area bigger than Lancashire.

Bloomberg concluded that the chance of this occurring is slim but that shale gas extraction will occur despite higher costs in the UK than in the US.

“It is not unimaginable that hundreds of drilling sites holding thousands of wells could be set up in the UK, but it would require favourable geology, public acceptance and the establishment of a services industry and onshore infrastructure,” it says. “None of these can be quickly established.”

If commercial shale gas growth is therefore likely to occur later this decade, environmental professionals should start making themselves aware of its potential impacts and opportunities.

This report sets out to help with that by providing a comprehensive and objective look at potential environmental impacts of shale gas, from its seismic effects to its water use and the waste it produces, from local impacts such as noise and landscape to its climate effects.

It also explains the regulatory regime around each and takes a look at how the great unknown that is the planning system could impact on projects.

All these issues could impact on how much shale gas is developed in the UK and affect all the scenarios mentioned above. The future may be clouded by uncertainty, but one thing is clear: the topic is unlikely to leave the headlines any time soon.

UK shale gas and the environment