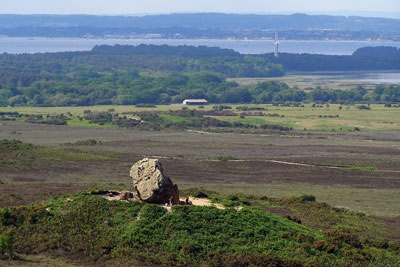 Shale gas production in the UK is likely to take place closer to residential areas than in the US and could encroach on important natural sites. As such, the potential visual impacts, increased traffic and noise levels of development are likely to be an immediate concern to councils and local residents.

In particular, a detailed noise-monitoring scheme should be submitted to the relevant mineral planning authority. This should show when and where noise monitoring will be carried out, with reports being submitted to the authority. Drilling must stop if maximum permitted noise levels are breached.

Details of proposed lighting, including siting, height, design and position of floodlights and a full site-landscaping plan should be submitted to the local planning authority.

The size and extent of external visual impact and land use will depend on the phase of development, with most disruption occurring during drilling and fracturing, not extraction.

During exploration, there is typically one well per drilling ‘pad’, which Cuadrilla says is less than one hectare (10,000 square metres) in size.

A single production pad, meanwhile, can accommodate multiple wells drilled vertically, with lateral arms deep down. How many depends on the results of the exploration, which would show the availability of the gas resource and its geography.

In the US, earlier shale gas pads tended to be single-well but multi-well pads are now the norm, with up to four lateral offshoots drilled from a single vertical borehole. This limits the external impact of the development and the amount of infrastructure required.

The shale resource discovered in Lancashire is thicker than that typically found in the US or in other areas, at up to a mile in places. This means multiple small-bore horizontal wells could be drilled from each vertical well, which would minimise the surface size.

Cuadrilla expects each production pad to cover about two hectares. Depending on how the network is configured, a ten-well pad could cover the same amount of surface land whether it has ten or 40 laterals.

A report commissioned by Cuadrilla and undertaken by Regeneris Consulting predicts between 20 and 80 pads could be installed (40 in its central scenario) in Lancashire.2 Even 100 production pads (each with ten vertical penetrations) would take up just 200 hectares (2km2) of the county’s 1,200km2 surface area exploration licence.

As well as pads, additional land is needed for gathering stations, compressors, water treatment plants and other infrastructure such as access roads.

In the UK, shale gas developments would probably be closer to transmission infrastructure and the water and sewerage network than those in the US. Furthermore, developments are more likely to be able to use water from a mains supply rather than tankering it in.

This is likely to mean less extensive pipework to transport gas, water and wastewater, and fewer lorry journeys. Using multi-well pads can help to further reduce the number of roads, pipelines and drill sites.

The onshore oil operation at Wytch Farm in Dorset has been held up as an example of good practice in terms of visual impacts (see picture above).

It is located in an area of outstanding natural beauty and on a national nature reserve, on a World Heritage coastline, among Ramsar sites and is situated on National Trust land.

The site has been running since the 1970s, during which time a form of hydraulic fracturing has been used to extract oil from wells than would otherwise be unavailable.

But there have been few public objections to it; indeed not many people even know it exists. This is largely due to the effectiveness of abatement measures that were used to minimise the impact of the ‘discreet’ development. These include effective landscaping such as tree screens that hide machinery and acoustic enclosures to baffle drilling noise.

Wytch Farm operator Perenco was recently given permission by the council to continue pumping oil until 2037.

Another local consideration with shale gas production is its impact on traffic. Heavy vehicles are required to carry construction equipment and move plant, but also to transport water to and wastewater from the site.

The volume of traffic will depend on how many pads are installed and the number of wells drilled from each one. In addition to the wider climate implications of fuel use, increased traffic movements are a local nuisance, produce noise pollution, reduce local air quality and increase wear on local roads.

A report by researchers at the Tyndall Centre for Climate Change Research, commissioned by the Co-operative Group, scales up the experience of shale gas production in New York State to suggest 7,000-11,000 lorry journeys would be needed to construct a ten-well pad in the UK.3

The amount of water that needs to be transported will depend on whether it can be extracted from a mains connection rather than abstracted directly and how far wastewater would need to be taken to be processed.

Waste management firm Remsol, which is advising Cuadrilla on wastewater, anticipates about four million litres of wastewater will need to be removed and disposed of during exploration for a single well. Using tankers with a capacity of 35,000 litres equates to 114 outgoing tanker journeys per well over a three-month exploration period.

This is in addition to transporting water to the site, because it is not on the mains supply and Cuadrilla has not applied for a water abstraction permit.

Lee Petts, managing director of Remsol, points out that other established industries such as agriculture are already responsible for a large amount of heavy traffic on Lancashire’s rural roads. He estimates that the county’s dairy industry uses between 3,800 and 7,500 one-way journeys to transport milk over the same three-month period.

“I feel it’s highly likely that a mechanism for recycling wastewater at the drill sites will be deployed in the production scenario to reduce the quantity of water consumed and wastewater requiring off-site processing, so I doubt we’d ever see this level of road transport impact.”

Petts says it is not yet clear what the transport impacts of production will be.

But an Institute of Directors report, based on data from the European Commission, anticipates much higher water use and subsequent traffic movements during the production phase.4

It uses figures from an EU report5, based on experience in the US, which estimates that a ten-well pad with ten laterals could use 136 million litres of water and have between 2,856 and 7,890 truck movements over 20 years, depending on where the water comes from.

Councils are responsible for local air quality and would be required to develop a strategy to improve it. This would include monitoring pollution from traffic flow as a result of fracking operations and considering traffic movements in deciding whether to grant planning permission.

Traffic impact could be reduced by substituting truck transport for pipelines, converting vehicle fleets to natural gas and transporting any chemicals used in a dry form rather than liquid.

Cuadrilla expects to use existing road networks for all its sites and so far has been able to do so. It has also commissioned engineering consultancy Arup to undertake an environmental impact assessment (EIA) on the Lancashire development, which will include an assessment of transport impacts.

Arup’s scoping report says it will also consider the impact of drilling and traffic on this site but, given the large distance from dwellings and the drilling depth, no vibration assessment.6

It notes that the development site is in a rural location, with no major infrastructure or developments nearby. Noise is expected to be dominated by distant road traffic and industrial use and possibly some aircraft. There will also be some noise from traffic on minor local roads.

Noise pollution is likely to be a more important consideration given the UK’s relatively dense population. It can affect local amenity and tourism and disrupt wildlife.

The production phase is the noisiest part of the process. Drilling is expected to last about four weeks for a ten-well pad, followed by two to five days of hydraulic fracturing per well and generally continues overnight.

A study by the New York State Department of Environmental Conservation measured noise levels between 44 and 79 decibels for drilling, depending on the depth of activity, and 67-104 decibels for fracking.

Balcombe, West Sussex, where Cuadrilla is undertaking exploratory work, has been the focus of prominent public protests against shale gas development.

West Sussex County Council says it received a few complaints before drilling began alleging breaches of conditions about hours of operation and HGV movements. These were investigated and found to be unsubstantiated.

Once drilling started, there were about a dozen complaints about noise during the night. The council was investigating this as this report went to press and Cuadrilla was undertaking a noise survey, in compliance with its planning conditions. In the interim, the company put in place physical mitigation measures, including screening and matting, and made operational changes.

Cuadrilla stopped drilling on 7 September after approaching its permitted noise limit, but has since restarted. The maximum noise level at nearby properties differs depending on the time of day: 55db between 7.30am and 6.30pm from Monday to Friday and 42db at all other times.

Lancashire County Council received five complaints during exploration, all relating to Cuadrilla’s site at Anna’s road in Westby. Two mentioned plant noise and four mentioned parking – with one complaint mentioning both. However, none of these complaints were upheld.

Experience suggests that the local impacts of fracking are manageable under the planning regime as long as assessments are thorough and appropriate mitigation measures are put in place. If performed transparently and openly, this should assuage the fears of residents about the effect on their lives and the local environment.

UK shale gas and the environment