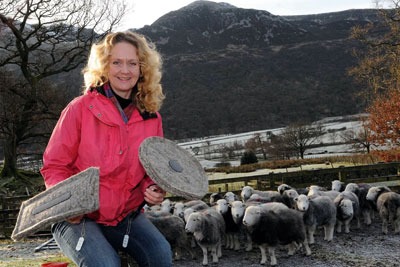 About two thirds of UK homes have a chimney, a large proportion of which are left open. On average, one of these homes will lose 520 kilowatt-hours of energy through heat loss up the chimney. This equates to 185 kilograms of carbon dioxide, depending on the type of heating fuel used.

Chimney Sheep was the idea of Sally Phillips, who lives in Cumbria. One of her duties as a volunteer bat warden was to free bats stuck in people’s homes, the animals often having come down the chimney. This led her realise how many people leave their chimneys open, wasting energy, even though the fire is scarcely used.

After two years of development, Phillips came up with a solution. Chimney Sheep is made of a disc of thick felted wool which is inserted up the chimney to where the flue narrows just above the fireplace. The disc seals the chimney preventing heat loss. It also prevents draughts under doors and windows caused by air being drawn up the chimney.

The Chimney Sheep is made from 100% Herdwick wool, a mountain sheep indigenous to the Lake District. The wool disc is made in Lancashire, while the recycled plastic handle and clamp used to insert the disc are made in Northumberland. The Chimney Sheep was designed to be made from cheap but sustainable materials. The price of the product starts at £12.50. It was also designed to be easy to use. Other products on the market are more expensive and harder to install.

Phillips started her company Chimney Sheep in September 2012 when she launched the product. In six months, she sold 2,000 units, turning over £36,000. At first the product was only available online, but later it was sold through seven retailers. The Chimney Sheep was featured in an article in the Mail on Sunday and on the national radio.

Phillips said: “I have had very positive testimonials, with people reporting an immediate and noticeable reduction in draughts, increase in warmth, and even needing to turn down the thermostat after installing a Chimney Sheep.”