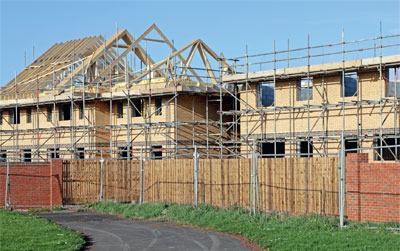 For years, demand from clients for environmental, carbon and sustainability consultancy services had been on a seemingly inexorable rise. But recession brought growth to a halt and sent the UK market into a tailspin. Indeed, the 2009 downturn was the first market contraction seen in the modern era of environmental consulting.

Recovery last year was gradual, patchy and far from widespread. While demand picked up in some sectors, in others it remained in a rut.

And the first half of 2011 has remained difficult for many. Consultancies exposed to the land, property and development sectors remain squeezed, with client demand in these areas yet to recover strongly.

Waterman Group is among them. In its May interim management statement, the engineering and environmental consultancy said it had “witnessed slower trading than originally anticipated”. Describing the property market as “still challenging”, it said fee levels remained under pressure. 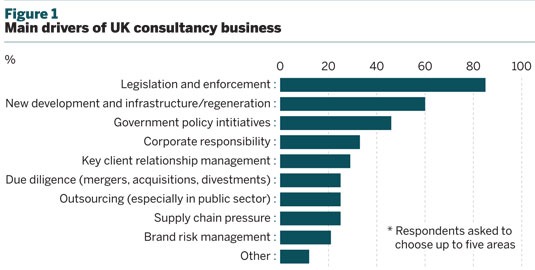 Despite the market ructions, continuity in the main factors influencing demand for consultancy services emerges from this year’s survey. Those for UK environmental, carbon and sustainability consultancies remain the actions of government and regulators.

And despite the government’s preference for a slimmer state and a pruning of the regulatory landscape, legislation and enforcement remains the most important business driver of all. When asked to indicate up to five key current drivers for their UK environmental, carbon or sustainability consultancy services, 85% of respondents identified it. Half noted government policy initiatives.

“Policy initiatives are important too,” he says. “Clients expect us to be able to guide them on the implications of policy developments in their business and we need to be able to ‘see round the corner’ for them.”

Noted by three in five consultancies, it is the second most widely cited factor this year. David Nancarrow, director at multidisciplinary consultancy Atkins, says infrastructure is of “key importance” to its environmental consulting business.

Demand is being underpinned by the growing emphasis on sustainable infrastructure development in areas such as energy, buildings, water, waste, transport and flood defence.

Corporate responsibility was noted by a third of consultancies as a key business driver, while three in ten noted client relationship management.

It is largely clients’ growing realisation of the importance of their wider ‘green’ image that is driving demand for consultancy services in these fields.

Meanwhile, supply chain pressure and undertaking due diligence for mergers, acquisitions and divestments were noted by a quarter of consultancies as key business drivers. One fifth mentioned brand risk management.

And despite the spending cuts, outsourcing, particularly by the public sector, is considered a key business driver by a quarter of consultancies.

Among them is energy and carbon solutions provider, Camco. Its UK director, Dave Worthington, says organisations’ demand for energy and carbon management services is growing, despite their dwindling resources.

“The public sector is becoming increasingly resource constrained but the long-term environmental targets and cost-saving opportunities remain,” he says.

“Clients are looking to package off the more complex risk elements to solutions providers and increasingly, we are fulfilling the role of energy managers for councils.”

He added: “Despite the current budget constraints, organisations see the short-term cost of buying in services are more than offset by the savings in energy bills.”

But outsourcing is not considered an important business driver by most consultancies and wider public-sector austerity largely explains why.

In its May statement, Waterman Group blamed government spending cuts for the downturn in its outsourcing business. Significantly, it noted that market contraction had become “more acute following the finalisation of local authorities’ budgets in April”. 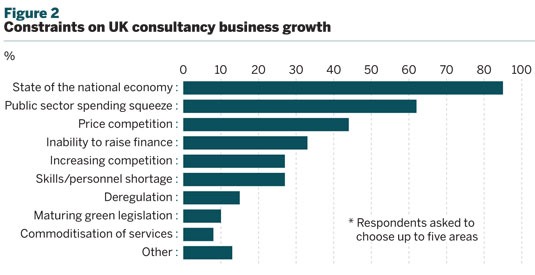 A number of constraints on business growth are affecting consultancies. Chief among them are the state of the national economy and the public spending squeeze. These factors were noted by 85% and 62% of organisations respectively, this year.

Three quarters and half of consultancies cited them in 2010. ENDS noted that “with the recovery fragile, the risks of the fiscal squeeze tipping the economy into a further period of sluggish growth [were] real” (ENDS Green Consultancy Review 2010, pp 5-8).

Now, with the spending cuts biting and the private sector struggling to take up the slack, the UK economy remains in a precarious position. Many consultancies are finding business growth hard to come by. They are concerned that prospects will be further hit by continued economic weakness and the effects of the fiscal squeeze.

And they are right to be worried. Hit by a slump in construction activity, the UK economy flat-lined over the winter and signs of a pick up have been few and far between (ENDS Directory 2011, pp 7-9).

Moreover, the UK is susceptible to the economic ructions under way in the Euro-zone, despite not being part of the single currency.

In short, uncertainty, economic fragility and risks to growth are the watchwords. At best, a further period of sluggish growth is in prospect for the UK and a relapse into flat or negative growth cannot yet be ruled out.

Paul Winter, president of the Management Consultancies Association sums it up: “The economy is still struggling and the outlook remains fragile.” ?