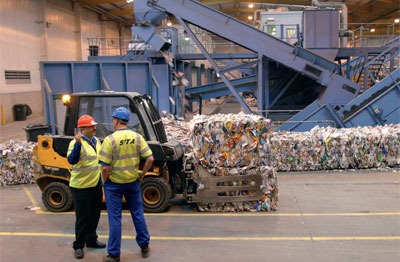 Environmental consultancy covers an enormous spread of work areas. In our survey we set out to identify the hot spots and the ‘stick in the muds’.

Respondents were asked to identify top growth areas for their organisation over the coming year, plus those areas relevant to their organisation that they expect to be most constrained. The net balance between growth and contraction expectations paints a vivid picture (see figure 3). 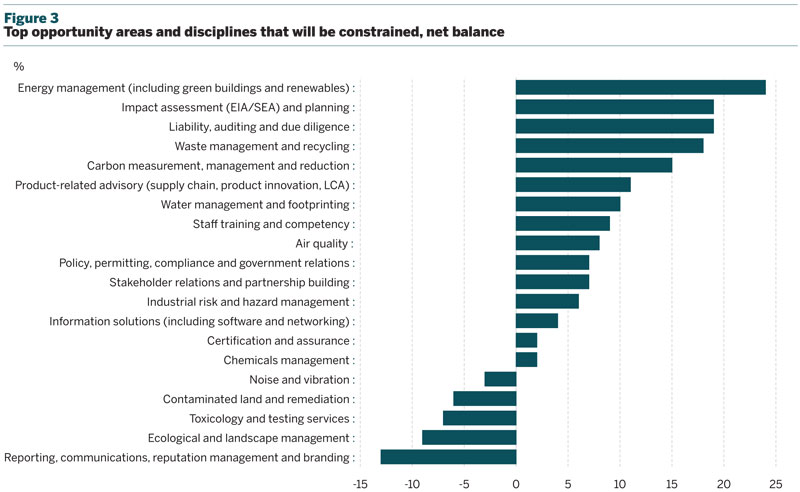 More than two in five respondents identified energy management (including green buildings and renewables) as a growth area. One third cited carbon measurement, management and reduction as having positive prospects.

Demand for such services is being underpinned by the rise in energy and carbon prices. “Increasing energy prices have continued to spur businesses into action,” says SKM Enviros’ Mr Clark.

“And whatever develops in the carbon policy agenda, clients know that carbon and energy prices are only heading in one direction, so it makes commercial sense to develop strategies and actions to save both.”

And growth in the incorporation of renewables into new building design, carbon footprinting and data management are of relevance too, further underpinning consultancy demand in the sector.

Consultancies best-placed to meet clients’ evolving needs will reap much of the market growth in these areas. RPS will be among them. In its May statement, the consultancy noted “increasing levels of activity from many of [its] clients”, adding that its energy business was expected to display “good growth” during the year.

Waste management and recycling is another important area offering consultancies scope for growth this year. Three in ten organisations cited the sector as having buoyant prospects. Rising demand is largely being driven by tighter regulation. Andy Young, UK commercial director of RPS Planning & Development, says the key driver is the landfill tax.

“This legislation alone means that doing nothing is not an option for local authorities who are responsible for collection of household waste,” he says.

There is also the European Landfill Directive, which requires 65% of the household waste volumes of 1995 to be diverted from landfill.

In particular, areas such as feed-in tariffs for generated electricity and renewable heat incentives for exporting waste heat from processes such as gasification or mass burning.

Indeed, the growing links between the waste, energy efficiency and carbon agendas is providing quite a fillip to demand prospects for consultancies’ services.

“Whereas our experts in those fields used to operate separately, they are now more than ever working side by side on projects,” says Mr Clark.

“We face huge challenges on waste management and equally large opportunities for resource efficiency, recycling and resource recovery, so we are very positive about the prospects for consultancy demand in this area,” he says.

And despite the planning system being in a state of flux, demand prospects in impact assessment (EIA/SEA) and planning-related consultancy fields are seen as offering scope for business growth, by two in five consultancies.

RPS said activity levels in UK planning and development consulting had shown “some improvement during the first quarter”.

In its statement, the consultancy also noted the market as being “more stable”, but added: “Until economic recovery becomes stronger and the effects of government spending cuts on our clients become clearer, uncertainty will remain.”

Meanwhile, work related to policy, permitting, compliance and government relations is an area seen as offering growth prospects by a quarter of consultancies.

The same proportion noted staff training and competency as a buoyant sector for their business.

One in five noted liability, auditing and due diligence; the same proportion that cited certification and assurance as offering growth possibilities.

But some areas that have formerly offered consultancies good growth prospects remain well down the ‘league table’ of sectors with buoyant prospects.

Contaminated land and remediation is chief among them. Driven by demand from developers, the sector has long been a major contributor to environmental consultancies’ turnover and activity.

But its position as a major growth sector has slipped in recent years. As the sector dipped in 2009/10, just a tenth of consultancies saw it as offering buoyant near-term growth prospects.

Now, still only one in seven consultancies see it as such.

Atkins is among the optimists. Director David Nancarrow says it is the larger organisations that have been better placed to weather the market storms in the sector.

“Our contaminated land and remediation business has been helped by relationships with large developers and by infrastructure projects,” he says.

“Clearly, those organisations that have larger and longer-term projects will benefit, when conditions are generally more challenging.”

But more than a fifth of organisations remain bearish on the 2011/12 growth prospects in contaminated land and remediation consulting.

The sentiment evident last year has persisted, driven by the ongoing weakness in brownfield development, the wider property market downturn and the slump in house building.

“These areas are proving slow to rebuild momentum after the recession and any opportunities that do arise are tempered by fierce competition for market share,” says SKM Enviros’ Mr Clark.

Policy developments and funding cuts are adding further to the brownfield sector’s woes.

English councils’ contaminated land capital grants have been slashed and those for Welsh councils axed completely. And given the government’s deficit-reduction agenda, there is no prospect of the cuts being reversed any time soon (ENDS Report 435, p 33).

While private-sector developers continue to provide much of the demand for contaminated land and remediation consulting, activity undertaken by councils under the part 2A regime underpins the sector as a whole and the loss of funding for it is a
serious blow.

Moreover, the prospect of land remediation relief being abolished by 2012 is further undermining business confidence (ENDS Report 437, p 48). The tax break has been worth about £40m a year, to companies undertaking land remediation.

It offers relief from corporation tax on expenditure incurred in brownfield redevelopment, but its 2012 abolition would make some marginal projects less viable.

Taken together, these factors are all serving to undermine the prospects for many consultancies in the contaminated land and remediation sector.

“Any [consultancy] involved in construction, contaminated land and remediation via the planning regulations is at risk,” concludes Janet Murfin, director at environmental consultancy TT Environmental.

Contaminated land and remediation joins two other land and development-related sectors at the top of the list of areas perceived to offer poor near-term consultancy demand prospects; Ecological and landscape management was cited by a quarter of respondents and impact assessment (EIA/SEA) and planning by 22%.

Despite growing realisation of the need for ecosystems’ preservation in the face of pressure for development on finite land, it is clear that demand for consultancy services in this field is being hit by the downturn in development activity.

Over the longer term, consultancies see the demand-side evolving in a number of ways. One of the key factors is the move towards a low-carbon economy and the rising focus on sustainability considerations.

But the transition to a low-carbon economy is, by its very nature, a long-term development and the pace at which government and businesses respond will serve to influence the nature of consultancy services demanded.

Businesses, driven largely by reputation and cost-saving motives, are taking on more of a leadership role. And as important as policy and regulatory developments will remain, it is what businesses do in addressing the low-carbon and sustainability challenges that will increasingly shape the consultancy market’s longer-term evolution.