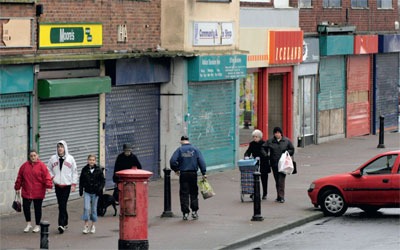 As the pressure for better environmental management has grown, so consultancies have found customers across virtually all types of organisations. Only the small and medium enterprises sector has remained stubbornly resistant to paying for advice or support. And thousands of small companies now get help through free services such as the Environment Agency’s NetRegs service and green business clubs and networks.

Of environmental consultancy’s many client groups, which are actively seeking support and which are pulling in their horns? Our survey sought to find out by asking respondents to identify client sectors perceived as offering the best growth prospects to 2015, and those offering poor growth prospects (see figure 4). 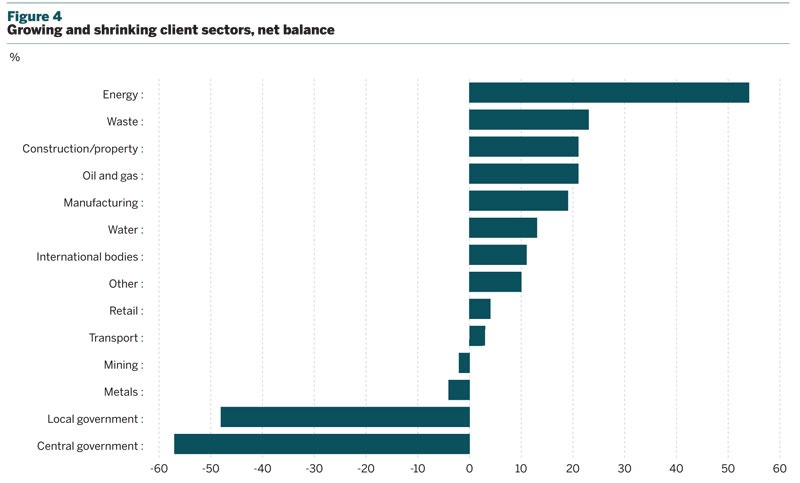 The most striking result by far is the widely held expectation that both central and local government will be constrained. Here we see writ clear the result of public spending cuts. All government bodies cut promotional and communications spending within weeks of the coalition government taking office. Now we see the tap being closed on more substantive work on developing and implementing environmental improvements.

In contrast, given the energy sector’s key role in the shift to a low-carbon economy, it was unsurprisingly cited as providing strong four-year demand prospects by almost three fifths of organisations.

And despite the current market weakness, many expect construction and property market activity to pick up over the next four years. Clients in these sectors were cited by half of consultancies as offering good demand growth prospects to 2015.

Conversely, one in four is pessimistic on the prospects to 2015. They see construction and property clients as offering poor demand prospects over the next four years.

Meanwhile, manufacturers are thought to offer growth opportunities by a third of consultancies. The sector’s importance to the UK economy has historically been shrinking, but its recovery prospects as the economy is rebalanced and investment picks up offers some cause for optimism.

Due diligence consulting is one of the areas likely to grow as the manufacturing sector picks up. Consultancies with clients in this sector are set to benefit accordingly.

Meanwhile, waste sector clients and those in the oil and gas industry are each seen as offering favourable four-year demand prospects by a quarter of consultancies.

Despite moves to low- and zero-carbon energy sources, the addiction to fossil fuels shows no signs of ending any time soon.

It is clear that oil and gas sector clients will continue to be important to many ­environmental consultancies over the longer term.

Somewhat surprisingly, given its budgetary constraints, local government was also tipped by a fifth of consultancies as a client sector likely to exhibit buoyant demand growth to 2015. Continuing legislative pressures on local authorities, such as taking further steps to reduce the land-filling of biodegradable municipal waste, are likely to be important factors here.

But positive expectations of local government are greatly outnumbered by those seeing this client sector as offering poor demand growth prospects over the next four years.

Not surprisingly, it is the scale of the public spending cuts pencilled in to 2015 that is causing consultancies to be bearish on demand prospects from the public sector. “There are some worrying times ahead, especially for consultancies that are more dependent on public sector clients,” says Jonathan Ben-Ami, Arup’s director of sustainability.

“Many of the spending cuts are yet to kick-in and it will be a patchy picture going forward,” he says.

Finally, one in seven consultancies sees retail sector clients in a similar way. Retailers have come under particular pressure in the past two years, hit by the squeeze on real disposable incomes, the shift to on-line shopping, soaring rents and intense competition.

For many retailers, expansion plans have been ditched or put on ice, alongside plans for new development. Moreover, several high-street names have gone to the wall recently and others are struggling to
survive. The sector as a whole faces a protracted period of restructuring.

And for as long as consumers’ incomes remain stretched, the retail sector seems set for slower growth over the longer term.

It seems clear that retailers will offer little joy for environmental consultancies seeking robust demand growth for their ­services.