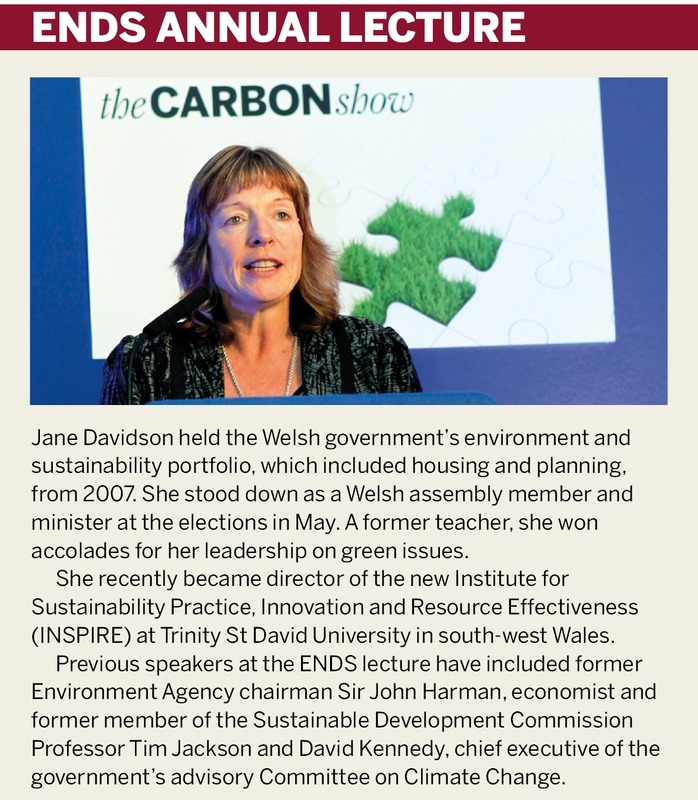 I want to take us on a journey looking at quality of life and community wellbeing in one small country committed to the sustainability agenda. That country is Wales.

When the newly devolved Welsh Assembly Government came into being in 1999 it had a unique duty, under the founding Government of Wales Act, to create a scheme of how it proposed to promote sustainable development in the exercise of its functions. Progress on the scheme must be reported annually to members and any incoming administration must review its effectiveness.

This was seen as an extremely innovative and exciting duty representing a new kind of democracy, and it was supported by assembly members of all parties. But there was no definition of sustainable development.

Broadly, there was support for what is usually known as the ‘Brundtland’ definition, after Gro Harlem Brundtland who chaired the World Commission on Environment and Development. The commission came up with a description of “... development that meets the needs of the present without compromising the ability of future generations to meet their own needs”.

It developed the concept of ‘needs’, in particular the essential needs of the world’s poor, to which overriding priority should be given. It also enshrined the idea of limitations imposed by the state of technology and social organisation on the environment’s ability to meet those present and future needs.

But how was this to become real? At the Earth Summit in Johannesburg in 2002, Wales became a founding member of Nrg4SD, a unique global network of regional governments promoting sustainable development.

This is an important tier for practical action. Jonathon Porritt, then chair of the Sustainable Development Commission, said, “Wales and Scotland may well be close to the Goldilocks (‘just right’) scale for doing sustainable development. A common refrain from policymakers in Edinburgh and Cardiff is that it is much easier than in Whitehall to bring all the relevant stakeholders round the table, to grasp the linkages between production, consumption and wellbeing at the heart of a rigorous understanding of unsustainable and sustainable forms of development.”

It is certainly true that the experience of other Nrg4SD members, the development of the innovative Wales for Africa programme as a contribution to millennium development goals and our  commitment to fair trade have all helped successive Welsh governments develop a greater understanding of sustainable development in the Welsh context.

Wales moved from the development of high-level indicators on the economy, social justice, environment, the ecological footprint and wellbeing – in recognition of the need for metrics against which real performance can be measured – to articulating values and the policy direction needed to underpin those values.

If we take the ecological footprint as an example, we see that paradise truly is being lost on our watch when we discover that humanity’s demand on the planet exceeds the earth’s regenerative capacity by about 30%. This demands action.

Underneath each high-level indicator is a set of policy actions to contribute towards ‘sustainable resource use’, ‘sustaining the environment’, a ‘sustainable economy’, a ‘sustainable society’ and the ‘wellbeing of Wales’. In what is the UK’s poorest nation, it is increasingly the latter that is coming to the fore. A disproportionate number of people in Wales work in the public sector and are at greater risk as public finances dry up.

In 2005, the now sadly defunct Sustainable Development Commission worked with governments across the UK to produce One Future-Different Paths.1 This proposed a shared UK understanding of sustainable development with a common purpose outlining what we are trying to achieve and guiding principles to achieve it. Its underpinning principles were achieving a sustainable economy, promoting good governance, using sound science responsibly and living within environmental limits.

Having expert advice from the commission was critical in generating cross party support for this agenda in Wales. In 2009, the Welsh government published One Wales: One Planet,2 its current ‘scheme’ concerning sustainable development, which described a sustainable Wales as a country that:

This was a seminal document. It was the first scheme since the introduction of the sustainable development duty 10 years earlier to articulate a collective commitment from all ministers to use sustainability as the central organising principle of government.

Previous schemes had included individual actions, but this made an explicit commitment to bring down Wales’s ecological footprint to its fair share within a generation.

More importantly, as the Welsh government wrestled with another all-party commitment – how to reduce greenhouse gas emissions by 3% a year to contribute to UK climate change targets by 2050 – it found that framing that debate in the context of sustainability created greater political consensus.

To make sustainable development real, it must be outcome focused. Is that political commitment to have sustainability at the heart of government policymaking actually delivering different outcomes through the civil service?  The Welsh auditor general decided to investigate whether the sustainable development concept was adequately embedded in the government’s own business practice. The results found room for improvement.

Separately, WWF Cymru commissioned a piece of independent research looking at ministers’ policy commitments and whether they were actively delivering on the overarching agenda.

Once again this showed a mixed picture, although for the first time key policy decisions were being taken in Wales on waste, climate change, housing retrofits, planning, education and health which were directly linked to sustainable development and were inherently different from decisions taken elsewhere in the UK.

Three key lessons emerged. First, that the duty was supported across all parties, as were the regular reporting arrangements which kept the issues in front of assembly members.

Second, that the regional government level close to its population is probably the best for delivering sustainable development. And third, that existing legislation from the Government of Wales Act was inadequate to deliver systemic change.

As a result, the Labour party, in its manifesto for the Welsh government election last May, outlined its vision for “a sustainable Wales to become a ‘one planet’ nation by putting sustainable development at the heart of government; creating a resilient and sustainable economy that lives within its environmental limits and only using our fair share of the earth’s resources”. 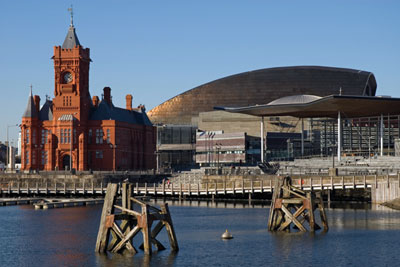 That commitment is now being taken forward. Carwyn Jones, first minister of Wales, announced in June that the government would “legislate to embed sustainable development as the central organising principle in all our actions across government and all public bodies”. He also announced that this legislative commitment would be monitored externally by a new, independent sustainable development body for Wales following the demise of the UK-wide Sustainable Development Commission.

Interestingly, the environmental lawyer and academic Andrea Ross published an article last year arguing that “the UK is now at a stage where specific legislation is required to drive the implementation of sustainable development further forward”.Such legislation, she wrote, “could potentially address many of the current shortcomings by increasing the priority, support and protection afforded sustainable development across governments as a long term policy objective”.

It could “turn what is now, at best, good practice into meaningful legal obligations, supported by monitoring and review mechanisms which impose significant consequences for failure”. And it would set out how tools such as environmental assessment, procurement practice, research funding and public consultation relate to sustainable development.

I absolutely agree with this analysis. Her legal journey and our political journey in Wales reached a consensus around the same time. To sum up:

So what would a sustainable Wales look like? A cross-party vision was agreed in One Wales: One Planet last year: “Across society there is recognition of the need to live sustainably and reduce our carbon footprint. People understand how they can contribute to a low carbon, low waste society. These issues are firmly embedded in the curriculum and workplace training.

“People are taking action to reduce resource use, energy use and waste. They are more strongly focused on environmental, social and economic responsibility, and on local quality of life issues, and there is less emphasis on consumerism. Participation and transparency are key principles of government at every level, and individuals have become stewards of natural resources.”

This is a vision about taking control of our future and our children’s future. The question is ‘Would you want to live there?’ This is not a question about a physical Wales – much as I could advocate its undoubted charms – but a virtual Wales, a country which was at the forefront of the 19th century carbon revolution and is determined to pay its debt by being at the forefront of a more sustainable world.

Mark Twain once said: “If you always do what you’ve always done, you’ll always get what you’ve always had.” That is no longer good enough. I believe seeing life though a sustainability lens enables better decision-making and provides the moral compass linking our activities with effects across the world.

Wakes has run the largest retrofitting housing programme including renewables in disadvantaged areas in the UK; it has continued to focus on fuel poverty when budgets have been removed elsewhere; its health policy is focused on prevention; education for sustainable development and global citizenship is a mandatory element of the Welsh education system.

We have to start from where we are and a small, smart, well-connected country with a new, devolved governance system may just be the place to test and develop systems fit for the future.

I hope Wales’ example will be taken to the Earth Summit in 2012 and will inspire others to embark on the same journey. I have not found another country with this organised commitment to institutionalise sustainability in legislation, and I hope that the Welsh experience, with its failures and successes, will help others. Not quite paradise regained, but a recognition that this earthly paradise is worth saving.

The legislation will take time to make and is anticipated to reach the statute books by 2013. I hope that leading thinkers and practitioners of sustainable change and innovation will share their time, insights, experiences, hope and fears so that the pathway to country-scale transformation is a shared one.

As Charles Darwin said, “It is not the strongest of the species that survives, nor the most intelligent, but the one most responsive to change.”

Download a PDF of this feature on the right or read the full text of the lecture at www.endsreport.com