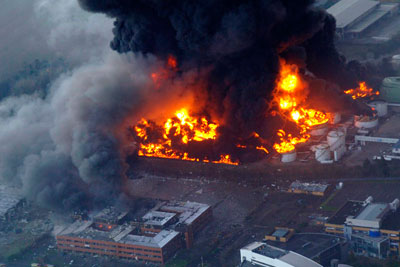 Five companies were fined a total of £5.3m in July for their role in the largest peacetime explosion in Europe and the resulting groundwater pollution. Costs added £4m to the bill.

The incident at the Hertfordshire Oil Storage Ltd (HOSL) Buncefield site in Hemel Hempstead in December 2005 injured 43 people and damaged hundreds of buildings. Chief executive of Dacorum Borough Council Daniel Zammit had said it was “miraculous no one was killed”.

Groundwater was polluted with unburnt fuel and perfluorooctane sulphonate, a toxic and persistent surfactant used in fire-fighting foam (ENDS Report 395, p 19). Drinking water boreholes were shut down after the explosion, but have since been reopened after pollution fell to within legal levels.

The companies involved, including Total, HOSL and British Pipeline Agency, were sentenced at St Albans crown court on 16 July after entering their pleas at a hearing in November 2009.

Total, an oil industry giant and majority owner of HOSL, was fined £3m after pleading guilty to health and safety charges.

The company has already paid out millions in compensation. Earlier this year the Court of Appeal confirmed it was wholly liable for civil damages, estimated at £750m (ENDS Report 422, p 6). It had tried to transfer some liability to Chevron, its minority partner in the oil storage company.

HOSL denied a charge of failing to take necessary measures to prevent major accidents and limit their environmental impact, under section 4 of the Control of Major Hazards Regulations 1999, but was found guilty and fined £1m.

After this decision, it changed an earlier not guilty plea for polluting controlled waters to guilty and was fined £450,000 with costs set at £1m.

British Pipeline Agency Ltd pleaded guilty to identical charges to HOSL. Presiding judge Mr Justice David ­Calvert-Smith said while the company bore no responsibility for the explosion, firewater had escaped from its defective bunds. It was fined a total of £300,000, with £480,000 costs.

TAV Engineering Ltd and Motherwell Control Systems 2003 Ltd, which had respectively designed and maintained a defective switch partly responsible for the disaster, were fined nominal sums. They reconstituted themselves after the explosion and now trade under new names.

Mr Justice Calvert-Smith said he had difficulty deciding the sentences, outlining a complex series of aggravating and mitigating factors, including attitudes to safety, the unprecedented nature of the explosion and payment of compensation.

But he concluded the firms had shown “slackness, inefficiency and a more or less complacent attitude to safety”.

The water pollution fines, totalling £1.35m, add up to the largest penalty imposed in the UK for environmental offences. Shell held the previous record of £1m, received in 1990 for leaking oil into the river Mersey.1

Nevertheless, Mike Penning, MP for Hemel Hempstead and a junior transport minister, said the fines were “an insult to my constituents”.

He intends to write to the Attorney General asking him to consider whether the fines are too lenient. However, the Attorney General’s power to do this is restricted to offences such as murder, robbery and child cruelty, meaning the sentences will remain fixed.