Installation of heat pumps needs to significantly improve if their potential to cut carbon emissions is to be realised, according to the Energy Saving Trust (EST).

There were more than 10,000 heat pumps operating in the UK in 2008, the EU’s latest Euro­bserver report found.1 The last government said pumps could supply 4% of heat demand by 2020.

The devices work like fridges in reverse. A low boiling point fluid is circulated in pipes to absorb heat from the air or ground, becoming a vapour. It is then compressed back to a liquid, at which point it gives up heat which is used to warm buildings and water. The pressurised liquid is then allowed to decompress, becoming a cold vapour which circulates again through the air or ground to absorb more heat.

In September, the EST published results of a year-long field trial of 54 ground-source and 29 air-source pumps.2  The trial included units installed under the Low Carbon Buildings Programme  – the previous government’s grant scheme for microrenewables – and the Carbon Emissions Reduction Target (CERT) which requires the big six energy companies to improve the energy efficiency of customers’ homes. 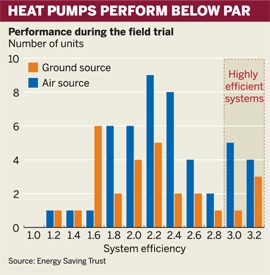 A “well-performing” heat pump should have a ‘system efficiency ratio’ (SFR) of at least three, the report says. This means that for each unit of electricity it consumes, it should produce at least three units of heat.  But only four (14%) of the air-source, and nine (19%) of the ground-source, pumps, achieved this (see figure).

“Many systems appeared to be installed incorrectly,” the report says. This could include under- or over-sizing of units.

The EST will look at the cause of each pump’s poor performance in the trial’s second year. But it has already decided that installers need advice; guidance will be published in the autumn.

Pumps could also be performing below expectations because of the way they are operated by consumers, the report says. Many people found the controls hard to understand and the EST says they need to be “comprehensively reviewed”.

The EST also intends to examine the impact of hot water production on heat pumps. A heat pump needs to be able to reach a higher temperature if it is to supply hot water as well as heat.

ENDS contacted several major heat pump manufacturers about the findings. All said they took every effort to ensure installers were properly trained.

Mitsubishi, which has installed more than 6,000 air-source pumps in the UK, was typical. In a statement, it said: “We have always insisted that our installers attend product-specific training. We therefore welcome the EST’s call for a training and standards roadmap and would also support the establishment of minimum compulsory standards.”

The poor performance of some pumps could also have wider implications for the UK’s target for 15% of its energy to come from renewables by 2020. The European Commission is developing criteria for when heat pumps count as renewable energy devices. Current proposals require an SFR of 2.6, according to Roger Nordman of the Swedish SP Technical Institute, who peer-reviewed the EST study. Only 26% of the units in the trial met that level.

However, the commission would probably simply require devices to meet the standard in laboratory tests rather than require auditors to monitor installations.

In spite of the problems experienced, the EST report is overwhelmingly positive about heat pumps’ potential. A well-installed unit would save 280 kilograms of CO2 a year when replacing a gas boiler, it says, and one tonne of CO2 a year if replacing an oil heating system.

It “particularly recommends” heat pumps be installed in the five million UK homes not connected to the gas grid and new-build properties. If installed in all off-grid homes, they would save 10 million tonnes of CO2 a year – equivalent to almost 1.7% of UK greenhouse gas emissions.

It points out that the government does need to support devices using the proposed renewable heat incentive. Without this, pay back could be as long as 47 years if they are replacing gas central heating.