At 391 parts per million of carbon dioxide, the atmosphere’s energy level is now consistent with recent warm periods in the Earth’s geological history.

During the early to mid-Pliocene period 5.2-2.8 million years ago, CO2 levels rose to about 350-410ppm, global temperatures were about 2.4-4.0°C above the 18th century and sea levels were about 25 metres higher than today.

Since the 18th century a 3-4°C rise in polar temperatures has accelerated the melting of Arctic Sea ice and the Greenland and west Antarctic ice sheets, driving the Earth towards the climatic conditions of the mid-Pliocene period. The increased rate of sea-level rise from about one millimetre per year early in the 20th century to about 3.5mm/yr today suggests climate change is accelerating.

The Earth’s atmosphere acts as the lungs of the biosphere. It forms a thin breathable veneer about one thousandth of the Earth’s diameter, allowing an exchange of carbon gases and oxygen with plants and animals. These in turn affect the atmosphere, for example through release of photosynthetic oxygen and methane.

As testified by the geological record, nearly all of the previous mass extinctions of species throughout Earth’s history have been associated with a rise in CO2, methane and hydrogen sulphide, injection of aerosol and dust, ocean acidification and low oxygen levels.

Greenhouse gases in the atmosphere alter the balance between energy entering from the sun and reflected heat escaping. Changing concentrations modulate temperatures and, in turn, generate feedbacks from the water cycle and the biosphere. Significant rises in atmospheric CO2 levels trigger the release of CO2 from warming water, interaction of ice melt with warm water and a decline of reflective ice, further increasing the heat absorbed by exposed water.

Further release of CO2 from warming oceans and the drying and burning of vegetation shifts global climate zones toward the poles, warms the oceans further and induces acidification. The essential physics of the radiation absorption and emission properties of greenhouse gas molecules, indicated by observations in nature and laboratory studies, is manifested in the relationship between atmospheric CO2 and average global temperature projections.

Lost in the climate debate is an appreciation of the delicate balance between the physical and chemical state of the ­atmosphere-ocean-ice-land system and the evolving biosphere. This balance controls the emergence, survival and demise of species, including humans. Species capable of adapting to long-term environment change may be unable to survive runaway climate change and climate tipping points expressed by extreme weather. 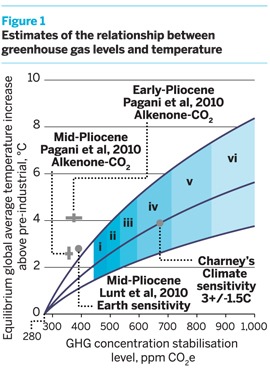 Greenhouse forcing is rising at a geologically unprecedented rate of 2ppm of CO2/yr – excepting the release of CO2 associated with major volcanic events and meterorite impacts. And with polar temperatures (3-4°C) tracking toward early to mid-Pliocene-like conditions (see figure 1), the atmosphere-ocean system is in unchartered territory, possibly but hopefully not beyond human control.

It is yet possible that the climate may reach conditions similar to the mid-Miocene period, when sea levels were around 40 metres higher; or even the Paleocene-Eocene Thermal Maximum period 55 million years ago, when a release of about 3,000 gigatonnes of methane resulted in a greater than 5°C temperature rise and the extinction of species.

Reaching these levels would depend on further burning of the world’s fossil fuel reserves (which hold about 12,000Gt CO2), the scale of land-clearing and deforestation, feedbacks from the carbon cycle and ice and warm water interactions, reduction of the ocean’s CO2 absorption capacity and release of methane from permafrost, bogs and shallow sediments.

The potential consequences of a 4°C mean global temperature rise for human habitats defy contemplation. However, the combination of a number of emergency measures offer a chance to avert irreversible climate tipping points.

Should humanity choose to invest its remaining resources in replacing polluting activities with clean renewable technology, coupled with a massive effort to draw down atmospheric CO2, reforestation and extensive application of biochar, instead of continuing on our current path, there is a chance that a runaway climate crisis could still be averted. This choice represents the hour of truth in the short history of Homo sapiens.

It is not widely realised that with atmospheric CO2 levels at 391ppm (or about 460ppm of CO2e including methane) and rising by about 2ppm CO2/yr, the upper stability limit of the large polar ice sheets has been met. These ice sheets act as the Earth’s climate “thermostats”, affecting air circulation patterns, rainfall and the cold ocean currents around California and west Africa.

The transition from the relatively stable Holocene period, which started about 11,700 years ago, to projected climate conditions above 2°C would involve an increase in the range of the El Niño Southern Oscillation (ENSO) cycle, a rise in the frequency of the warm El Niño and a decrease in the occurrence of the cool La Niña phases.

The warming could also be followed by a transient drop of temperatures, due to the cooling effects of melting ice on the oceans, as recorded for the Younger Dryas period (12,900–11,700 years ago) and the Holocene Optimum period (about 8,200 years ago).

Since the 18th century, mean global temperature has risen by about 0.8°C. Further rises by 0.5°C are masked by industrial-emitted sulphur aerosols. Satellite information shows that ice sheets in Greenland and western Antarctica are shrinking and in some places are already in a runaway melting mode.

A new study using 50 million laser readings from a NASA satellite to calculate change in the height of the ice sheets, found these were especially thinner at their edges, where warmer water eats away from below. In some parts of Antarctica, ice sheets have been getting thinner by ten metres a year since 2003.

Sea level rise is a reflection of all other components of climate change. Since the early 20th century, the rate of rise increased from about 1mm/yr to about 3.5mm/yr by 2009, representing a nearly four-fold increase in the rate of global warming since the industrial age began.

According to one study in 2008, led by Jonathan Overpeck from the Department of Geosiences at the University of Arizona: “Sea-level rise from melting of polar ice sheets is one of the largest potential threats of future climate change. Polar warming by the year 2100 may reach levels similar to those of 130,000 to 127,000 years ago that were associated with sea levels several meters above modern levels; both the Greenland Ice Sheet and portions of the Antarctic Ice Sheet may be vulnerable. The record of past ice-sheet melting indicates that the rate of future melting and related sea-level rise could be faster than widely thought.”1 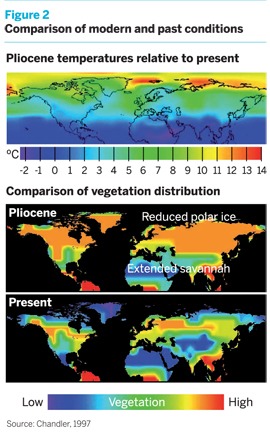 Studies of the early to mid-Pliocene and the mid-Miocene (about 14-16 million years ago) when continent-ocean patterns were similar to now, allow correlations of atmospheric CO2 levels, mean global temperatures, sea levels and other parameters, with implications for current climate change trajectories (see figure 2).

During the early and mid-Pliocene periods, the tropics expanded and subtropical zones migrated toward the poles, extending savannah regions and allowing humans to migrate. Warmer ocean currents contributed to the warming of high-latitude zones and spread of boreal forests toward the Arctic circle. 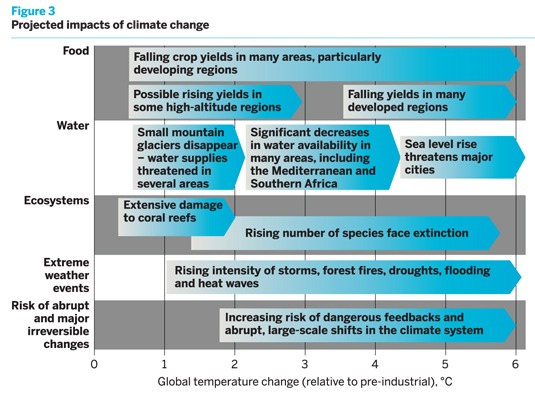 However, under present conditions, the drying of temperate mid-latitude zones, sea-level rise and flooding of delta and low river valleys, would deprive the world of the bulk of its agricultural potential (see figure 3).

Estimates can hardly be made of the consequences of the related release of thousands of billion tonnes of methane currently trapped in permafrost, shallow sediments and bogs.
Much like a mountain climber suffering from altitude sickness, the world needs to urgently come down from its current CO2 level of 389ppm, to no more than 350ppm – but likely to 320ppm – before it is too late.

Feeble attempts by civilisation to mitigate the climate are drowning in a tide of medieval conspiracy theories by man-over-nature ideologues. There is nowhere else for the 6.5 billion of contemporary humans to go, not even the barren planets – the exploration of which space agencies are pouring more funding into than governments have allocated for environmental mitigation to date. Nor would the discovery of Martian bacteria compensate for the loss of the rainforests and coral reefs.