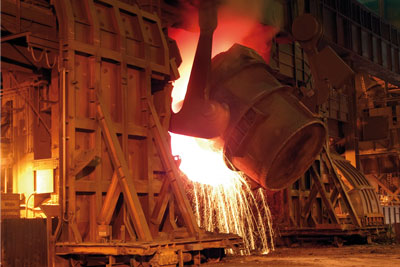 A report by Cambridge Econometrics commissioned by the energy and climate department (DECC) has found the threat to UK heavy industry from foreign competition is not significantly intensified by the European Union’s emissions trading scheme (EU ETS).1

Only industrial sectors where carbon intensity and exposure to international competition are moderate to high are at substantial risk of ‘carbon leakage’, it says. And it adds that the most vulnerable sectors are those where there is little product differentiation.

The report notes that there are also extra  costs from wider climate policies in the EU that could affect competitiveness, but these were outside the remit of the study.

In phase III of the EU ETS from 2013, there will be up to 100% free allocation of allowances for industrial sectors most at risk from foreign competition, subject to meeting best-in-class technical benchmarks for emissions that have yet to be agreed (ENDS Report 425, pp 38-42). Other sectors will get a gradually de­clining portion of free allowances un­til they are phased out altogether in 2020.

Benchmarks and allocations to vulnerable sectors must be finalised by the end of 2010, and have been delayed due to wrangling over both benchmarking criteria, notably in the steel industry (ENDS Report 428, p 53), and over rights to more free allowances.

The Cambridge Econometrics report comes as an internal commission document on free allocation and benchmarking proposals is being circulated for discussion.

The report notes the European Commission criteria for identifying sectors at risk of carbon leakage are “fairly robust”, but that the thresholds chosen select too many sectors and fail to emphasise those which are  at greatest risk from competition.

Another key finding is that free allowances are more effective than border adjustment measures such as import taxes in avoiding carbon leakage. This is because in most cases the threat is to the export market rather than product substitution in the domestic market. But the report adds this conclusion depends on the market value of freely allocated EU emission allowances not being passed through to consumers.

The report assessed the impact of four climate policy scenarios on carbon leakage using loss of domestic industrial production as a proxy.

First would be the current situation with the EU’s 20% emissions cut target by 2020 relative to 1990 with no comparable action elsewhere. Second and third, a 20% and 30% EU target with action at the lower range of emissions pledges under the Copenhagen Accord, and finally a 30% target with 80% free allowance allocation.

Overall, it finds that the low-end pledges under the accord will have negligible impact in offsetting production losses, or shrinkage, for the 14 sectors assessed. But more encouragingly it also finds that an EU move to 30% would only have “a very small impact” on all but three sectors, and that even here the impact would be modest.

But iron, steel and ferro-alloy production (see picture) would not benefit since free allowances would not help to offset higher electricity prices, it stresses.

Cambridge Econometrics also points out these results can only give an indication of the effect of carbon leakage, and a more accurate analysis would need to take into account cost impact of all climate policies.

The report comes as Dutch energy and environment consultants CE Delft have concluded that heavy industries covered by the EU ETS receiving free allowance allocations will continue to make windfall gains from them in its third phase between 2013 and 2020.2

Earlier controversial research findings by the consultancy revealed that electricity producers and several heavy industries had made windfall gains from freely allocated EUAs in the first and current phase of the EU ETS.

This is because they have a market value and are considered as assets, so the opportunity cost to the company of surrendering them for compliance rather than selling them is frequently passed through to consumers. As they are freely allocated by government, this results in a windfall gain.

The claim has been angrily rejected by heavy industries that have been hit hard by recession, though many were forced to sell off unused allowances to stay in business in 2009 (ENDS Report 409, pp 12-13).

But the research now suggests that even with tighter allocation rules and more auctioning of allowances from 2013, including full auctioning for the power sector, there will still be plenty of opportunity for heavy industries to make windfall gains.

CE Delft notes that introducing benchmarks in phase III will force less efficient firms at the margins of profitability to pass through in full the cost of buying extra allowances in their product prices. It says this introduces higher overall prices in product markets, benefiting more efficient operators, “which most likely will cause windfall profits for non-marginal companies”.

The study suggests that the impact of higher costs on European consumers and on the bloc’s international competitiveness can be reduced by auctioning a bigger share of emission allowances and by then reinvesting the revenues from auctions into subsidising energy efficiency measures in industry.

The European Commission has still to finalise benchmarking proposals under phase III of the EU emissions trading scheme for key sectors, including steel and glass.

We have an exciting opportunity for you to join our team at our head office in Warrington, you will establish the long term plans to secure water quality for future generations in the North West.

If you are an organised, conscientious, hardworking individual, who works well as part of a team and is passionate about making a difference for the environment, then we’ve got the job for you!