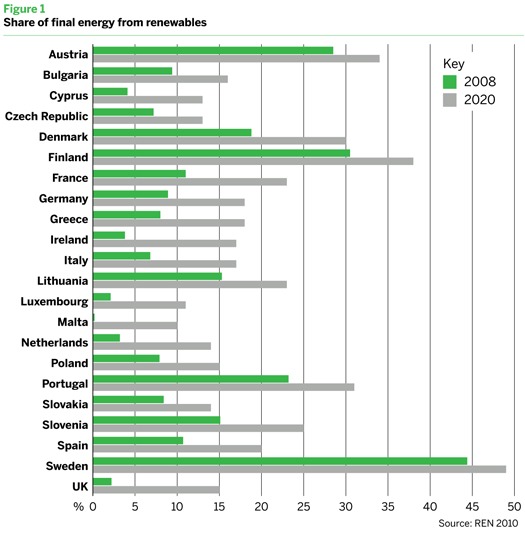 European member states are setting out goalposts but leaving ample room for manoeuvre on the path leading to their stated 2020 renewable energy targets. The plans reveal that most countries expect to meet their commitments with varying degrees of ambition. A common criticism, however, is that they provide precious little detail on how exactly to get there.

Some countries, including Sweden, Finland, Spain and Germany, predict they will generate more energy from renewable sources than their EU targets require. This means they will be in a position to help struggling member states through the cooperation mechanisms the renewable energy directive prescribes.

Others, including Italy and Luxembourg, admit to a shortfall and will likely become the recipients of cross-border cooperation.

Leaving aside the possibility of imports from other countries, member states can achieve their targets through adjusting their overall energy mix by introducing renewable sources into the electricity grid, the heating and cooling sector and transport, and encouraging energy efficiency practices that reduce their total energy use.

Germany, traditionally an EU leader in solar installations technology and with strong ambition for biomass in the heating and cooling sector, plans for 19.6% of its overall energy share to come from renewable sources in 2020. However, this relies on efficiency measures reducing overall consumption by 7.7% against the reference scenario. If the energy efficiency drive did not succeed, Germany’s renewables share in 2020 would amount to 18.2%.

Spain has ambitious plans for an overall renewables share of 22.7% in 2020, despite recent government reluctance to commit to continued support for high feed-in tariffs for wind and solar power. But one question mark looms large: will Spain be able to upgrade its grid connections to allow cooperation with other countries?

The Irish government is predicting a small surplus of green energy in 2020. Plans are under way to build an interconnection grid with Great Britain and cross-border connections with Northern Ireland. Energy transfers in the medium and long term are envisaged, but details are far from complete.
The UK’s 15% overall target for 2020 – given its very low starting point of 1.3% in 2005 – is extremely ambitious. In the electricity sector, for example, the share of renewables needs to rise from 4.7% to 31%.

Devil in the detail

The UK has been investing heavily in solar, biomass and especially wind power. Plans for next-generation wind turbines – such as floating turbines – are under way but the technology is expensive. Some experts consider them an unnecessary indulgence in trying to meet targets.

Another potential barrier to meeting objectives is uncertainty over the support mechanisms the sector will enjoy. The new coalition government has not yet clarified whether it will continue with the current renewables obligation system or shift to feed-in tariffs.

Sweden and Finland have high aims for increasing their renewable energy share. Unsurprisingly for its geographical characteristics, Finland aims to rely on wood products to meet more than half of its 38% target. The government considers the targets challenging but manageable. Forest sustainability is an issue, however.

Second-generation biofuel production is foreseen by 2015, with the government keen to use domestic biomass sources such as wood. However, the cost of producing liquid biodiesel from wood is uncertain and the competitiveness of this approach has yet to be tested against foreign imports.

Sweden estimates an overall renewables contribution of 52.2% in 2020. It is predicting a surplus of 486,000 tonnes oil equivalent in 2020 but has not released details of cross-border transfers or cooperation plans.
According to the Swedish government, any details on cooperation mechanisms will first be developed by the Nordic Council, an intergovernmental body that sets policies across Nordic countries. A renewable energy working group is looking into these issues and will report next year.

Denmark, having initially predicted a deficit of 337,000toe, now believes it will have a surplus of 63,000toe in 2020. Overall, the country envisages a 30% renewables contribution within a decade, to be achieved through more renewables and greater energy savings. In 2012, the Danish government will issue a progress report on how best to facilitate energy transfers to its neighbours and will consider joint projects.

In Italy, the plan was drafted by the economic development ministry, which has been without a minister for months. According to green campaigner Edoardo Zanchini of Legambiente, the plan does not enjoy the support of other key ministries, such as the treasury.

In most of the plans ENDS analysed, wind and solar power dominate growth over the next decade. Hydropower will retain its place as one of Europe’s leading sources of renewable energy but will only grow slowly. Biomass generation is set to increase, especially in the heating and cooling sector.

Wind power is the undisputed rising star in the plans. Germany plans to increase its wind capacity to 45,750 megawatts in 2020, from just under 28,000MW, mainly from onshore sites.

Spain is also planning a large increase from onshore wind farms, while the UK plans a more even distribution, with the final 27,880MW coming mainly from onshore (14,890MW) but also from offshore (12,990MW).

Denmark, an early pioneer of wind power installations, stands out with its plans to decrease onshore wind farm capacity while increasing offshore to 1,339MW by 2020.

France, Italy, Spain and Sweden – the largest generators of hydropower at present – are not planning to grow much beyond what is already installed.
Solar energy looks set to dominate in Germany, where capacity is planned to jump to 51,000MW over the next decade. Very significant increases are planned in Italy, Spain and to some extent France. Smaller markets like the Czech Republic and the UK could also perform quite well.

Analysing the plans and speaking to experts, its has emerged that technology choices depend on political and strategic reasons as much as more obvious ones based on natural resources or geographical characteristics.

For example, France is keen to build integrated photovoltaics (BiPV), which eases the integration of PV in buildings and therefore public acceptance. Some experts consider BiPV unreasonably expensive compared with other PV technologies. But others point out that, once the money saved by not using conventional building materials is factored in, the expenditure can be considered an investment for the future.

Industrial policy may be an extra driver for BiPV because the French industry is better represented in this technology, according to Gaëtan Masson of European PV association EPIA.

Mr Masson believes the French government is keen to support emerging technologies where France can play a major role. As a result, it has introduced a specific feed-in tariff for BiPV, set at €0.37-0.58 per kilowatt hour. Italy is the only other EU country to have introduced such a feed-in tariff.

Spanish plans to significantly increase wind power capacity are not ambitious enough, according to some observers. “Five thousand megawatts of offshore capacity might sound optimistic, but history here shows that ambitious targets can be achieved and surpassed,” says Heikki Willstedt of wind sector association AEE.

But this viewpoint does not take into account the current economic climate, others have noted. Wind power is an expensive start-up technology that also requires large infrastructural changes.

Ireland is reviewing planning legislation to facilitate installation of onshore wind farms. These are cheaper than offshore installations but are more likely to come across other obstacles, for example nature protection laws because the most suitable locations for wind farms are often on protected Natura 2000 sites.

Germany is leading the way in wind and solar installation. But some commentators are not overwhelmed by the government’s ambition – an opinion further reinforced by its recent decision to postpone the shutdown of several nuclear power plants.

Having removed a number of obstacles to wind farm expansion, the German government can potentially look forward to a large-scale increase in wind power installations. But industry associations say the plan’s targets are too weak: the German wind association, BWE, contends that another 10,000MW could be achieved on top of the government’s figures.

Despite ambitious growth plans for wind and solar capacity, and uniquely good growth for hydropower too, the Spanish government is being criticised for a lack of political will to truly support renewables.

Critics say the solar and offshore wind targets are less ambitious than they could be because the government is finding it politically difficult to justify the higher feed-in tariffs these technologies attract. Both Spain and Italy are cutting subsidies for solar.

By 2020, Spain and Italy’s combined solar power capacity should be nearly four times what it is today. And yet Italian experts have complained of a lack of ambition for photovoltaics, which they say exposes the country to expensive renewable energy imports.

Falling feed-in tariffs are affecting German photovoltaics too. Some experts believe demand could fall within the next few years if electricity prices increase.

Plans to use more biomass for heating are in place in countries with a long tradition and solid infrastructure to support these developments, for example Sweden and Finland. Progress appears much slower in countries where this type of infrastructure is nearly non-existent.