Big disparities exist between countries when it comes to the ambition of targets in the different sectors of heating and cooling, electricity and transport. The measure of how much farther each country will go is largely determined by how developed these sectors are today.

Ironically, member states with the lowest 2020 targets have the most ambitious plans. Countries such as Poland, the Netherlands and the UK, which are starting from a low level of renewables penetration, have a long way to go to reach their targets required under the renewable energy directive.

The plans submitted by countries such as Austria and Sweden, which have targets four times as high as the Netherlands or the UK, are far less onerous because they are already starting from such a high level. This is clearly visible in a breakdown by sector.

Across member states, targets for electricity are the highest and plans for increasing renewable energy in electricity generation are the most clearly laid out. Targets for heating and cooling are generally the second highest, but concrete policies for attaining these targets are often lacking. Targets for renewables in the transport sector are low across most member states, with few clear policies that would result in a significant uptake in biofuels or electric vehicles.

Heating and cooling: a challenge 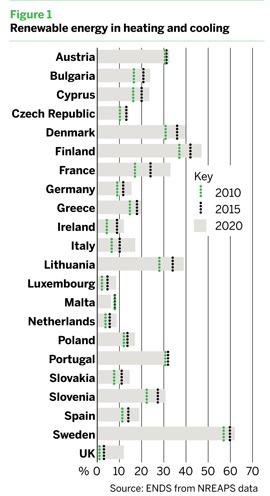 The Netherlands has a 2020 target for the sector of just 8.7%, and the UK and Ireland each have a target of 12%. By contrast Denmark, where district heating is very important, has a 2020 target of 39.8%. That number might seem unusually high, but renewables already make up 30.8% of heating and cooling in Denmark. The country’s 2020 target involves growing by less than a third.

In the UK, where renewables make up just 1% of heating and cooling, the target requires a 12-fold increase in renewables in the sector. But is it realistic? “The target for heating and cooling is very aggressive because district heating doesn’t exist in the UK,” says Ronan O’Regan, an energy and utilities analyst with PricewaterhouseCoopers. “The new coalition government has been basically silent on what they’re going to do about renewable heating.”

The UK’s action plan does not contain any precise measures to achieve this ambitious target. The previous Labour government planned to bring in a ‘renewable heat incentive’ from next April, but the new Conservative–Liberal Democrat coalition government has not indicated whether it will be introduced. “If they do decide to keep it and it were implemented well, it could be enough to meet the 12% target,” says Gaynor Hartnell, chief executive of the Renewable Energy Association. “But if they’re not going to keep it, the coalition government hasn’t suggested any alternative policies.”
Germany has set a goal of 15.5% renewables by 2020, representing a 72% increase from today’s 9%. Renewables advocates have criticised Germany’s target for being  similar to other countries that are starting from much lower district heating penetration.

Martin Bentele, spokesman for the German Renewable Energy Federation (BEE), says a target of 25% would be both achievable and realistic: “The heating sector accounts for more than half of energy consumption in Germany,” he says. “There is an urgent need for a change to renewables [in that sector], otherwise it will be difficult to reach the German climate protection goals.” BEE is calling for a renewable heat premium modelled after the feed-in tariffs for solar power.

The transition to heating and cooling is not easy: “We have to take stock of the existing system and acknowledge that it needs to change radically,” says Marco Pezzaglia of Italian renewable energy association APER. For a country that relies heavily on natural gas for its heating, replacing this with a source that is distributed locally, for example biomass, is very complex. According to Mr Pazzaglia, costs will be significant but are not the only problems that need addressing. “Optimising the new system will require a lot of hard work,” he told ENDS.

By far the most ambitious targets – and the most concrete policies – have been set in the electricity sector.

Eastern European countries are generally starting from the lowest points. Poland has a renewables share of just 6.2%. Lithuania has 8%, and the Czech Republic has 7.6%. They have set 2020 targets of 19.43%, 21% and 12.7% respectively, roughly double or triple their current share. But it is unclear whether the policies listed in the plans can deliver this growth.

Europe’s renewable energy leaders, which are already starting from a relatively high base, have tended to commit only to modest growth over the next ten years. Finland, which currently has a 26% share of renewables, has set a 2020 target of 33%.

Sweden, whose hydropower capacity has given it a 2010 share of 54.9%, has set a 2020 target of 62.9%. Austria, which also has a massive hydropower infrastructure, has a 69.3% renewable share in its electricity sector today. But at 70.6%, its target for 2020 essentially commits it to no growth in renewables within the electricity sector for a decade.

It is easy to understand why countries that are already close to the Renewable Energy Directive’s requirements would not want to commit to extra growth unnecessarily. But environmentalists and politicians in the Nordic countries and in Austria are disappointed with ambition levels in action plans, especially when compared with those of other EU member states that are starting from much lower levels. 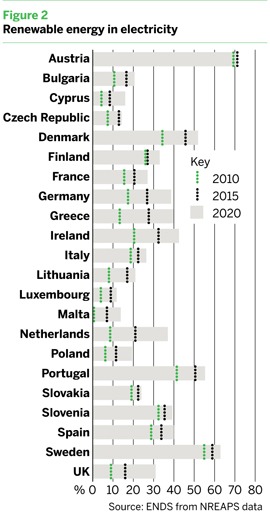 Lauri Myllyvirta, energy spokesman for Greenpeace in Finland, is disappointed with his country’s targets. “The target for electricity is pathetically low, due to the Finnish government’s present philosophy of taking care of electricity demand through major investments in nuclear capacity,” he says. “Some increases are projected for wind power, but these are quite unambitious – as are targets for using forest biomass to generate electricity.”

Nobody can accuse the UK of low ambition. With renewable energy currently contributing just 9% to electricity generation, the 2020 target has been set at 31%.

The British government has put most of its eggs in one basket: offshore wind power. Mr O’Regan says that, because of the UK’s huge potential for wind power, offshore wind would be enough to deliver the targets if the financing could be found. “Delivery of a few offshore wind farms could achieve this target,” he says. “This will be the easiest sector for the UK to meet [its targets].”

The Netherlands’ target is ambitious but experts question whether current policies can deliver it. Because the Dutch have favoured coal plants, their renewable energy share rests at just 8.6% in 2010. The action plan sets a target of 37% by 2020, representing a 430% increase in ten years.

Such an ambitious target would be a stretch at the best of times, but it is even more of a challenge now because there is currently no Dutch government and ongoing coalition talks are pointing at a likely minority coalition between Conservatives and Liberals. The latter party has been sceptical of climate change and renewables policies.

Neighbouring countries have far more realistic targets, but they are starting from a higher level. Germany, Italy and France are starting from ‘teen’ levels and aiming to reach the high twenties or – in the case of Germany – a solid 38.6%.

The transport sector has the lowest targets in each member state. It is also the sector with the most consistency between countries, with most targets hovering around the 10% EU target. 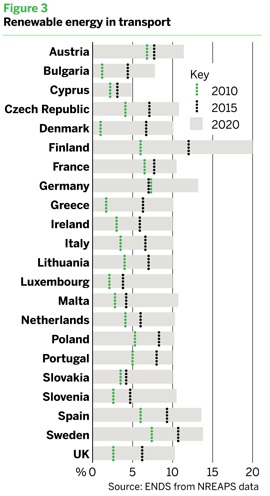 One of the reasons the targets appear less ambitious than in the other sectors may be that this is an area with relatively few policy options. “There are three ways to increase the share of renewables in transport: biofuels, better vehicle efficiency and a move to electric cars,” says PwC’s O’Regan.

Electric vehicles and better vehicle efficiency rely on the private sector for technical innovation, leaving biofuels as the main policy area for government. But the action plans contain few concrete policies for biofuels.

Germany’s plan, for instance, has no new policies for encouraging biofuels use despite falls in subsidies and market share. “The biofuels sector faces the biggest obstacles,” says Claudia Kemfert, head of the energy department at the German Institute of Economic Research. “The reduction of tax breaks has led to a decline in sales, in particular of biodiesel. Although the use of ethanol has increased, assuming a doubling of the use of biofuels is very optimistic.”

The Spanish action plan sets a 18.8% 2020 target from a 2010 level of 7.4%. Beatriz Álvarez, a project manager with APPA Biofuels, says while that target may be in line with other member states, the plan is not making full use of existing law in Spain. “The compliance path has no growth projected in 2010-13 for biodiesel or 2010-16 for bioethanol,” she says.“This is too pessimistic and doesn’t reflect reality. The new regulations due to come into force will raise from 5% to 7% the allowed additive of biodiesel and from 5% to 10% the allowed additive of bioethanol to petrol.”

As for buildings’ energy performance, there are drastically different targets – and several ways of accounting for them. The figures are quite simply all over the place.