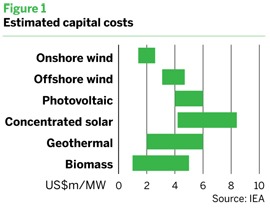 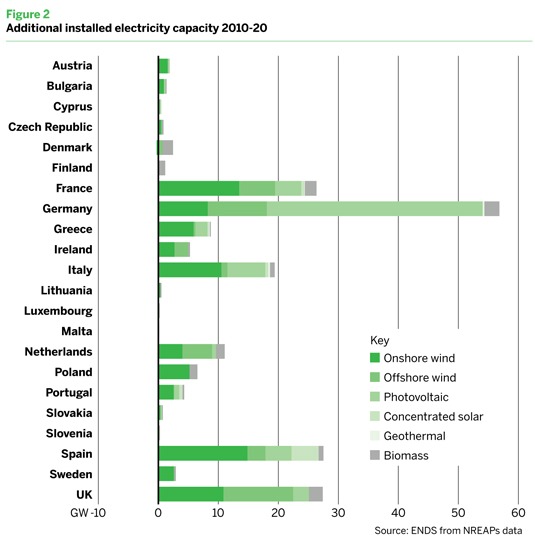 The National Renewable Energy Action Plans (NREAPs) give a detailed picture of how much extra capacity is needed to meet national targets for the electricity, heating and cooling, and transport sectors. But while they display some sound planning and a significant amount of goodwill on the part of member states, the plans are just figures on paper. The challenge will be to deliver the investments needed to build capacity.

Little information on future investments in renewable energy appears in the action plans. Member states were invited to provide data on the costs and benefits of the measures detailed in their plans but few did so. A reason often given is that it is too early to make such predictions.

Some plans are based on calculations and assumptions made by national energy agencies or government departments in earlier reports, but these documents are generally not mentioned. Only the UK plan, which is expected to be revised by the new coalition government, refers to the impact assessment of a 2009 renewable energy strategy.

The information available is sketchy. Some countries give figures. For example, Slovenia predicts that measures in support of renewables will cost about €456m for electricity and €442m for heating and cooling in 2010-20. In July, the Luxembourg energy ministry said implementing its plan would cost about €830m, including €231m for electricity, €178m for heating and cooling, and €143m for biofuels.

Other countries have chosen to focus on their plans’ benefits. Spain predicts jobs in the renewable energy sector to rise from 70,152 in 2010 to 128,373 in 2020. Portugal expects to employ about 100,000 green energy professionals, compared with 400,000 in Germany. Some plans include information on the expected greenhouse gas emission savings and reduced oil and gas imports. Portugal, for example, says it could save up to €2.3bn on imports annually if the plan is fully implemented.

Working out what the extra capacity will cost is a tricky business. There are figures on the cost of each technology but these can vary greatly depending on location. For example, the cost of buying and installing a three-kilowatt photovoltaic (PV) installation is much lower in Germany, at about €9,000, than in France at €15,000.

The figures are also difficult to compare because they often include differing kinds of costs. There are capital costs, also known in the jargon as ‘turn-key prices’, and operation and maintenance costs. Capital cost figures can be misleading because they may not include consultancy fees, the price of equipment such as wind turbines and construction costs.

Using such data to estimate investment needs risks amounting to nothing more than wild guessing. But reliable information on standard costs does exist, in technology roadmaps and sectoral papers called Renewable Energy Essentials produced by the International Energy Agency (IEA).

Even these figures must be taken with a pinch of salt, however. Technology prices drop regularly making the figures date rapidly. PV industry body EPIA’s Gaëtan Masson says his sector is already assuming a cost of €2m per megawatt of installed capacity compared with the IEA’s $4-6m/MW range (€3.14-4.72m/MW). It is safe to assume that current prices are slightly lower than those cited in the most recent IEA literature.

In its RE-thinking 2050 report, renewable energy umbrella body EREC predicts total cumulative investments will be €963bn by 2020, rising to about €1,629bn in 2030. Dörte Fouquet, director of the European Renewable Energies Federation, believes PV investments will be higher than current estimates given this sector’s rapid development. She predicts slightly less investment in biomass than anticipated because of the ongoing debate over its sustainability.

The bulk of renewable energy investments will cover capital costs. Operational and maintenance costs tend to be low. For PV they represent 1-1.5% of an instilation’s initial cost. Investment needs will depend on technology prices and planned extra capacity.

The largest PV investment is set to be in Germany, with planned additional capacity of 35,969MW between 2010 and 2020 and capital costs amounting to €112.9-169.7bn. EPIA estimates investment in Germany to be €72-79bn.
Italy and Spain are also planning massive investment in PV capacity, with €19.8-29.7bn and €13.6-20.5bn respectively. Costs are higher than for other technologies because PV is still relatively expensive.

Spain will be the largest investment hub  for onshore wind power, with €16.3-30.2bn, followed by the UK and Italy. The UK is set to invest the most in offshore wind power with €28.3-42.9bn. Germany and the Netherlands come second and third with €24-36.4bn and €12-18.3bn respectively. Investments in electricity from biomass are much lower compared with other renewable technologies.

Most funding is expected to come from the private sector. Banks will finance the construction of extra capacity, especially for large projects, with investments being paid back through feed-in tariffs and other support schemes. Some funding is also expected to come from the EU’s Strategic Energy Technology plan, which will invest several billions of euros in major renewable energy projects.

Some projects are easier to finance than others. For example, onshore wind power projects are quite straightforward. Western Europe is dominated by small onshore farms with an average capacity of 100MW. The largest project is a 600MW installation in Romania.

Projects of this size can be managed by a small- or medium-sized company, according to Jacopo Moccia of wind power trade association EWEA. “The banks will give out a loan without great difficulty because the economics are straightforward,” he says. Installations in France will get €80/MW hour produced over their 15-20 year lifetimes. It will take 7-12 years to pay off the loan, which means investors will cash in on these projects for about eight years.

Offshore wind projects have more complex funding structures because they are much larger projects based on a technology that is not yet mature. Projects always involve more than one bank, plus utilities and several other participants. Costs are reflected in the feed-in tariffs: €130 per MWh produced in France, which is a mark-up of nearly 50% on the onshore support.

Few EU countries plan a major increase in offshore capacity. But for those that do, such as the UK, raising the funds could be a challenge. Andrew Buglass of the Royal Bank of Scotland, one of the largest investors in renewable energy, told a conference in June that “fear of the unknown” and the complexity of deals were making lenders cagey.

Lack of finance – due to banks’ reluctance to lend following the global financial crisis – remains a problem, especially for the offshore wind sector. Projects led by utilities are less affected because they can fund investments from their own balance sheets.But independent developers are severely constrained, according to EWEA.

However, utilities’ spending power is not unlimited because they are also investing heavily in other areas such as nuclear reactors and grid upgrades. Another key player is the European Investment Bank. The bank’s loans are instrumental in the construction of the one-gigawatt London Array wind farm in the North Sea. A total of £500m (€611m) has been granted so far, a second loan having been agreed in July.

Consultancy PwC recommends several remedies to address the scarcity of pre-construction finance in the UK. These include underwriting risks through new taxes such as a levy on electricity consumers, additional Renewable Obligation Certificates (ROCs) for a limited period, or making offshore investments tax free for the public through individual savings accounts (ISAs).

Investment in the sector could also be opened up to pension funds if risk prospects were lowered, perhaps through a regulated asset scheme with capped liabilities for cost over-runs.

A key condition for attracting investors is to provide a stable regulatory framework. Feed-in tariffs provide stability because they remain valid for 15-20 years depending on projects. But tariffs for new projects are regularly reviewed, with the possibility of significant cuts in the subsidies.

These cuts generally reflect the increasing competitiveness of renewable energy technologies. In July, German environment minister Norbert Röttgen defended cuts in his country following a steep drop in the price of solar panels, leading to “unacceptably high returns” for operators in the sector and much higher prices for consumers. In 2010, solar power incentives will cost German consumers an extra €0.02 per kilowatt hour of electricity.

But feed-in tariff revisions can come across as arbitrary, fuelling uncertainty among prospective investors. Spain’s response to its overly generous regime has been seen as too harsh, with some saying the cuts could damage the entire PV sector for years.

While the European economy is recovering slowly, the use of incentives for PV should remaine measured and proportionate – and follow the price evolution of PV systems – according to EPIA’s Mr Masson.

With grid parity starting to become a reality in some southern European countries, guaranteed support for PV deployment in the coming years is crucial. Without a commitment of this kind, policymakers may be pressured into reducing or stopping incentives altogether.

According to Mr Masson, the Spanish government even tried to revise downwards previously agreed tariffs, which could have seriously undermined the confidence of investors in any environment that is highly reliant on stable regulation.

In the UK, the reform of the renewables obligation in 2009 boosted morale in the offshore sector. Operators will be awarded 1.5 certificates per MWh produced – compared with one for onshore projects – which is more generous than some had anticipated. But there is uncertainty over how the new government will take the support scheme forward. A possible switch to feed-in tariffs is causing concern at a time when investment in new offshore capacity needs to grow significantly.