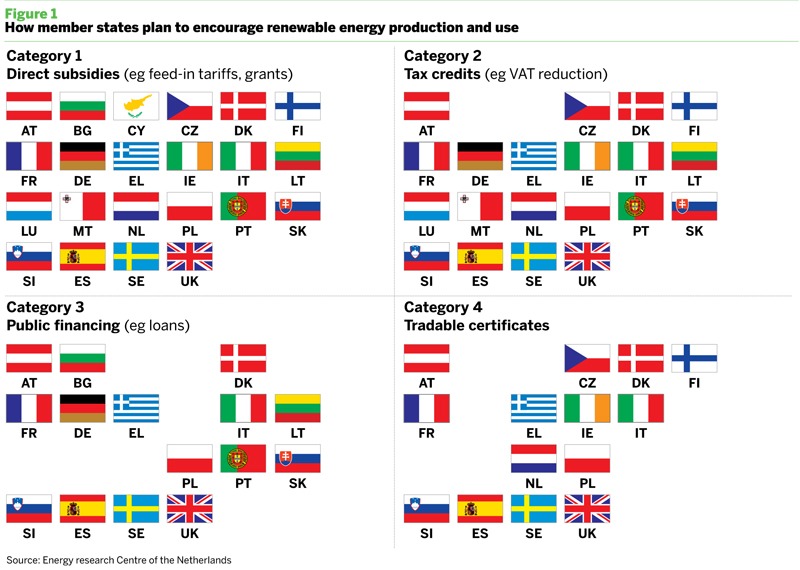 Countries’ action plans differ significantly in terms of the quality and quantity of information they provide. Some extensively outline the policies the governments are planning to introduce to help meet the targets they have set, while others list next to nothing.

In many cases, the lack of detail is the result of a recent change in government. In others, member states have told ENDS that decisions on policies are still being taken. For instance, a representative for the Finnish energy ministry said full details are missing because new support systems are being developed and final decisions on them will not be taken until 2011.

But a pattern is emerging for those countries that have outlined concrete new policies: financial incentives for renewables, such as feed-in tariffs, are a popular choice, though timelines are less clear.

Other more specific policies, such as programmes to encourage take-up of biogas, are thin on the ground. And while some countries have chosen to tackle planning permission problems for onshore wind and solar, others have for the moment left those problems unresolved.

Financial incentives are a particular focus of most policies for which details are presented. Countries that experienced recent fluctuations in their feed-in tariffs for solar energy were particularly keen to indicate some price stability.

Spain, which has caused some market turbulence by lowering its subsidies, says in its plan that it has a policy goal of “creating a stable and predictable price framework for renewables producers by 2011”. But there is no indication of how this might be achieved. Heikki Willstedt from wind sector industry association AEE told ENDS she sees no sign that the creation of a stable and predictable price framework is imminent.

Neighbouring Portugal faced a similar problem when it lowered its feed-in tariffs in 2005. But its action plan contains no mention of a policy goal to create a stable price framework. Antonio Sá da Costa of Portuguese renewable energy association APREN says this is a problem because the government has failed to take into account the impact of the economic crisis coupled with increasing expense and requirements from grid operators.

Lithuania plans to introduce incentives to boost wind power installed capacity to 500 megawatts, solar power installations to 10MW, and bio-cogeneration to more than 162MW in 2014. And in the UK a feed-in tariff structure was introduced for installations under five kilowatts.

Another area of concern that most plans have focused on is how to facilitate access to electricity grids for renewable energy generators. In the Netherlands, it is the only planned measure listed.

The Dutch Priority for Renewables legislative proposal would give priority grid transport to renewables from 2010 onwards. Under the proposal, new entrants will be connected immediately instead of having to wait for sufficient grid transport capacity to become available. But consultancy CE Delft says this proposal would have little to no effect. The measure will give physical priority to renewables but without significant funds allocated to it – in other words, it does not give them economic priority.

By contrast, Lithuania intends to take some extensive measures to ensure access to the grid for renewables. In its action plan, the Lithuanian government says it is preparing draft laws that will oblige transmission and distribution system operators to provide access for renewables producers. It will also force them to upgrade and manage the grid so that its capacity allows renewable energy producers to increase production. A financial support scheme to turn the grid into a smart network in 2011-15 is to be put in place using EU structural funds.

Spain is also planning to roll out smart grids for electricity transport and distribution in 2012-20. Experts have observed that the planned measures are promising, but that gauging their efficacy over the next decade is a tall order. According to Ms Willstedt, the level of investment into research and development needs to be raised.

Beyond electricity grid access, another big problem for renewable energy generators has been obtaining permission to build facilities. Countries have a wide range of proposals for dealing with the problem, with varying degrees of ambition.

Lithuania is planning to pass legislation in 2010 to force local authorities to promote renewable energy sources. Portugal wants to revise its wind generation regulation in 2010-11 to reduce red tape and increase production. It is also planning to create a one-stop shop for licensing new installations – a facility other countries are also considering.

In Ireland, a planning bill currently going through the legislative process would make it easier to build large-scale projects. Another planned change in legislation would make permissions for offshore development closer to land-based planning.

The European country where planning difficulties have got the most attention is the UK, where many blame the ‘not in my backyard’ stance of local planning authorities for the failure of the UK to fully harness its significant onshore wind potential.

The British government has created an infrastructure planning committee to authorise projects over 50kW. But this would still leave small- and medium-sized projects exposed to the vagaries of local councils’ decision-making processes.

“An installation under 5kW will fall under the feed-in tariff scheme, and over 50kW will fall under the Infrastructure Planning Committee,” says Ronan O’Regan, an energy analyst with PricewaterhouseCoopers. “But in between there is a gap with no remedy to solve the planning permission problem, so it will still be difficult to have medium-sized onshore installations.”

The new British government is considering another policy option, which is not mentioned in the plan. “The new government is talking about local communities keeping business rate proceeds for the first six years of a project, which would make it much more likely to receive their approval,” says Gaynor Hartnell, chief executive of the Renewable Energy Association.

Several countries are planning to introduce new measures to encourage the generation of heat from biowaste. In 2014-20, Spain aims to use 5.5 million tonnes per year of agricultural and forestry waste for energy production. It is also earmarking public sector investment for research into energy storage, cost reduction in solar and wind generation, and into developing deep-sea energy generation. In addition, Spain plans to promote the diversion of combustible material from landfill in 2016-20.

In Portugal, the government’s Calor Verde programme will finance installation of biomass heat recovery systems and microgeneration from 2010, with the aim of saving 16,020 tonnes of oil equivalent in 2015 and 25,094toe in 2020.

This would not be making adequate use of Portugal’s potential, according to some. “We believe there should be specific regulatory measures to aid the incorporation of electricity production with biogas,” says Rita Antunes of environmental NGO Quercus. “Portugal could produce an estimated 660 gigawatts per year, which is equivalent to 150MW of installed capacity. The burning of waste is being given priority to the detriment of the more environmentally friendly combustion of biogas.”

According to Ms Antunes a re-evaluation of biomass plants is needed, so they can produce heat as well as power.
In the UK, a biogas feasibility study accompanied by demonstration projects is set to begin by 2011. Its aim would be to support the construction of new composting and anaerobic digestion facilities that process food waste.

Spain is planning incentives for renewable heat in thermal renewable energy installations. Portugal is introducing measures to promote the production, certification and storage of biomass and geothermal pilot projects.

Portugal is also planning to allow biogas to be transported in the gas grid so it can be used for heating and cooling.

In the UK, a renewable heat incentive announced by the previous Labour government was scheduled to go into effect in April 2011, but the new Conservative-Liberal coalition has not yet announced whether it will keep the policy.