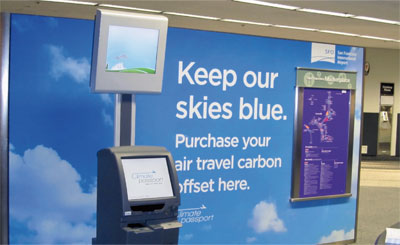 In the brief period before the financial crash when voluntary carbon offsetting became a corporate fashion, it is undeniable that some buyers entered the market without proper preparation.

From about 2006, a first wave of expert guidance emphasised the importance of establishing offsetting as a part of a carbon management hierarchy, starting with measuring emissions, devising a strategy for reductions and finally offsetting. Even with this help, many buyers struggled to swim through the alphabet soup of carbon credit types and standards. Too many thought in simplistic terms that the only aim was to achieve an ill-defined ‘carbon-neutrality’.

And of course criticism mounted not only over offsetters’ motivations but also over the quality of – especially voluntary – carbon offset credits. Amid the furore, quite a few offsetters left the market. Direct consumer purchasing of offsets has certainly withered. Further pressures have come since the financial crash as organisations have had to ask themselves tough questions about how to use limited resources.

Mike Rigby of Copenhagen Carbon Management, a niche offset and carbon management company, believes the pendulum has swung too far: “Some businesses are now using the well-publicised problems surrounding elements of the voluntary market as an excuse to abandon the expense of offsetting or climate action altogether.”

In these frugal times, those still offsetting have had to define the scope and value of the practice ever more carefully, in both financial and carbon terms. The days of ‘offset and forget’, with guaranteed publicity but no scrutiny of reductions, are over. As Jamal Gore, managing director of consultancy and offset provider Carbon Clear, puts it: “People are increasingly sceptical of offset programmes which are not supported by internal carbon reduction.”

But offset they still do, in a variety of ways. An EcoSecurities offsetting trends survey in 2009 found that of the 300 respondents who replied, a third do not intend to offset before 2012, 14% are carbon-neutral, 13% offset their air travel and 11% offset their products. We examine here the different approaches being used and emerging practices.

Traditionally, the natural starting point for carbon management programmes is operations. This reflects scopes one and two of a carbon footprint, as defined by the World Business Council for Sustainable Development and World Resources Institute’s Greenhouse Gas Protocol, covering site energy, electricity, owned transport and “fugitive emissions”. This footprint is consi­dered to be under the “management control” of an organisation, and is the priority for a carbon strategy.

Tetra Pak’s UK division is the only one of its 41 market companies that offsets its emissions in support of a rigorous carbon reduction programme, because “it has the right mix of consumer understanding of environmental issues and retailer interest”, according to a company spokesman. It supports a highly marketable community-based, carbon-cutting agro-forestry project in Uganda, operated under the Plan Vivo standard. The company makes little mention of this offset programme on its website and gives no indication on its packaging.

The company thus represents a growing trend of ‘invisible offsetters’. Camco, a major offset provider, has noticed the movement over the past two years. Yariv Cohen, chief carbon officer, explained the rationale in this way: “Businesses are doing it because they believe it’s the right thing to do, not to make a point of going carbon-neutral.”

Not all carbon offsetting is invisible. In publicly acknowledged offsetting, a second important trend is for businesses to tie offsets directly to products or services rather than offsetting operational emissions.

Toshiba’s Carbon Zero programme is one example. Launched in June 2009, it is designed to draw attention to one of its photocopiers. Steve Hewson, marketing director, explains: “I was looking for a USP [unique selling proposition]. Environment is one of the five foundation stones of our business and we are reducing emissions extensively. Like all marketing initiatives, offsetting was an educated guess. But some customers have already bought photocopiers from us based on the initiative.”

Under the plan, three tonnes of life-cycle CO2 emissions from each machine and a million paper copies are offset by a gold standard (GS) rocket stove scheme in Kenya through project developer CO2Balance.

Mr Hewson named four new FTSE 250 customers whose decision was influenced by Toshiba. Two are also offsetters. His rationale does not stop there: “Carbon Zero offers a transferable benefit to customers, as copy shops can offer zero-carbon photo­copying,” he continued.

The CarbonNeutral Company is perhaps the best-known provider of marketing-led offset services. Its recent branded offset initiatives include CarbonNeutral Bibles on sale in Walmart. But one of its clients has a more strategic objective – to lead the industry. Offsetting is not common in Finland, and Itella, which runs the national post and other mail services, is using it to stimulate interest from other businesses.

Itella’s environment director Hanna Kaustia explained: “We are a national player. People notice us and are interested in what we do. Offsetting brings carbon reduction to life in a way that we couldn’t have done otherwise, making it more concrete and tangible”.

Domestic direct mail and parcel deliveries are offset by Itella, supporting GS projects, and private customers are offered the chance to offset their newspapers, letters and stamps by paying a small supplement. Itella’s influence extends beyond Finland: it is part of the Universal Postal Union, which is considering a combined carbon offset scheme for the postal sector.

EcoSecurities’ most recent annual survey of offsetting provides further evidence of this trend. “Carbon-neutrality and marketing” was cited as a key motivation for offsetting, just behind environmental reasons.

Major firms get in on the act

A third clear trend is for larger buyers especially to get directly involved in pro­jects that create carbon offsets. French food giant Danone is creating its own project to offset irreducible emissions for its Evian bottled water brand by 2011.

Bernard Giraud, its vice president of sustainability and shared value creation, explained why: “We are co-creating projects with local organisations which reflect our corporate positioning and brand, food security, ecosystems and biodiversity. We want to make the carbon economy usable and add value to communities.”

Danone’s first pilot programme is mangrove reforestation in Senegal, where the company has already supported the planting of 34 million trees. It intends to plant almost double that this year. Mobile cinema screenings and workshops are being used to ensure community participation. Mr Giraud estimates that 80,000 people in 330 villages are already involved. The project hopes to achieve accreditation to the Voluntary Carbon Standard.

This ‘self-help’ trend is particularly noticeable for those with agricultural supply chains in the developing world. Coffee retailer Starbucks is taking offsetting further still, and piloting forest conservation incentive programmes that link coffee farmers to carbon markets. Last year, it worked with 29 coffee-growing communities in Sumatra, Indonesia and Chiapas, Mexico, in partnership with Conservation International.

Because many of its growers provide coffee to a range of retailers, Starbucks recognises the importance of protecting the industry as a whole. Mr Hanna continued: “Our aim is to develop a metric so that for every pound of coffee bought, a contribution will go to the coffee producer. We hope, in time, that all coffee retailers will adopt this. We want this to be a game-changer for the industry.”

Despite a decade of attempts by sellers, consumer offset propositions still remain a fringe practice. The success or otherwise of schemes is a closely guarded secret – neither EasyJet nor British Airways were willing to contribute to this report. San Francisco Airport, however, has introduced a different approach to the standard web-based option, and was happy to divulge its results. Its ‘Climate Passport’ initiative involves three specially designed kiosks in different parts of its terminal buildings, with a simple animation to draw people in and a mechanism to offset flights through an interactive touch screen.

Julian Potter, the airport’s government affairs manager, explained that the main objective of the scheme is not to raise money for carbon projects: “Climate change and the purchasing of offsets uses an unfamiliar language,” she said. “Not everyone gets it. The main role of the programme today is education. And ultimately, we want to ensure that offsetting your carbon footprint will be provided as a customer service, just like wi-fi.”

Ms Potter ran through the statistics. Of the 10,000 or so passengers who walked up to the screens in ten months, she said 2,800 clicked through to the “buy” page and 375 completed the purchase (about 3% of those approaching the kiosks). Their contributions have raised over $7,000 for the ­Garcia River forestry project and a city carbon fund, used so far to support a community biofuelling station.

BBC Worldwide, the broadcaster’s commercial arm, is also using the cost of offsetting to both drive home the environmental message and stimulate change. Money raised from a £5 car park charge for staff at its central London headquarters is used to offset the organisation’s carbon footprint.

Whatever the motivation and business driver, what unites all these offsetters is their need for high quality. To bring a programme to life for staff or customers, or benefit those on the ground in the country of origin, projects are carefully selected to provide wider sustainability ends. ‘Vanilla’ credits, which have few distinguishing characteristics or offer carbon-only benefits, are off the menu. As we will discover in the next section, this is set against the backdrop of a strong downward price pressure, creating new approaches from suppliers.

Others choose to gain business value by ‘offsetting’ through direct carbon reduction. Consultancy Capgemini earmarks money that would have been spent on offsetting for internal projects. Google is sourcing renewable electricity to reduce the carbon intensity of its services, as well as offsetting.

Conversely, some of those businesses unlikely to offset already provide ‘green’ services. Nick Coad, sustainability manager at National Express, explained his firm’s position: “We are a carbon offsetter through our activities. Travelling by coach has an 80% lower carbon footprint per passenger kilometre than a car. It would be a confusing picture to customers if we offset our emissions, and it is low on their priority list.”

Whatever the type of offset or wherever its absence, voluntary offsetting programmes are now almost universally recognised as just one approach in the carbon man­agement portfolio. Measurement and reduction will continue to dominate efforts, particularly as most legislation, such as the UK’s Carbon Reduction Commitment Energy Efficiency Scheme, does not recognise offsetting.

The context for offsetting is clearer now as well. In June, the British Standards Institution published PAS2060, a carbon-neutrality specification for businesses that includes measurement and energy efficiency.

Ultimately, what unites many offsetters is a desire to go beyond own-emission reductions and to support communities through carbon-related projects or excite customers and staff about the subject. These buyer trends are testing the sourcing strategy of suppliers, with long lead and limited supply for some credits. It’s the sellers’ perspective we will turn to next.