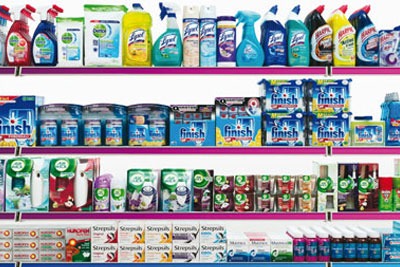 Reckitt Benckiser is already half-way to meeting a 2020 carbon reduction target for its products’ life-cycle emissions, it reported in January.

But the consumer goods giant’s efforts to reduce the carbon footprint of individual products have been counterbalanced by a substantial growth in sales, meaning its total footprint has increased slightly.

In 2007, UK-based Reckitt Benckiser, which owns brands such as Finish, Dettol, Clearasil and Strepsils, pledged to reduce the life-cycle carbon emissions associated with each ‘dose’ of its products by 20% by 2020 (ENDS Report 394, p 10). A dose is the amount of a product required to deliver its intended function on one occasion.

This 20% target was ground-breaking at the time. Few consumer goods firms had released details of their products’ carbon footprints let alone set targets to cut them.

Results for 2009, released in January, show an 11% reduction from 2007 levels to 59.4 grams of carbon dioxide-equivalent per dose.

Reckitt Benckiser said this reduction prevented the emission of three million tonnes of CO2e. But its absolute carbon footprint, including the life-cycle emissions of all its products, grew by 5% after the company experienced business growth of almost 50% in revenue terms over the two years to 2009.

The company calculates that consumer use of its products accounts for 71% of life-cycle emissions. Raw materials sourcing plus packaging add another 22%. Manufacturing processes account for only 1.4%.

Reckitt Benckiser does not give a detailed breakdown of the reductions achieved so far, but the biggest contributions have been from product design improvements, campaigns encouraging consumers to lower the temperature they run dishwashers and washing machines at, and the installation of combined heat and power plants and renewable energy systems in its factories.

There have been doubts about the ability of firms with targets like Reckitt Benckiser’s to accurately measure the effect they have had on consumer behaviour and account for changes brought about by other bodies (ENDS Report 429, p 10).

But Reckitt Benckiser’s vice president of sustainability Edward Butt said the company only included emissions reductions for which it had quantitative evidence using, for example customer usage logs, and the figures were verified by accounting firm Deloitte.

Neither is Reckitt Benckiser claiming it is responsible for all reductions achieved, he said. Many of the variables that affect the average carbon footprint of the firm’s products are beyond its control including the exact mix of products sold and the carbon intensity of the electricity supply in the countries where they are used.

“We’re not saying ‘we did all this’, we’re saying ‘we’ve measured this, it has changed’,” Mr Butts told ENDS.

Compiling the data and trying to understand the factors at play has been time-consuming, but he has no regrets about embarking on the process. “It’s given us a much better understanding… The benefit at the end of the day is in having a company that is ‘fitter’ in terms of climate change.”

Reckitt Benckiser’s life-cycle approach to carbon reduction has since been adopted by several other big-name companies.

Unilever is perhaps the most ambitious. It plans to halve the carbon, water and waste impacts of its products’ life cycles by 2020 (ENDS Report 430, pp 10-11).

Procter & Gamble has produced a long-term sustainability ‘vision’, which includes a wholesale switch to renewable energy, but gives no deadline for meeting its goals

Dettol and Harpic to include consumers in their carbon footprints

Consumer goods giant Reckitt Benckiser has pledged to reduce its carbon footprint by a fifth from current levels by 2020 - including the CO2 emissions associated with the use of its products. Even so, its overall emissions could still rise because its Carbon20 target is for emissions per unit of product.