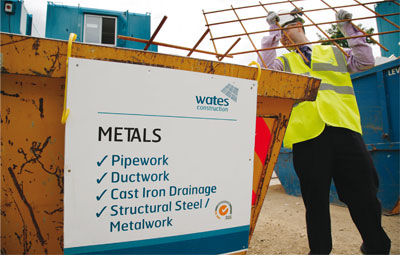 Construction firm Wates just missed its pioneering target to stop sending non-hazardous waste to landfill by the end of 2010.

It has also had significant success in waste minimisation during the period, with waste arisings down from 70,737 tonnes in 2007 to 38,617 tonnes in 2009, in spite of little change in turnover. Figures for 2010 are not yet available.

Wates set its zero landfill target in July 2006, making it the first construction firm to do so (ENDS Report 379, pp 30-33). It has since been widely praised for raising the bar, especially when the construction industry as a whole only has a target to halve the waste it landfills by 2012 (see pp 27-33).

The firm is one of the UK’s largest private construction firms with 2,200 staff.

“We’re proud of what we’ve done, because we have come a long way even if we did miss the target,” said Jon Tivey, the group’s environmental manager.

“We can’t say one factor helped us achieve this,” said Rachel Woolliscroft, head of sustainability. “But key... has been changing behaviour and the way our people perceive waste on-site. If you don’t do that it’s very difficult to create change.”

The firm has run a waste management training programme for all staff since 2006 to raise awareness and share best practice, and collects monthly waste reports for all sites so it can monitor performance. An awards scheme has also engaged staff.

According to Ms Woolliscroft, another factor has been the firm’s efforts with clients and suppliers to design out waste before construction starts. An example is the firm’s work with British Gypsum on Luton’s  £200m Schools for the Future project. Wates seconded a British Gypsum em­ployee into their design team so opportunities to design out waste could be identified and correctly-sized plasterboard supplied.

This has led to an 11% cut in waste on site compared to what would have been expected from the project.

Wates also now does audits before refitting retail stores or refurbishing offices to identify materials suitable for reuse. This has seen it work well with local social enterprises.

However, Mr Tivey says another main reason for its improvement has been rationalising the number of waste contractors the firm uses. “We used to have an approach when sites picked their own. We had about 130 and it was really difficult to look at what was being achieved and we didn’t have any clout with them to drive improvement.”

The firm now has 30 preferred contractors, split regionally and signed up to five-year contracts. These include Powerday in London, LSS in Yorkshire and Weir Waste in Birmingham. These firms sort and separate mixed waste into its constituent parts for recycling or use as fuel. One reasons for choosing these companies is their willingness to invest to improve recycling.

“There is a tendency to rely on a very good waste contractor [at some sites],” Mr Tivey added. “You think: ‘They can accept mixed waste and so we don’t have to do anything on site.’” This is mainly an issue in city locations where there is no room for multiple skips to sort out materials, he said.

Wates says there are difficult waste streams preventing it from achieving 100% diversion from landfill. This includes kitchen and bathroom waste from upgrading council houses. It has run projects to treat this waste, including a contractor using it to run a combined heat and power plant.

Wates’ achievement appears more impressive when compared with some firms. For example, Berkeley Group aimed to halve the waste it landfills by 2010 compared with 2007/08. Its corporate sustainability report says it met this target, but the reduction is only 19% if waste landfilled after being sent to sorting facilities is counted.