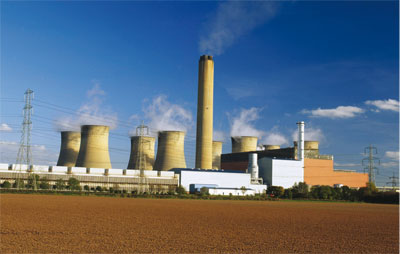 The Environment Agency appears to have set lax conditions on pollutant emissions from coal-fired power stations, data from 2009 on the UK pollutant release and transfer (PRTR) website suggest (see p 22).1

The figures suggest the sector may not have cut emissions by as much as it could have done.

The PRTR website shows great variations between emissions of coarse particulates (PM10), nitrogen oxides (NOx), sulphur dioxide (SO2) and other pollutants from each power station. But much of this can be explained by considerable differences in running time and generating capacity.

These factors can be removed by comparing the mass of pollutants released with the number of terawatt hours of power produced by each plant every year. But this information is not freely available, as it is considered commercially confidential.

Instead, the amount of CO2 released, recorded by the PRTR, can be a proxy for electricity generated. Energy efficiency does not vary enough to seriously disrupt the link between power and CO2 output.

But even after this is done, major discrepancies remain. For example, for each tonne of CO2 released by Eon’s two-gigawatt Ratcliffe-on-Soar plant near Nottingham, RWE’s similarly-sized Didcot A released 23 times more PM10.

In contrast, the performance of Drax, the largest power station in the UK and one of the largest in Europe, comes out rather well. For each tonne of CO2 released, the plant had significantly below-average emissions of SO2, NOx, PM10, arsenic, chloride, fluoride, carbon monoxide and mercury.

This is partly due to its relative efficiency and modernity compared to most other plants, combined with full flue-gas desulphurisation and its co-firing with biomass (ENDS Report 409, pp 30-33).

But these technical factors, combined with partial oil-firing by some plants, can still thwart fair like-for-like comparisons. Boiler design and the type of coal used are critical.

These differences are reflected in the sector’s regulation under the EU integrated pollution prevention and control (IPPC) and the large combustion plant (LCP) directives. But it is questionable whether the twin regimes have been properly applied by the agency, allowing higher emissions than might otherwise be expected.

To arrive at a subset of power stations that are truly comparable, their status under the LCPD must be taken into account.

Some plants opted out of meeting the concentration-based emission limits values (ELVs) set by the directive for NOx, PM10 and SO2 (ENDS Report 374, p 38). These generally outmoded, less efficient and relatively dirty plants will close by the end of 2015.

Drax, Eggborough, Peterhead and Longannet opted to operate under a cap-and-trade system for the three pollutants, known as the national emissions reduction plan. But as allowances are far higher than emissions, it has turned out to deliver little incentive for reductions (ENDS Report 424, p 24).

Operators of the remaining nine opted to meet the ELVs in return for being allowed unlimited running hours. Of these, four have similar boiler technology, allowing their emissions to be compared: EDF’s 2GW Cottam (pictured) and West Burton plants, Ratcliffe and the 1GW Rugeley, co-owned by International Power and Mitsui. 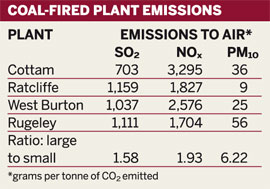 The four power stations share common limits on their pollutant emissions, identical to the maximum emissions allowed under the LCP directive.

However, the IPPC regime also applies to the sector, requiring use of best available techniques (BAT) to control emissions. These are set out in official guidance papers known as BAT reference documents or BREFs.

The BREF for large combustion plants demonstrates that much lower emissions can be achieved than the LCP directive designates, even in older and outmoded power stations.

The Environment Agency says there are site-specific factors that justify the differences between the four plants’ performances and derogations from what would normally be considered BAT.

But the PRTR data, particularly the huge variation in PM10 emissions, suggest that if common limits for the four plants can be justified, they have not been set strictly enough. The policy has allowed continued emissions that might have been cut significantly.

Far more stringent limits on emissions set by other EU regulators also question the agency’s approach. And this is reinforced by the agency’s failure to require plants to fit selective catalytic reduction equipment to control emissions of nitrogen oxides (NOx), due to its expense (ENDS Report 363, p 46). The technology is widely used in Germany, Austria, Italy and the Netherlands.

Friends of the Earth acid rain campaigner Lesley James commented: “We’re familiar with the rationale behind the IPPC permit limits for the power sector, but this data seems to undermine it.”

But David Porter, chief executive of the Association of Electricity Producers, said the agency’s regulatory framework “takes account of all relevant legislation and guidance”.

“It aims to deliver regulatory certainty, which encourages industry investment and hence helps to maintain the security of electricity supply, and it drives substantial reductions in emissions to air,” he added.

Dr Martin Bigg, the agency’s head of industry regulation, said: “Controls are primarily placed on the concentration of the emitted substances because it is the concentration that generally determines the impact on both the environment and on human health. We also take account of mass emissions when setting limits and targeting action… because we recognise [these] are influenced by fuel properties, plant load and technology.”

He added: “We’ll study ENDS’ analysis but would expect similar plants with similar fuel and operations to release similar emissions.”

Drax: climbing out of the carbon coal hole

Many coal-fired power station operators are contemplating carbon capture and storage. But the UK’s largest plant is focusing on a switch to biomass to cut carbon emissions. Alex Marshall reports

Agency eases off on NOx in IPPC combustion guidance

The Environment Agency has issued draft guidance setting out how it will apply integrated pollution prevention and control (IPPC) to power stations and other combustion plant.<SUP>1</SUP> Controversially, it maintains that selective catalytic reduction (SCR) is not the "best available technique" for NO<SUB>x</SUB> abatement.