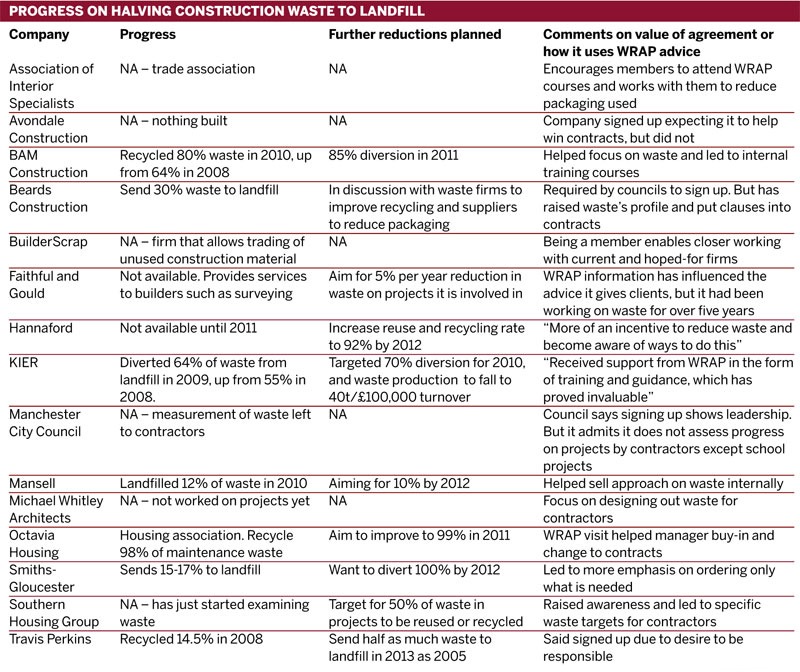 One of the largest voluntary agreement by number involves the construction industry: more than 500 firms have signed up to halve the amount of waste the sector landfills by 2012.

Signatories range from giants such as Bovis Lend Lease and housebuilder Barratt to public bodies like the Olympic Delivery Authority.

The agreement was launched in November 2008, with an initial 17 signatories (ENDS Report 406, p 22), but the target was developed in 2006 by the Strategic Forum for Construction, an umbrella body for trade associations. WRAP’s staff focus on getting clients and principal contractors to put waste reduction and recycling clauses in contracts. They say this should affect the whole supply chain.

In December, it claimed that more than £30bn worth of contracts – over half of the total market – could contain such clauses each year.

But it is impossible to gauge the agreement’s success because there is little data. The baseline – the amount of waste landfilled in 2008 – was only published in March 2010.2

WRAP has yet to provide an update and does not expect to see results until 2012.

It is also difficult to assess the agreement’s impact because most large firms had their own targets before the agreement was signed.

Wates, for example, aimed to stop landfilling non-hazardous waste entirely by 2010. It ended up missing the target by 5% (see p 16).

ENDS surveyed 15 signatories on their progress. Responses suggest the agreement has spurred many to act (see table). For example, Lewis Lowe of Octavia Housing, a north-west London housing association, said a WRAP presentation to senior staff “brought waste to the forefront of everyone’s mind, when it’d previously only been in mine”.

But signing appears to have had little effect on others. Several said they signed to show leadership but provided few details about what they had done since, or said they were trying to reduce waste before joining the agreement.

Opinions were more divided when ENDS spoke to some respondents. One said, anonymously, the agreement “lacked gravity” and had done nothing to draw in SMEs or middle-sized firms “who see it as another bloody hassle”.

“It needs more teeth. I spent the best part of three hours to go to one of their meetings, got told a lot of things I already knew, then went to the pub.”

Peter Jukes, operations manager at Gloucester-based demolition and waste firm Smiths said he felt WRAP should have developed an accreditation scheme for waste firms instead to show they were achieving high recycling rates. This would be better for small firms.

Similarly, Mr Lowe of Octavia said a rise in tax for inert waste could also have been used. But Rachel Woolliscroft, Wates’ sustainability manager, disagrees. “You’ve got to engage people on a common agenda. Landfill taxes would just be paid.”

Mike Watson, WRAP’s head of construction, said the agreement is not targeted at small builders, but “large organisations where they could have the biggest impact”.