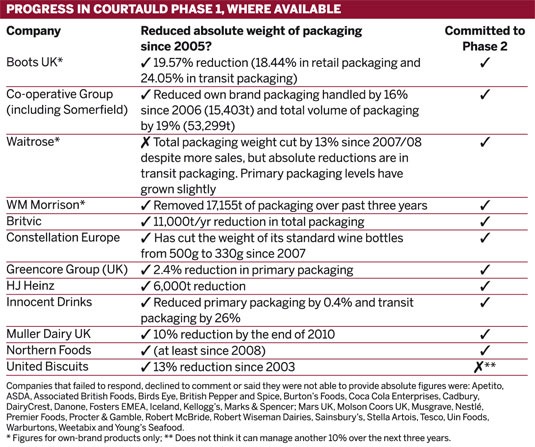 The 2005 Courtauld Commitment had gathered 42 signatories by the time its first phase ended in March 2010. Its ten retail participants represented 92% of the UK’s grocery market. A second phase, from 2010 to 2012, has 47 signatories.

The main aim of the first phase was to reduce grocery packaging with extra goals on food waste. Phase 1 targets were weight-based but this is not the best measure of sustainability because it does not encourage recycled or recyclable packaging. Phase 2’s primary target is to reduce the carbon impact of packaging by 10%.

“It got off to a bit of a shaky start but has improved a lot now we’re into Courtauld 2 and the focus is on overall product sustainability,” says Andrew Jenkins, sustainable development manager at Boots. “It’s now clearer that it’s a collective responsibility. To begin with there was confusion over whether these were individual targets or national. It didn’t help with buy-in.”

The first phase 1 target, to halt packaging waste growth, was met in 2008. But a second, linked target to reduce total packaging levels by 2010 proved tougher. A 4% reduction in the packaging weight of the average item sold was offset by an increase in sales (ENDS Report 428, p 7).

Sales of beer, wine and cider also shot up 21%, which had a disproportionate impact on the results because they are usually packaged in glass.

But the extent to which these cuts can be attributed to the signatories is debatable. Other campaigns and the introduction of council food waste collections which also raise awareness among householders could also be responsible.

ENDS found the few signatories willing to give detailed responses to the survey mostly claimed large reductions in their total tonnage of packaging. This means the absolute weight of some non-respondents’ must have risen.

Andrew Kuyk at the Food and Drink Federation says some early movers were worried the switch to a carbon metric, and hence to new baseline data, meant their previous efforts would be ignored.

Nonetheless, most phase 1 signatories have signed up again plus some large firms absent from the first phase such as Unilever and Heineken. Big names still absent include PepsiCo, General Mills and Diageo.

ENDS’ survey found some confusion over Courtauld’s metrics. The wording does not make it clear whether retailers should include transport packaging and products sold under other brand names and signatories provided a variety of measures. WRAP has since confirmed that only primary product packaging is included in the target.

The figures are not audited by WRAP, but are based on those reported by companies under the packaging regulations. There have been previous doubts about the quality of some of the data used for WRAP’s claims (ENDS Report 403, p 22).

It also seems that some signatories already had their own programmes to cut packaging waste.

But Boots’ Mr Jenkins is certain of Courtauld’s benefit. The chemists’ chain was already taking steps in this area but the commitment has justified an extension of its existing target, he says.

And sharing the firm’s experiences with others is part of its wider sustainability duty. “There’s a corporate social responsibility club of larger companies but there are thousands of smaller firms out there that would like to get involved but don’t have resources to do so,” he says.

Acting collaboratively is also sending a stronger signal to plastics reprocessors on the need for recycled material, he adds.

Nonetheless, Mr Jenkins does think extra incentives might be needed to persuade non-signatories to join and share the burden of the targets.