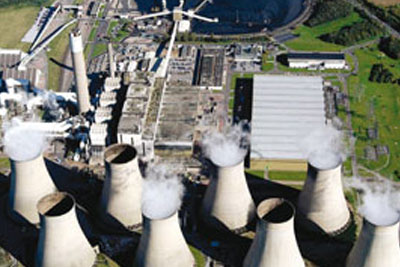 Direct action climate campaigners have emerged with at least a moral victory from the latest round of conflict with UK fossil fuel interests.

A group of 20 campaigners were handed exceptionally lenient sentences on 5 January, despite being found guilty in December of conspiring to shut down a power station.

In sentencing them, judge Jonathan Teare said they had “acted with the highest possible motives”. His virtual exoneration of them will worry energy and other companies that fear they might be the target of environmental direct action campaigns.

During a three-week trial at Nottingham crown court, the 20 pleaded not guilty to conspiring to commit aggravated trespass.

The 20 admitted their intention to close down Eon’s 2,000-megawatt coal-fired power plant at Ratcliffe-on-Soar, Nottinghamshire, for one week during April 2009. The plant is one of England’s largest power stations, emitting up to 150,000 tonnes of carbon dioxide per week.

But they argued they were acting out of necessity, citing a lack of an effective response from politicians and companies in tackling climate change.

They were among a large group who had gathered at a nearby school. But police made a pre-emptive strike and arrested 114 people.

Most of these were not charged or had charges against them dropped, but 26 faced trial. Of the first 20, the court heard that one team of campaigners planned to press the stop buttons on the plant’s coal conveyors. Another intended to climb inside the chimney and abseil down the flue, preventing the plant’s operation for a week.

Among the expert witnesses called by the defendants was US climate scientist, Professor James Hansen. He said their planned actions could have aided the fight against species extinction.

They were also backed by Ian Roberts, professor of epidemiology at the London School of Hygiene and Tropical Medicine. He cited a World Health Organization report which attributed at least 150,000 human deaths in 2000 to man-made climate change.

In his concluding remarks, Judge Teare noted that the contribution of coal to climate change was never in any doubt in the court. He added: “It is certainly unique when neither the judge nor jury need question the veracity and motivation of any defendant.”

The 20 potentially faced up to three months in prison, but Judge Teare handed most of them conditional discharges. Five were ordered to do community service and two to pay some of the costs incurred.

The legal strategy employed by the 20 was one of ‘lawful excuse’. It was successfully used by Greenpeace campaigners in September 2008, when they were acquitted of criminal damage charges, after scaling a chimney at Eon’s Kingsnorth power station.

But it was also a strategy used unsuccessfully by 27 protesters in 2009. They were convicted in July 2009 of hijacking a train carrying coal to the Drax power station (ENDS Report 414, p 64).

In a pre-trial hearing, the judge ruled that nobody was in immediate danger from the plant’s operations, preventing evidence from climate change experts being heard.

The trial of a further six Ratcliffe-on-Soar campaigners, also charged with conspiring to commit aggravated trespass, was due to start on 10 January.

But the Crown Prosecution Service (CPS) said “previously unavailable information” had come to light on 5 January that had “significantly undermined the prosecution’s case”.

On reviewing it, the CPS decided there was insufficient evidence to offer a realistic prospect of conviction. At a hearing on 10 January, it offered no evidence and the case was discontinued.

Immediately beforehand, BBC 2’s Newsnight and The Guardian disclosed that an undercover policeman had infiltrated climate protesters seven years earlier and had played a prominent role in many actions including the planned invasion of Ratcliffe-on-Soar.