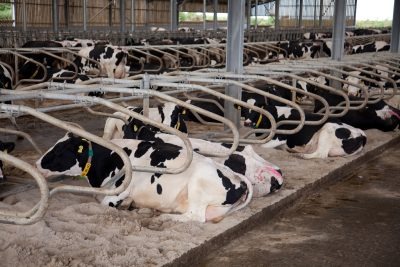 Objections by the Environment Agency have forced the withdrawal of plans to build the UK’s largest dairy farm. The regulator is concerned that the thousands of cows intended to be housed on the site would pose an unacceptable risk to public water supplies.

Nocton Dairies, owned by two farmers from Lancashire and Devon, announced plans to build an 8,100-head farm just south of Lincoln a year ago. This was rejected by North Kesteven District council, following opposition from the agency, local residents and animal welfare groups.

The agency is a statutory consultee for major agricultural developments, which are subject to the environmental impact assessment regime.

The firm responded with a reapplication for a smaller, 3,770-cow facility. It wanted to demonstrate that it could meet animal welfare and environmental standards before increasing headcount, spending £4m on re-engineering its waste management plans in the process.

The cows would be housed predominantly indoors in ten buildings covering 22 hectares, with manure handled by a two-megawatt anaerobic digester. More than 80,000m3 of digestate would be spread across 2,460 hectares of neighbouring agricultural land each year. The cows would be fed on locally-produced forage, and some agricultural by-products such as spent brewers’ grains and sugar beet pulp.

This kind of large, industrialised dairy farm, unknown in the UK, is increasingly common the United States.

The agency was concerned about the site’s location, lying immediately over a highly fractured limestone drinking water aquifer, and so particularly vulnerable to pollution.

Pollution incidents in the dairy sector are particularly common, running at almost one a day. The consequences of a major incident on the farm itself, or long-term significant diffusion from landspreading could be serious: the local borehole supplies 170,000 people with drinking water.

It already significantly exceeds the drinking water standard for nitrate, forcing Anglian Water to mix it with supplies from further afield.

In a statement, Nocton said that the agency’s precautionary stance reflected “unfamiliarity with agriculture in general and the design of the modern dairy farm in particular". It is now considering its options, which could include building the farm elsewhere. Related planning applications for a pipeline and reservoir remain active.

After Nocton withdrew its application, the local council stated that its planning officers would have recommended its refusal.

Their reasons included the agency’s concerns, the possible impact to conservation areas through increased ammonia and nitrogen deposition, and a failure to properly consider alternative, less vulnerable locations. There were also “significant uncertainties” over odour from the site and from landspreading, and insufficient detail over noise.

But given adequate waste management and a suitable location, a large, industrialised dairy farm like Nocton has some environmental advantages. Digestate application would improve soil fertility without using artificial fertilisers and carbon emissions from feed and milk transport would be reduced. It would also help cut the 1.5 billion litres of dairy products the UK imports each year.