Seasonal water tariffs, which charge households a higher rate in summer, appear to cause a "step change" in water use beyond the effects of metering, according to Wessex Water.

But they suffer from a perception problem because customers feel water companies are profiteering, the company says. Tariffs that reward homes for cutting use during the summer may be a better approach. 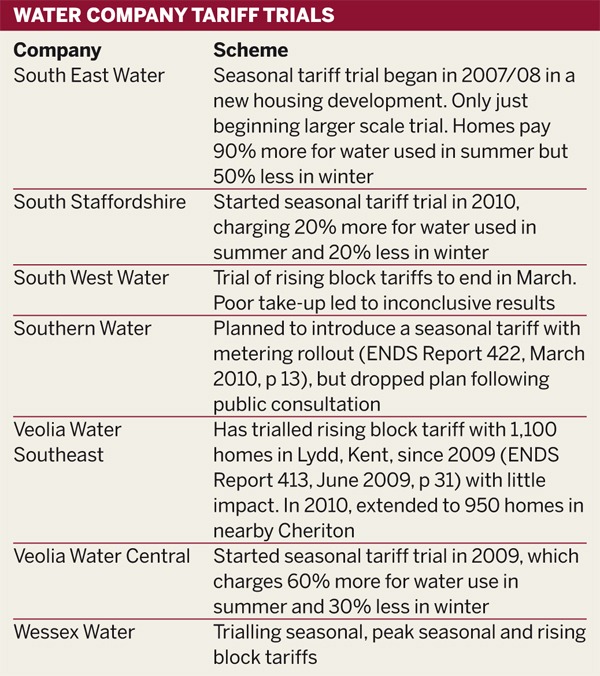 Wessex is one of six firms trialling tariffs aimed at cutting water use (see table). Its three-year trial, due to end in 2012, is by far the largest and most wide ranging.

It has fitted 6,000 homes with meters, and 4,800 of them have been moved onto one of four new tariffs: a standard metered tariff; a rising block tariff that charges customers 20% more once they go above a yearly allowance of 60 cubic metres; a seasonal tariff, which charges 20% more in summer (April to October); and a peak seasonal tariff, which charges 90% more in summer once households go above a set allowance.

Wessex has shown ENDS the results of the trial so far. It hopes these will influence the government's forthcoming water white paper (ENDS Report, September 2010).

Metering on the standard tariff has reduced use by 17%, it says, which is a much larger reduction than the 10-15% normally achieved. Wessex had expected to see a 7% drop, but it believes the higher rate may be due to the relative increase in water bills since previous research was undertaken.

Some of the tariffs have led to further reductions, it adds. The rising block tariff has led to a 5.8% cut, while the seasonal tariff has reduced use by 6.3%. The results are seen as especially positive given the trial has yet to cover a dry summer.

Phil Wickens, Wessex's regulatory finance and tariffs manager, stresses these are interim findings and may change. Use could rebound once the initial shock of a new tariff fades. But the company still feels the results are interesting enough to merit further work.

This is likely to be in the form of more seasonal tariff trials, rather than rising block. Those have had a disproportionate impact on poorer households' water bills. Low-income homes on the seasonal tariff have bills "almost equivalent" to unmetered homes.

The one main problem with the seasonal tariff has been public perception. "It's made some people feel they’re being punished for something that is uncontrollable," said Mr Wickens. "We've had comments like, 'I have to wash my kids in the summer, but you have decided I should be charged more for it.'"

The company says a reward-based tariff could overcome this. "Rather than charging homes more in summer, you’d give discounts if people cut use. You’d achieve the same benefits, but you’d be framing the tariff slightly differently."

This could also take the form of payments to communities that collectively achieve a cut, he said. This may be better for areas that are already low water users. Similar incentives have been trialled by electricity companies.

But the success of Wessex's trial has not been replicated by some of the other companies' trials. In March, South West Water said it was not going to continue its trial of a rising block tariff beyond the end of the month. "In common with other companies trialling similar tariffs, results have been inconclusive with little evidence of significant changes in customer behaviour," it said in a statement.

However, the firm would not release the results of the trial or reveal how many homes took part. In February, a report from the Joseph Rowntree Foundation discussed the trial and said the firm had struggled to recruit participants. There was a risk it would produce no usable data, it added.

South West's trial was voluntary, whereas Wessex required people who moved house to join it.

Veolia Water Southeast also failed to see a significant cut in use among households that took part in a rising block trial, according to results issued last year. However, this could be due to demographics because the households were already low users. It has now extended the trial to another area.

• Wessex Water has also issued proposals for reform of the water industry, aiming to influence the government's current review.

It calls for a risk-based approach to environmental and drinking water standards. "The insistence on stringent absolute quality standards results in heavy investment. This is often disproportionate to... risk," it says.

The government should set clear rules on charging to protect low-income customers. Once these have been established it should require metering of all properties on change of ownership.

Wessex has temporary powers to install meters in this way under its tariff trial. It applied to Ofwat to meter every home on change of ownership during the last price review, but was turned down.