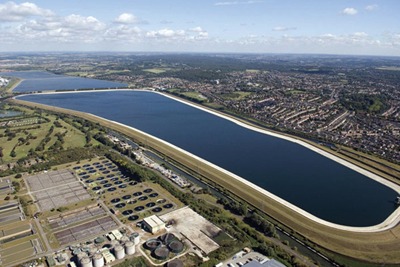 Thames Water could have to develop the UK’s second major sewage reuse scheme after being told by the environment department (DEFRA) that it does not need to build a major reservoir at Abingdon, Oxfordshire.

The letter says Thames’ proposal to build the controversial 100 million cubic metre reservoir, planned to be 2.3 miles across at its widest point, would not be efficient or economical.

It must now work with the Environment Agency to draw up a different solution to meet future demand, which will be much lower than had been claimed by Thames. The company must also produce a revised plan in six months

The new plan could still include a reservoir at Abingdon, but only half the volume of that originally proposed, according to the planning inspector’s report on the inquiry.2 But Thames should also consider a range of smaller options including a sewage effluent reuse scheme at its Deephams sewage works, north-east London.

Thames first announced plans for the huge pumped storage reservoir in 1990. It said the scheme was needed to meet projected supply shortages in the Swindon and Oxfordshire areas, and to regulate flows and boost London supplies (ENDS Reports 346, pp 13-14 and 380, pp 26-29).

Thames has maintained this line in spite of its high leakage rates and low metering levels. The initial draft of its water resources plan predicted metering rates of just 39% in 2030. It is now saying metering will hit 80% by then.

First, that the agency will cut the amount of water Thames is allowed to abstract from the Thames and Lee rivers. Reductions would occur to ensure the rivers meet the environmental requirements of the EU Water Framework Directive. Second, there is a risk the water company may have to provide “major bulk supplies” to other firms.

Thames planned to provide 100 megalitres per day above demand forecasts to deal with these issues using the Abingdon reservoir.

But DEFRA questioned this assessment in its initial response to the plan (ENDS Report 415, pp 41-42), and the planning inspector came to a similar view.

The inspector’s report points out that the agency has yet to ascertain what reductions will be needed as a result of the Water Framework Directive, if any, and that Thames has no obligation to supply other firms with water. Furthermore, the water resource management plan is subject to annual review and revision every five years, so the agency’s work can be taken into account in future plans.

The inspector, Wendy Burden, suggests Thames picked the figure of 100Ml/d simply to justify the reservoir. “[I have] some sympathy with concerns expressed at the inquiry that the [plan] has been produced in order to support the project.”

And Thames did not properly assess alternatives to the reservoir. “Potentially feasible options... have either not been considered or have been rejected before sufficient evidence has been gathered to justify their exclusion,” she said.

If Abingdon is removed from the plan, Thames is projected to have a shortfall in the water it needs to supply from 2025/26. The shortfall will hit 58Ml/d in London in 2035 and 1Ml/d in Oxfordshire. The inspector says the options Thames should consider to meet this include: transfers from the river Severn, a 50 million m3 reservoir at Abingdon and large sewage effluent reuse schemes.

It must also take account of potential future reductions in the amount of water it supplies to Essex and Suffolk Water and Veolia Water Central.

Thames says there is potential for a plant of up to 95Ml/d at the site. This would produce drinking water equivalent to 3% of Thames’ current total supply.

Effluent reuse is controversial because the public could perceive this as using their own sewage for drinking water. The process involves putting large volumes of highly processed, clean water emerging from sewage works into the public supply.

However, given that several major UK rivers have reservoir intakes downstream of sewage works, this already happens. But when a substantial proportion of the water going into a public supply is sewage effluent, and when intake points are only a short distance downstream of effluent outfalls, public acceptability becomes a serious issue.

Only one such scheme runs in the UK. Since 2003, Essex and Suffolk Water has been intercepting 40Ml/d of Chelmsford’s effluent which used to flow into the Blackwater estuary from Anglian Water’s Chelmsford works. The effluent is subjected to extra treatment and then pumped upstream to a discharge point in the river Chelmer (ENDS Report 350, pp 25-27).

The water is then abstracted four kilometres downstream and is pumped to Hanningfield reservoir. There is 72 hours between treatment and reuse. In dry weather, the treated effluent makes up a maximum 30% of the river’s flow.

“But there’s no way we’d use it neat,” said Yvette Degaris, Thames’ head of environmental regulation. “The whole point of putting it into the reservoir is there’d be some mixing [with other water supplies].

“A lot of what we need to do in terms of research is to find out the degree of mixing that needs to be done for it to be acceptable [to consumers].”

Thames’ draft water resources plan said a 95Ml/d plant could be built at Deephams by 2019/20 at a cost of £154m. However, it is not clear that the agency would give the project the go-ahead because of the loss of flow downstream.

The agency is also not sure that reverse osmosis is needed and thinks that a less energy- intensive form of treatment could be used. But Ms Degaris says it would be needed as Deephams receives sewage from over 170 businesses and eight hospitals.

Many water companies in the water-stressed south and east have proposed compulsory metering in their draft water resource plans. Other common themes are new resource developments including reservoirs and a renewed focus on reducing leakage.

The UK's largest water company claims a "strong track record of regulatory outperformance and service excellence". But a resources crisis brought on by its persistent failure to meet leakage targets in London has dented its reputation. Philip Lightowlers reports

Essex &amp; Suffolk Water is at the sharp end of the water resources debate, supplying a large and rapidly expanding population in the driest corner of England. The company has an impressive programme of water metering, leak detection, effluent reuse and work to improve building standards - but it is nonetheless relying on new reservoir capacity to cope with the demand pressures.