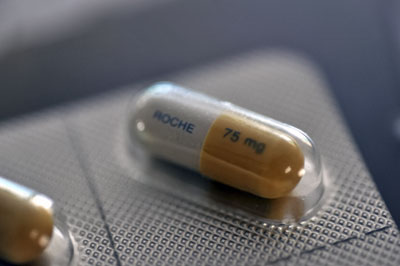 Sewage treatment plants could stop working properly during a severe flu pandemic, according to researchers at the Centre for Ecology and Hydrology (CEH). Drugs in wastewater could build up to levels harmful to bacteria in the works, they say.

Prescription drugs in the water system have been a concern for years (ENDS Report 365, pp 29-32).

There are well-publicised effects of oestrogens in sewage effluent from the contraceptive pill, which can feminise male fish (ENDS Report 276, pp 17-20).

But the potential for other risks from drugs in sewage or drinking water is not clearly understood and monitoring data on levels in the environment are sparse.

The now abolished Royal Commission on Environmental Pollution (RCEP) had planned to look at pharmaceuticals in the environment in a future report. A 2010 scoping study for RCEP, seen by ENDS, set out the case for the investigation.

Demographic change during the next century will lead to an older UK population, it said. As a result, prescriptions are expected to double by mid-century compared with current levels. Prescribing rates have already doubled over the past 30 years.

One-off events such as the 2009 flu pandemic can lead to temporary spikes in prescriptions of antiviral and antibiotic drugs. Andrew Singer at CEH and colleagues investigated the effect this might have on sewage treatment works.

The team modelled the levels of drugs expected to reach the Thames catchment after being excreted to wastewater, during pandemics of varying severity.1 Up to 0.8 micrograms per litre of antibiotics were projected in a moderate pandemic and up to 80µg/l in a severe pandemic.

Either scenario could mean more than 80% of treatment works in the region reaching the level where microbial growth is slowed, affecting effluent and river quality.

Dr Singer then used a bench-scale reactor to investigate the effect of antibiotic and antiviral dosing on the bacteria which process wastewater.2 At the highest dosing levels there was evidence of reduced performance.

Overall, the results are reassuring. “Until we get to a pandemic that is moderate or severe, sewage treatment works will probably be OK,” said Dr Singer. Despite the attention it generated, the 2009 flu pandemic was mild.

But closing RCEP before it could report on drugs in the environment is a missed opportunity, said Dr Singer. “We’re never going to have less pharmaceuticals in our sewage than we have now.”

Professor Sumpter’s results suggest low levels could cause harm. But levels in the environment are not known and would need to be measured before deciding if these drugs are a threat to wild fish.

“My gut feeling is that in most cases, low drug concentrations in water will be of no consequence whatsoever,” Professor Sumpter said. “But there just might be one or two surprises.” He gave the example of diclofenac, a veterinary drug which has killed off almost all vultures in India after exposure via cow carcasses.

A four-year water industry demonstration programme on oestrogens in sewage reported in 2010 that advanced treatment can reduce levels of oestrogens in effluent. But it concluded that these processes are expensive and unnecessary because efficient treatment works already perform the task well (ENDS Report 426, pp 23-24).

A 2008 desk study for the Drinking Water Inspectorate concluded pharmaceutical residues in drinking water did not pose a significant risk to human health, despite a lack of actual measurements (ENDS Report 396, pp 14-15).

There are a number of ongoing studies which should shed more light on the issue. Work funded by the environment department (DEFRA) is monitoring 14 drugs in source and final waters at a number of English water treatment works.

The project is being carried out by CEH and DEFRA’s Food and Environment Research Agency (FERA). It is due to report findings in the next few months.

UK Water Industry Research (UKWIR) is coordinating a major £34m project with water companies and the Environment Agency to look at the extent, source and fate of 45 chemicals including pharmaceuticals at over 150 sewage works around the country.

The ten water firms received allowances for the project in the 2009 periodic review of pricing and investment (ENDS Report 419, p 23). “It is a massive undertaking which will involve two-thirds of a million chemical analyses,” said Brian Ellor, who is managing the project for UKWIR.

The Chemical Investigations Programme will test the removal efficiency of a smaller number of representative existing treatment works as well as advanced treatment processes such as ozonation or activated carbon. It started last year and will finish in 2013.

The programme has been designed with the EU Water Framework Directive in mind. It will try to measure the risk of exceeding environmental quality standards for priority substances under the directive, and what the best approach would be in cases where the standard is likely to be breached.

Options could include advanced treatment where these are technically feasible and available at proportionate cost, or controls at source, said Mr Ellor.

At present human pharmaceuticals are tested for their environmental impact but this cannot be a basis for their rejection by the European Medicines Agency.

Extra treatment not needed for oestrogens

Sewage treatment using ozone, chlorine dioxide or activated carbon removes most oestrogens, but these processes are expensive and unnecessary, a study has found

A report on the concentration of drugs in UK drinking water has come to reassuring conclusions despite a lack of actual measurements.

The Environment Agency has been trying to assess the risks posed by the cocktail of drugs entering the environment through sewage effluent and farm wastes. However, with only rudimentary requirements for environmental risk assessment of human pharmaceuticals and no access to information held by manufacturers, the Agency has an uphill battle - and is receiving scant help from the pharmaceuticals industry and its regulators.