“HS2 is an important part of the government’s plans for a low-carbon economy, helping us meet our climate change targets,” says the Department for Transport’s (DfT) latest consultation document on its HS2 high-speed rail project.1

But if the new line succeeds in curbing domestic flights, highly coveted take-off and landing slots at Heathrow will instead be used for longer flights overseas with greater CO2 emissions.

So unless government has policies in place to prevent this, HS2 will increase UK emissions. A DfT spokesman said it has no such policies. To control rising aircraft emissions, it will rely on aviation being brought within the EU emissions trading scheme (EU ETS) next January, he said (ENDS Report 430, pp 35-36 and p 65).

The EU ETS will cap aviation emissions across the EU. But that will not stop Heathrow’s emissions rising as domestic air travellers switch from plane to HS2, liberating slots for longer flights. Airlines could also cover their rising emissions using Clean Development Mechanism credits bought from outside the EU.

While HS2 is set to increase total UK emissions, the government can point out that the UK’s share of international aviation is excluded from UK carbon budgets and targets.

However, the Climate Change Act 2008  obliges government to include aviation emissions in carbon budgets before the end of 2012, or explain to Parliament why it will not do so.

“The question now is given no third runway, how we can maximise the effectiveness of our limited capacity at Heathrow. That means more long-haul flights.”

Mr Milton added: “Every time BMI or British Airways have cancelled a domestic route in the past, they’ve replaced it with a more profitable medium- or long- haul route. That’s exactly what will happen when HS2 comes and more domestic routes get cut.” 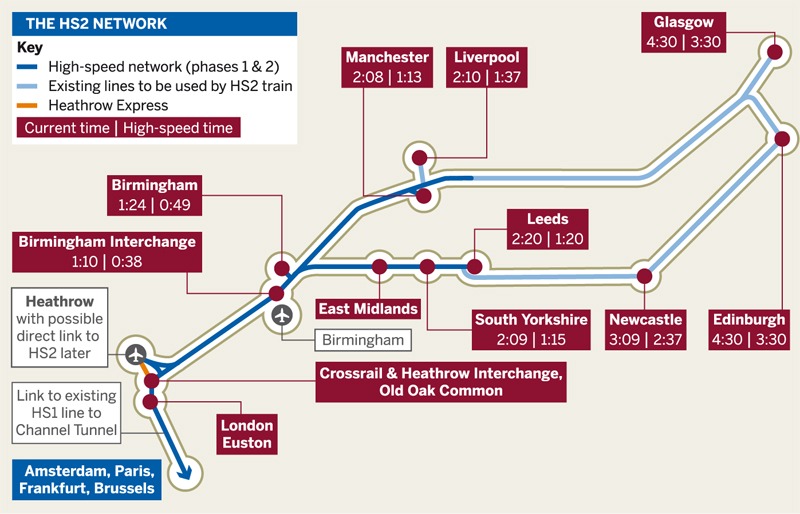 BAA hopes that HS2’s planned link  to the existing HS1 line from London’s St Pancras station to the Channel Tunnel (see graphic) will also entice some air travellers flying to Heathrow from nearer European airports to switch to high-speed rail. That would free up further capacity for long-haul flights.

“Any rail journey under three hours is competitive with aviation,” said Mr Milton.  “If HS2, through a connection with HS1, brings Paris and Brussels within this range, then we are hoping it can attract people who would otherwise have flown [to Heathrow] from there.

“For UK Plc, the most valuable flights into Heathrow are those that connect to the US, the Far East and the emerging [Brazil, Russia, India and China] economies. The real benefit of HS2 is its ability to free capacity for these long-haul destinations.”

An appendix to the HS2 consultation’s appraisal of sustainability covering the project’s greenhouse gas emissions says the potential increase in UK aviation emissions caused by HS2 “has not been quantified”.2,3

It finds there are major uncertainties about the overall extra emissions associated with running HS2. These depend mainly on passenger demand and the carbon intensity of the UK power grid.

The extra ‘embedded emissions’ associated with building the line are small, as are the CO2 reductions HS2 will bring about as motorway drivers switch to rail and some conventional rail travel diverts to high-speed lines.

In its latest consultation, issued in February, the coalition sticks with the previous government’s plans for a largely public-sector financed Y–shaped network, linking London to Birmingham with prongs extending to Manchester and Leeds.

For now, the government is only consulting on phase one, a 225-kilometre line from London to Birmingham, which it hopes will open in 2026. Up to 14 trains an hour would run from a rebuilt Euston station to a new Birmingham city centre station, each carrying up to 1,100 passengers.

Travelling at 360km per hour (eventually 400km), this would bring the two cities within 49 minutes of each other.

A new interchange station at Old Oak Common in north-west London would link HS2 with Heathrow, Crossrail and the existing HS1 line running from London St Pancras to the Channel Tunnel.

But by the end of this year, HS2 Ltd – the company set up by Labour in January 2009 to assess opportunities for a high-speed rail network – will complete detailed route maps for the onward links to Manchester and Leeds via the East Midlands and South Yorkshire. Proposals for a direct spur to Heathrow will also be made.

The government will then consult on these and hopes ‘phase two’ will be constructed by 2033 (see timeline).

The construction and operating costs for phase one are huge (£24bn), and will not be covered by fare revenues. At £130m per mile, the scheme is far more expensive than the average European high-speed system built to date.

But the DfT says the overall benefits to society, though less than originally estimated, will greatly outweigh the costs.

The government says the most significant benefits would come from reduced journey times. This is because DfT analysis assumes people are unproductive while on trains – a questionable assumption in the age of mobile broadband.

Building HS2 would free up much- needed capacity on the crowded West Coast Main Line while many motorway and domestic air journeys would switch to high-speed rail, says the consultation document.

But the project’s sustainability appraisal contradicts this last point, admitting that the car-to-rail modal shift “would not be sufficient to have any noticeable impact on air quality”.

London to Birmingham motorway traffic would be cut by less than 1%, it says.

Transport secretary Philip Hammond said: “Above all it will tackle the north-south divide more effectively than half a century of regional policy has done – a prize that has eluded all modern governments.”

Steven Glaister, director of the RAC Foundation, questioned this claim: “Ministers are trying to hang the scheme on the ephemeral hook of uniting the nation, yet trains are mainly used by the better off and do little to reduce social exclusion.”

The sustainability appraisal also covers broader environmental impacts such as noise and damage to local ecosystems and habitats but, as with the carbon costs, they are absent from the DfT’s cost benefit analysis. Mr Hammond accepts there will be some adverse local impacts, but says these must be weighed against national interests.

In an attempt to mitigate some of the impacts between London and Birmingham, almost 50% of the government’s initially preferred route has been modified. While most changes have been minor, the biggest deflection has been by 1.6km.

There are now many more tunnels (29km), deep cuttings (90km) and ‘green bridges’ (2km) – cuttings that are roofed over and replanted – than previously planned (ENDS Report 422, pp 34-35). And 55km of the track will be located alongside existing railways and roads.

The previously envisaged impacts at Long Itchington and Ufton Wood sites of special scientific interest (SSSI) near Leamington Spa have now been largely avoided by extending the proposed tunnel beneath them.

HS2’s 20.5km passage through the Chilterns, a designated Area of Outstanding Natural Beauty, continues to cause the greatest controversy despite further work to curb visual and noise impacts.

One section of the route has been moved eastwards to help reduce noise and visual impacts at four villages in Oxfordshire. However, this has meant cutting into Helmdon Disused Railway SSSI, a calcareous grassland between Banbury and Milton Keynes.

The route planning has highlighted the difficulties of developing such a large scheme on a small, densely populated island. Trying to move the line to reduce one environmental impact is often likely to increase another.

The sustainability appraisal, drawn up by consultants Booz & Co and Temple, says no internationally protected sites of ecological interest would be adversely affected by HS2.

Three registered parks and gardens, two protected sites of archaeological importance, and an unspecified number of locally designated sites and important habitats such as ancient woodlands would be “physically impacted”, it says. Designated green belt land around a planned Birmingham interchange station serving the city’s airport and the National Exhibition Centre would be “significantly impacted”.

HS2 would pass through 16km of the highest risk flood areas. Here, it would be raised onto low ‘piers’ to protect the track and ensure flood water is not impeded.

About 245 homes would have to be demolished – fewer than the 300 initially anticipated – 200 of which would be council flats around Euston station.

And while 7,400 homes would be within 100 metres of the scheme, homes suffering high noise levels (of more than 73 decibels) have been reduced from the initial 350 to just ten.

But despite the improvements, opposition is growing. Seven councils – Warwickshire and Buckinghamshire County Councils, Coventry City, the district councils of Aylesbury Vale, Chiltern, Wycombe and South Buckinghamshire and the London Borough of Hillingdon – have joined force. Buckinghamshire alone has committed £100,000 to their campaign fund.

Dozens of existing local amenity groups are resisting the scheme, while new action groups have sprung up since the route was first published in March 2010.

A national campaign group, StopHS2, has formed. Its chairwoman, Lizzie Williams, who lives in an affected village in Northamptonshire, says the government’s proposals are “not just impractical from a noise and disruption perspective, they also fail to make good business, economic or environmental sense”.

Last November, Mr Hammond said he intended to “personally monitor the mitigation proposals over every mile of this railway”. Launching the latest consultation, he said an “extensive woodland planting programme” involving two million new trees will shelter nearby residents from the visual and acoustic impacts.

Only one major environmental NGO  is mounting a campaign against the scheme: the Campaign to Protect Rural England (CPRE).

Ralph Smyth, CPRE senior transport campaigner, told ENDS the group supports the principle of high-speed rail, but objects to much of the current proposals.

The CPRE is particularly concerned that HS2 “is not being planned in conjunction with demand management measures for road and rail, or crucially, with a wider transport strategy – essential if the scheme is to fulfil its potential”, he said.

He said the CPRE opposed the “unnecessarily fast line being proposed for a crowded island of this size”, and the “disproportionately high” levels of noise and energy consumption that would result.

And he expressed concerns about how the government’s consultation is being conducted: “This is a take-it-or-leave-it, one option consultation. It is nothing short of a breach of the Aarhus convention,” he said.

This sits uncomfortably alongside Mr Hammond’s claim that “this will be one of the biggest and most wide-ranging consultations ever undertaken by government”.

As they stand, the raft of documents accompanying the consultation make for confusing reading. The bulk of HS2’s benefits only accrue once the entire scheme is complete (in 2032 if all goes to plan). While the current consultation only covers phase one, the cost-benefit analysis covers a 60-year period and assumes no phase two, even though that would be built during the period.

BP and Shell have warned the European Commission against measures that penalise biofuels for causing indirect land-use change. But some member states are in favour.