Economic circumstances kept a lid on most environmental professionals’ earnings in 2010 and many face a further pay squeeze this year.

But a majority of green collar workers are happy in their jobs and half intend staying in their current role, for the foreseeable future. 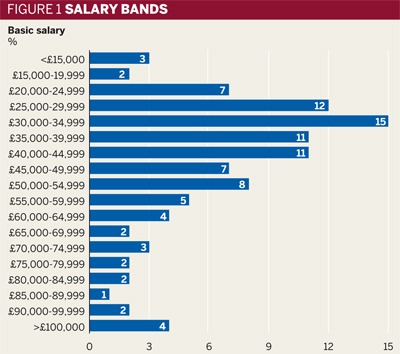 Not surprisingly, green professionals’ salaries are generally higher in London and the south-east. Half of survey respondents based in the capital earned £45,000 or more last year. One in three enjoyed a salary of £55,000 or more and almost a quarter were on £60,000 or more. 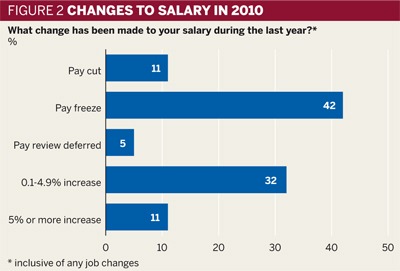 But environmental professionals’ salaries as a whole are little changed from a year ago, because of the dearth of 2010 pay rises. Most green-collar workers saw little or no change in their salaries last year. Two in five had their pay frozen, one in nine had their pay cut and 5% had their pay review deferred (see figure 2).

Among green professionals surveyed by ENDS, the incidence of 2010 pay freezes, cuts or review deferrals was particularly prevalent among those working in construction. Seven in ten had their pay frozen or cut and just one in three enjoyed a pay rise.

Of those working in professional, scientific and technical services or consultancy, two in five had a pay rise, but more than half of such rises were under 3%. Almost three in five had their pay cut or frozen, or their review deferred. 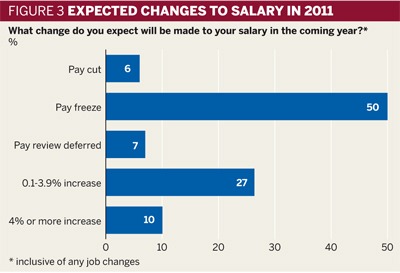 And almost all environmental professionals face a further real (inflation-adjusted) earnings squeeze this year. Half expect a pay freeze and only one in ten foresees a rise of 4% or more (see figure 3). But with inflation forecast at about this level, nine in ten will see a real pay cut (ENDS Report 433, pp 6-7).

Green professionals in the public sector will be hardest hit. Nine in ten of those in public administration expect a pay freeze or an absolute pay cut this year.

And those in the private sector will fare little better. Almost half of green-collar employees in professional, scientific and technical services or consultancy, for example, expect a pay freeze this year. A further one in six foresees a pay cut or a pay review deferral.

Andrew Cartland, managing director at recruitment consultancy, Acre Resources, is a little more bullish on 2011 pay prospects, but only for those at the upper end of the pay scale. “Generally, salaries will sneak up a little bit,” he says. “Pay freezes are more likely in the technical roles, whereas in the higher level roles, we’ll see top-end salaries increase, driven by corporates hiring.” 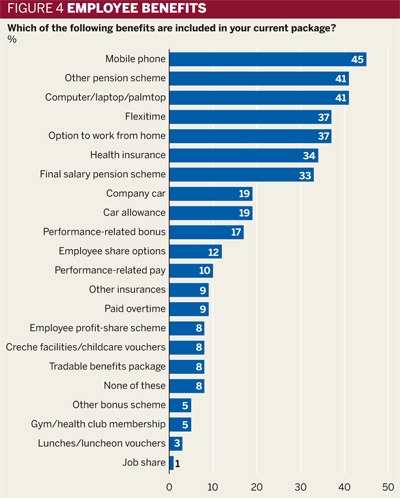 Some compensation for the generally flat salaries is the benefits most green professionals receive. Only 8% of respondents indicated ‘none of these’ when asked to identify which benefits were included in their current package from a list of 21 (see figure 4).

Three quarters said a pension scheme formed part of their benefits package. For one third, this was a final salary scheme and for two in five, another type of pension plan.

A mobile phone, cited by 45%, and a computer, palmtop or laptop, noted by 41%, were the next most commonly offered benefits. Flexitime and the option to work from home were each cited by 37%. One in three noted health insurance.

These seven benefits were also the most commonly offered in our last survey, just over a year ago. 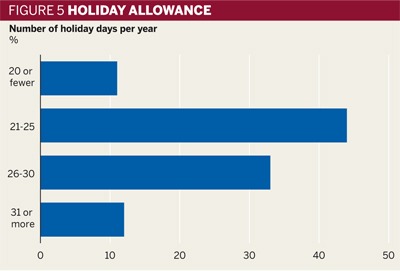 Of those able to attach a monetary value to their benefits, the lowest was just £7 and the highest £200,000. The median package was valued by respondents at £4,000 and half received benefits worth £1,500 to £7,000. Just one in eight claimed the value of their benefits exceeded £10,000. And holiday allocation remains reasonable for most (see figure 5). 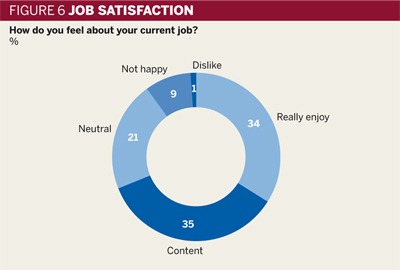 Most green collar workers say they are reasonably content in their work. When asked “how do you feel about your current job?” one third of respondents said: “I really enjoy it”. Another third said they were “content” and one in five said they were “neutral”. Only a tenth said they were “not very happy” in, or expressed “dislike” of, their job (see figure 6). These findings are akin to those of ENDS’ 2009 survey. 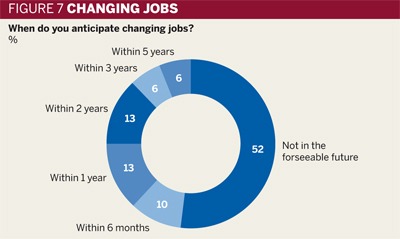 Half of them do not anticipate changing jobs “in the foreseeable future”. This may reflect job satisfaction, but also the perception that opportunities to move are limited (see figure 7). 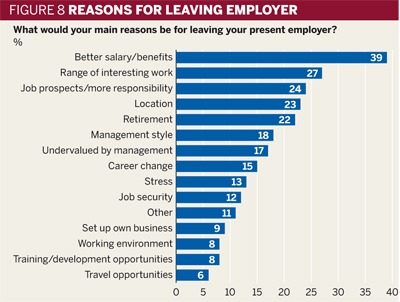 One in ten expects to change jobs within six months, 13% within a year and another 13% within two years. And despite the subdued outlook for remuneration, it is the prospect of a better salary or benefits that remains the key driver for moving, noted by two in five respondents this time (see figure 8).

Just over a quarter noted “range of interesting work” as a reason to move. “Job prospects or more responsibility” was cited by 24% and “location” by 23%. Only one in seven cited “career change” as a reason for moving jobs; further evidence of the general sense of satisfaction felt by most green professionals.