UK verified greenhouse gas emissions for the power and other industries covered by the EU emissions trading scheme (EU ETS) grew 2.4% in 2010 relative to 2009, according to analysis by ENDS. The rise effectively marks the end of the sharp falls recorded during the recession (ENDS Report, April 2010). Extreme winter weather across Europe, and outage of nuclear plant in the UK were also factors (ENDS Report, April 2011).

The preliminary EU ETS data for 2010, released by the European Commission on 1 April, revealed that emissions from the UK, accounting for 14% of the bloc’s total emissions reported so far, continue to be dominated by coal-fired power plants. These accounted for eight out of the ten top emitters. Collectively, the top ten emitters also account for a third of all UK traded emissions. 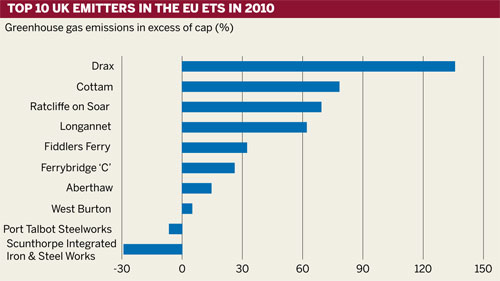 Drax coal-fired power station in North Yorkshire, the largest in the UK, continues to dominate the league. The four-gigawatt plant accounted for 9.5% of total UK EU ETS emissions in 2010, up from 8.6% in 2009. In 2010, it emitted almost two and a half times its free allocation of EU allowances, 13% more than in 2009, and was the fourth largest emitter in the EU ETS as a whole.

Scottish Power’s 2.4GW Longannet plant in Fife, Eon’s Ratcliffe-on-Soar plant and EDF’s Cottam plant, both in Nottinghamshire, made up the top four UK emitters with Drax.

Port Talbot Steelworks came fifth in 2010, accounting for 3% of emissions. It rose from eighth place, with 2.3% of total emissions, in 2009 as the recovery took hold. Scunthorpe Integrated Steelworks came seventh, emitting 2.5% of the total.

The early figures, which include most of the key UK emitters, are based on raw data for the first three years of phase II of the scheme, which ends in 2012. They follow provisional data from the energy and climate department (DECC) which reveal that economy-wide greenhouse gas emissions have risen by 2.8% since 2009. This makes 2010 the largest single year increase since the UN’s Kyoto Protocol base year of 1990. Even so, the UK remains on course to meet its target of 12.5% below 1990 levels by 2020.

At EU level, only 90% of installations have reported so far, making trends harder to discern ahead of the final data's release and analysis in May. The EU executive has not issued any analysis because the submissions have not yet been verified. But various market analysts have estimated the data submitted by 31 March showed a 3.15-3.6% rise in like-for-like emissions since 2009.

Point Carbon expects the total increase across the scheme to be a more modest 2.9% once all the data has been submitted. If this is correct, 1,935 million tonnes of carbon dioxide would have been emitted in 2010, 50Mt below the 2010 EU ETS cap.

The largest increase in traded emissions across the EU was in the relatively small coke sector, said Deutsche Bank. The only industry to report a fall was refining. Emissions from the power sector, the largest single contributor in the scheme, rose by 2.4%.