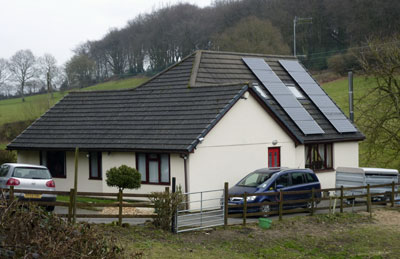 About 30,000 micro- and small-scale renewables are now claiming support from feed-in tariffs (FITs), a year into the scheme.

FITs pay the owners of electricity-generating renewables up to 5 megawatts peak capacity a tariff per kilowatt hour of electricity generated.

But on 1 April 2011, the first anniversary of the scheme, uptake levels were just 40% of what the previous government said was needed by now.

Data from Ofgem shows that 30,753 installations are now claiming FITs and that these are capable of generating 112MW of electricity (see table).

The majority, some 28,500, are solar PV units installed on domestic roofs.

Only 538 units have been installed on business and industrial premises so far.

The figures are far below expectations. Some 77,000 units need to be installed each year if the UK is to meet its EU renewable energy targets for 2020, according to the previous government’s impact assessment for the scheme (ENDS Report, February 2010).

Take-up is also below what the current government was expecting. Internal forecasts passed to ENDS show it expected 141MW of renewables to be claiming FITs by now, 28MW more than has been achieved. That gap is equivalent to more than 10,000 domestic solar installations.

In reality, the shortfall is higher than this because Ofgem's data also includes up to 5,000 units that existed before FITs came into force. Those could represent 14.5MW of capacity, assuming they are domestic solar units.

The number of new FITs claimants each month also appears to have peaked, according to the Ofgem data. About 2,600 were installed each month in the past three months.

It is unclear whether take-up will increase soon. In March, the energy and climate department (DECC) announced it was slashing support levels for solar PV projects above 50kW peak capacity and this has led to considerable uncertainty in the industry (ENDS Report, March 2010).

Grace Bennett, policy manager at trade body Micropower Council, said there could be several reasons behind the slower than expected take up, such as the fact consumers and businesses are still getting used to the technologies and supply chains are still developing.

In the domestic sector, there is also a lack of access to the upfront capital needed to buy micro-renewables.

She said the government needs to avoid tinkering with the scheme and undermining business confidence.