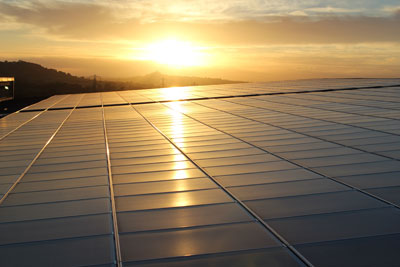 A group of solar developers has applied for judicial review of the government's plans to cut support for large-scale solar PV projects.

In March, the energy and climate department (DECC) proposed slashing feed-in tariffs (FITs) for solar projects above 50 kilowatts peak capacity by up to 70% (ENDS Report, March 2011).

The changes, which would come into force on 1 August, would "strangle at birth" the UK solar industry, according to the Renewable Energy Association.

The seven companies applied to the High Court on 19 March. The biggest name involved is German firm Juwi, which in April opened Europe's largest rooftop solar plant – a 7.4 megawatt peak capacity unit on a warehouse owned by tyre maker Goodyear Dunlop in Germany.

The firms say there are several grounds for a review:

The companies hope to have a decision on whether they can apply for a full review by 6 May, the date DECC's consultation on the proposed changes ends.

The application comes just weeks after the UK's largest solar scheme was announced.

On 31 March, Eaga, a major installer of energy efficiency equipment, revealed it is to install 35,000 solar PV units on social housing after securing £300m from banks including RBS, ?HSBC, Barclays, Lloyds and Santander.

It will offer social housing tenants the panels for free, but it, and the banks, will keep the income generated from FITs.

Eaga intends to install the units by 31 March 2012 because after that date the FITs tariff drops (ENDS Report, February 2010).

The panels will have a combined capacity of 100MW. DECC was expecting only 86MW of new solar to be built during 2011/12 so this development could actually force the government to also slash FITS for solar projects below 50kW (ENDS Report, February 2011).

Chris Rigg of Eaga, who led the deal, said he did not expect this to happen. "The government is firmly supportive of solar schemes below 50kW, particularly those that support social housing tenants so they can get free electricity."

Eaga has signed agreements with seven social housing providers. These include the London Borough of Ealing and South Wight Housing Association on the Isle of Wight.

The government is to significantly reduce feed-in tariff support for large solar projects from August, but support for farm-sized anaerobic digestion will be increased