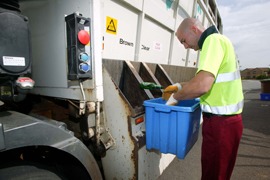 Welsh councils will all have to operate the same waste collection systems by 2013 under Welsh Assembly Government (WAG) plans to raise recycling rates and promote waste minimisation.

The proposal appears in WAG's municipal waste sector plan issued for consultation in June. This sets out how the government expects councils to achieve the high recycling targets set in its waste strategy.

The final version of that strategy was also issued in June. It differs little from the draft issued last year (ENDS Report May 2009), confirming a target for councils to recycle or compost 58% of municipal waste in 2015/16 and 70% in 2024/25. Councils must also lower waste arisings by 1.2% per year to 2050, it says.

UK governments have previously avoided prescribing how councils collect waste. However, in her foreword to the plan, Welsh environment minister Jane Davidson says: "I respect and value the sovereignty of local government but there is sometimes the need for collective universal action." WAG feels justified in prescribing collection systems as it directly funds 82% of council waste costs through grants. Its recommended collection system involves:

The plan proposes to withhold grant funding to councils if they do not introduce the suggested system. "If councils wish to adopt exceptions to this reference solution then such alternatives will have to be justified through the business case process… as delivering equivalent environment and economic benefits," it adds.

WAG is also likely to require recyclable collections be kerbside-sort systems, according to the plan. This is when workers sort recyclables into different components of collection vehicles. It will improve the quality of collected materials, WAG says, meaning they are more likely to be recycled into their original use.

WAG "has amassed a considerable evidence base that supports kerbside sort over co-mingled collections", the plan adds, but it will conduct more research before deciding. It does not mention variable charging for waste collections, suggesting that Wales does not feel it is needed to meet a 70% recycling target.

WAG also wants to prescribe the recycling services councils offer away from homes. Councils should install bottle banks to ensure glass is colour-separated, the plan says, and they must have at least one civic amenity site that takes a full range of recyclables. It even asks for views on whether councils should be required to introduce food waste and recycling collections for businesses.

WAG also asks for views on whether councils should be required to pay recycling credits to third parties that recycle municipal waste outside council contracts. This "could result in greater and more cost-effective recycling," it says, although it admits this could become an "open-ended and unpredictable cost" and see councils simply paying to recycle business waste. The plan is out to consultation until 13 September.

The plan also proposes measures to encourage waste prevention and reuse. These include: