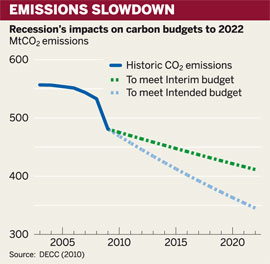 Britain is set to miss its third carbon budget for greenhouse gas emissions between 2018 and 2022 unless there is a step change in emissions mitigation, the advisory Committee on Climate Change (CCC) has warned in its second annual progress report to Parliament.1

The Climate Change Act 2008 set the UK a series of five-yearly carbon targets culminating in an 80% cut on 1990 levels by 2050 (ENDS Report 407, pp 14-15).  The committee is charged with recommending targets and monitoring compliance.

As a result, the UK could become a net exporter of EU allowances under the EU emissions trading scheme (EU ETS) by 2012, reversing its current status (ENDS Report 415, p 12). But by 2022, the UK risks falling behind its targets.

To meet the first three carbon budgets, emissions need to fall 2.5% annually in the traded sector. Emissions from industries covered by the EU ETS plummeted by 12.5% in 2009, compared with less than 5% in 2008.

In the non-traded sector, including homes, transport and agriculture, emissions rose by 0.4% in 2008, but fell nearly 6% in 2009. To meet the budgets, they would only need to reduce by 1.3% annually.

So the cumulative impact of the recession (ENDS Report 423, p 16) could generate an allowance surplus of up to 55 million tonnes of carbon dioxide equivalent by 2012 for sale or banking forward, the committee says. Meanwhile, genuine reductions linked to climate policies have been patchy and inadequate, says the report.

The committee says these easy wins should not be carried forward into the second budget period from 2013 because it would undermine mitigation efforts. Only big investments in low-carbon energy generation, improvements in building energy efficiency and electrification of transport will deliver genuine cuts needed by 2020.

Energy and climate secretary Chris Huhne accepted that falling emissions due to the recession should not be allowed to undermine the shift to a low-carbon economy.

The committee recommends the government considers moving to a 42% target, and will publish its detailed thinking on this when it publishes its recommendations on the fourth carbon budget from 2023 to 2027 later in the year.

But presenting the committee findings at the Royal Institute of British Architects on 30 June, chair Lord Adair Turner warned: “Despite [deep] emissions reductions in 2009, a step change will be required to meet the interim budget, let alone the intended budget.”

The latest report finds that, under the interim budget and taking into account the underlying trends in emissions, the UK is set to miss its third budget by 32MtCO2 equivalent. With a 30% EU target, the UK would be short by as much as 150MtCO2e. To put this into perspective, the UK’s entire power sector currently emits about 200MtCO2e annually. These findings contradict an assessment by the energy and climate department (DECC) in June that the UK will just meet its third budget (ENDS Report 425, p 17).

The committee says slow progress on decarbonising the power sector identified in its 2009 report (ENDS Report 417, p 12) has continued, due to a shortage of capital in the recession and a dysfunctional electricity market focused on quick returns, namely investing in new gas-fired generation.

It also says planning delays continue to hit wind farm expansion. It welcomes planning reforms and the energy national policy statements, but warns that replacement of the Infrastructure Planning Commission must not further increase planning uncertainty.

The report highlights the need for a carbon floor price tax on power sector emissions allowances in the EU ETS to boost low-carbon investment in the interim until the EU goes for a 30% target.

But it also repeats its warning that a floor price will not work unless there are also urgent reforms to the dysfunctional electricity market. Incentives are needed to reward longer term investment in low-carbon generation, it says. There has been no development on this since options were published last year by Ofgem (ENDS Report 421, pp 44-45), and in DECC’s electricity market review published alongside the March 2010 Budget (ENDS Report 422, p 6).

The committee also stresses that a carbon floor price should aim to boost new low-carbon investment, not create windfall gains for existing plant such as ageing nuclear capacity.

It is not prescriptive about how the carbon tax would work, and on recycling of revenues to industry (ENDS Report 423, pp 14-15). Committee chair Lord Turner told ENDS: “Our point of view is simply to have a carbon [price] underpin. The issue of recycling is a separate issue for us. I don’t think we would accept that it has to be revenue neutral.” But he added: “What you might do in some industrial sectors we would have to think about more.” There was no reason for the tax to be revenue-neutral in the power sector, he said.

The committee is also concerned at the impact of the current ‘dash for gas’ on carbon budgets (ENDS Report 424, pp 15-16). It wants to see at least one of the UK’s four demonstration carbon capture and storage plants dedicated to gas turbine plant and an emissions performance standard to ensure no new unmitigated gas-fired plants are built after 2020. It also says there needs to be more policy detail on support for CCS demonstration plants.

The report says the framework for the new renewable heat incentive needs to be finalised urgently to allow the early investment needed (ENDS Report 425, p 17). This could raise renewable heat penetration from 1% currently to 12% in 2020, but there are still huge uncertainties. A key priority remains home energy efficiency (ENDS Report 423, pp 36-40), with cavity wall insulation rates needing to double and action on solid wall insulation, it says.

The CCC welcomed the Coalition’s emphasis on home energy efficiency through the proposed new Green Deal (ENDS Report 425, pp 57-58). But it calls for clarity on how the scheme will work.

Uncertainty over support for renewable heat

The government has yet to spell out how it will support the installation of heat-generating microrenewables. Meanwhile, details on people claiming feed-in tariffs have emerged

UK will meet the 2022 carbon budget

New government projections forecast the UK will just scrape through its legally binding carbon budgets to 2022, based on policies set in place by the previous Labour administration

The new House of Commons’ first debate on environment and energy raised concerns about the Lib Dem-Conservative coalition’s programme. It featured the maiden speech of Caroline Lucas, the UK’s first Green MP

Dash for gas could squeeze out low-carbon generation

Far from looming blackouts, the current energy market is likely to deliver a glut of new gas-fired power stations, threatening the future of low-carbon generation and jeopardising the UK’s binding carbon budgets by 2020

Both the Climate Change Levy and the EU Emissions Trading Scheme have failed to boost investment in decarbonised electricity to date. Conservative plans for a carbon floor price tax could succeed, but important details are lacking.

Only a ‘step change’ will meet UK carbon budgets

The Committee on Climate Change says government policies need to ensure greenhouse gas emissions reduction rates are more than doubled and the dysfunctional electricity market must be fixed to boost low-carbon investment.

The UK continues to import large tonnages of carbon allowances to comply with its cap set under the EU emissions trading scheme.

A high-powered advisory group has proposed UK greenhouse gas emission cuts of up to 42% by 2020 in the first three Carbon Budgets under the Climate Change Act. Electricity decarbonisation is a key focus.