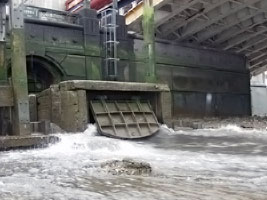 The projected costs of Thames Water’s ‘super sewer’ tunnel have more than doubled to over £4bn, a statement from environment secretary Caroline Spelman has revealed.

The project will catch and treat dozens of storm sewer overflows into the tidal river Thames from the capital’s overloaded Victorian sewers. The discharges pollute the river with 39 million tonnes of sewage every year.

Thames Water proposes a four-mile tunnel from a huge overflow into the river Lee near Stratford to its Beckton sewage works. It plans another 24-mile tunnel from west London to Beckton running under the Thames tideway.

The scheme gained government approval in spring 2007 under the threat of legal action from the European Commission. The 1991 Urban Wastewater Treatment Directive requires sewers to have sufficient capacity to prevent frequent discharges to watercourses (ENDS Report, October 2009).

In 2007, the scheme was estimated to cost less than £2bn. Now the cost of the Thames tunnel alone is put at £3.6bn. The shorter Lee tunnel, which is already under construction, is estimated at £635m.

A Thames Water spokesman said: “The cost has moved because we have a whole lot more detail about delivery of this project. It will go deeper under London than anyone has ever gone before.”

The company will start a 14-week public consultation on the preferred route and construction sites for the Thames tunnel on 13 September. Construction is due to begin in 2013 and be completed by 2020.

Building the tunnels will add £60-65 per year to average domestic Thames Water bills from 2018. Thames currently has the cheapest bills in England and Wales but is likely to lose that place as the costs of the scheme roll in.