Speaking at a Confederation of British Industry seminar, Mr Barker said he was “not happy” with the CRC, which he described as “too complex” and “too bureaucratic”.

A review of the CRC is already under way as part of a suite of energy policy proposals (ENDS Report, August 2010). It is looking at how to make the CRC “less burdensome” for business, Mr Barker said.

His comments follow rising criticism of the CRC. Manufacturers’ trade association the EEF and the Policy Exchange thinktank have called for it to be scrapped (ENDS Report, August 2010).

Pressure for reform is increasing despite the CRC not yet being fully implement. Participants are still registering for the scheme. The first annual report and league table of emissions performance is not due until next July, and the imposition of a cap on emissions not until 2013. 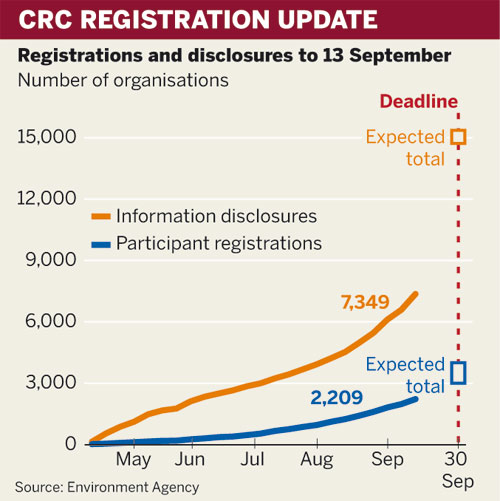 Meanwhile, registrations are picking up as the 30 September deadline approaches, though there is still no sign that all the organisations expected to register will do so (see figure).

By 13 September, less than three quarters of the expected 3,000-4,000 full CRC participants had registered, according to scheme regulator the Environment Agency.

More worringly, only half of the expected 15,000 organisations required to make an information disclosure had registered.

Organisations that fail to register on time face the threat of significant financial penalties. The possibility that large numbers will miss the target has led to calls for the deadline to be extended.

Speaking at the seminar, Mr Barker ruled out any postponement. However, he added that he had instructed the agency to be “very sympathetic” to organisations that miss it.

The agency itself has already said it will not prosecute tardy organisations as long as they get in touch and make every effort to comply.