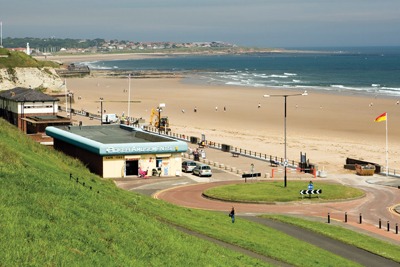 Blue Flag beaches close to storm sewer overflows will not retain the premier swimming safety award unless there is real-time monitoring and the ability to warn bathers in case of a sewage spill. The new requirement will impose extra responsibilities on councils.

The change has been announced by Keep Britain Tidy and its counterparts in Northern Ireland, Scotland and Wales, which operate the Blue Flag scheme. This follows a campaign by NGO, Surfers Against Sewage (SAS).

Blue Flags are the premier award for recreational bathing waters. To obtain one, beaches must achieve the highest ‘guideline’ microbiological water quality standard under the EU Bathing Water Directive and offer facilities such as toilets and first aid.

SAS says there are 34 Blue Flag beaches, about 25% of all flagged beaches in Britain, close to sewer overflows that lack real-time discharge warning systems (ENDS Report 427, p 25). Some sewer overflows have telemetry systems in place to record when they operate, but these are often designed only to gather data and not to generate warnings.

Keep Britain Tidy says it is talking to environment agencies about the location of discharges. Andy Cummins of SAS said it should not be a problem for beaches to install warning systems over the winter and remain eligible for Blue Flags.

Environment Agency lead on bathing waters Christine Tuckett doubted that the new scheme would make much difference: “In the majority of cases where there are overflows next to bathing beaches they are not a huge problem,” she said. Problem overflows have generally been dealt with by previous water industry investment, the agency believes.

But she warned more effort was needed to address other sources of pollution, such as farmland run-off and sewer misconnections.

The agency is attempting to further improve bathing water quality in preparation for tougher microbiological limits from 2015 under the revised 2006 Bathing Water Directive (ENDS Report 418, p 28).

“There is also a public information issue here,” Ms Tuckett added. The revised Bathing Water Directive will require designated beaches to display predictions of water quality, so there is a need for beach owners – generally councils – to develop notice boards and websites to keep users informed.