The UK’s policy of bringing the bulk of decommissioned offshore oil and gas rigs back to shore for final disposal should be reversed, argue conservation experts.

Instead, the ageing structures should be left entirely or largely in place, in a ‘rigs to reefs’ policy. This would boost species richness and abundance in the over-fished North Sea, partly by providing additional habitat but also by acting as exclusion zones for fishing boats. Trawlers would keep their distance because of the risk of snagging their nets.

This is one of 25 policy options for sweeping reform set out in an academic paper written by 30 nature conservation experts. The panel is drawn from university ecology departments, NGOs such as the Woodland Trust and the RSPB, and government bodies including the Forestry Commission and the Scottish Environment Protection Agency.1

They teamed up to select the highest priority policy options which should be pursued by the government and devolved administrations. Through a process of intensive discussion and voting, they whittled down an initial long list to the 25 options.

Major changes to the EU’s Common Agricultural Policy are proposed (see box). There is a strong emphasis on identifying and giving incentives to ‘ecosystem services’ provided by natural and semi-natural habitats, such as flood protection, maintaining water quality, storing carbon and raising everyone’s quality of life. 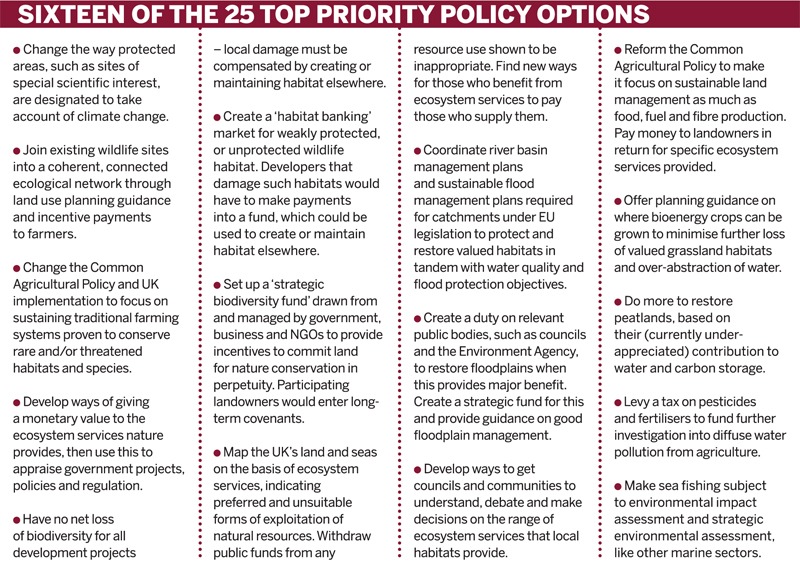 The proposed oil and gas rigs policy is striking because it was environmentalist feeling in general, and Greenpeace’s Brent Spar campaign 15 years ago in particular, that led to the current policy.

Under an international marine treaty, the OSPAR convention, north-east Atlantic nations such as the UK pledge to completely remove defunct offshore structures, with limited exemptions.

The cost to the UK industry could be up to £19 billion over the next two decades, but this will largely be fed through to government because oil and gas companies can claim rebates on production taxes (ENDS Report 426, pp 40-44).

The paper, published in the Journal of Applied Ecology, points out that cutting up and removing the vast structures in itself could cause significant environmental damage. The authors argue that Britain should seek to amend OSPAR.

Another striking proposal from this expert panel is to change the way Britain implements EU legislation on protected species.

The panel argues that a great deal of effort goes into protecting local populations of species that are “frequent and widespread across the UK and its surrounding seas”, including the great crested newt, some bats and cetaceans. But those resources could be better directed towards conserving other species and habitats “deserving greater conservation effort”.

The great crested newt has become almost infamous among conservationists as an EU protected species. It is far from uncommon within the UK. But whenever construction threatens an area where it is likely to be found, the developer must make expensive efforts to find and collect all of the animals and translocate them to other suitable habitats. This work must be done under licence from Natural England or its devolved administration equivalents.

The paper says the UK could change the way it implements EU law on protected species to achieve a better overall outcome for nature conservation. When a development proposal threatens to destroy habitat at a particular site, instead of spending big sums investigating, collecting and translocating EU protected species likely to live there, the same amount of money could be used to create or maintain a larger area of this habitat type elsewhere.

Cambridge University ecologist Professor William Sutherland, the paper’s lead author, said it had been sent to the environment department in the hope it would help shape the white paper on the natural environment currently being drawn up by DEFRA.

But several of the recommendations would involve creating new public sector-financed funds, and new taxes or charges on business. The government is unlikely to smile on those.