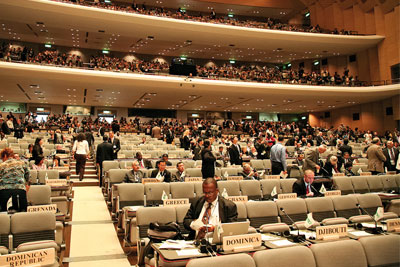 The 10th Conference of Parties (COP10) to the UN Convention on Biological Diversity (CBD) has opened in Nagoya, Japan. It is to run until 29 October.

The 193 parties to the Convention are discussing a headline target and new strategic plan on biodiversity conservation to 2020, as well as a ‘vision’ for 2050. There are only three non-parties: the US, the Holy See and Andorra.

The CBD was one of three major global conventions that emerged from the 1992 Rio Earth Summit – the others were the Framework Convention on Climate Change and the Convention to Combat Desertification (ENDS Report, May 1992).

It has three objectives: the conservation of biological diversity, the sustainable use of nature, and the fair and equitable sharing of the benefits arising from the use of genetic resources, for instance cancer treatments derived from rare plants.

The draft 2011-2020 strategic plan sets out 20 targets under five goals. The five are: to mainstream biodiversity across government and society; reduce direct pressures on biodiversity and promote sustainability; safeguard ecosystems, species and genetic diversity; enhance benefits to all from biodiversity and ecosystem services, and improve knowledge management and capacity building.

Each of the 20 targets is supposed to be specific, measurable, ambitious, realistic and time-bound. Success at COP10 will not be achieved, without these promises being fulfilled. In the draft text, many of the most difficult or controversial details are yet to be agreed and remain in square brackets, with a huge gulf in ambition separating different options.

Even so, the draft is seen as an improvement over the plan to 2010, because it aims to address the underlying causes of biodiversity loss.

Earlier this month, the European Parliament passed a resolution setting out MEPs’ goals for COP10. It expressed concern over a lack of urgency in discussions and underlines the need to “drastically increase the global funding for biodiversity”.

Harmful subsidies should end, there should be zero net deforestation by 2020 and 20% of land, fresh water and oceans should be designated as protected areas.

This is a key issue, because fine words on biodiversity are unlikely to translate into cross-governmental action without the support and interest of treasury departments around the world (ENDS Report, August 2010).

In a recent parliamentary debate on biodiversity, Labour MP Barry Gardiner said that in setting the failed 2010 targets, “The UN willed the objective but not the means. The integration of the valuation of natural capital into government accounting frameworks is that means.”

The MEPs’ resolution was largely in line with the pre-conference positions of major NGOs including WWF, Greenpeace and the International Union for the Conservation of Nature (IUCN).

All argue for the need to boost biodiversity funding and all are in favour of using ‘innovative’ financial mechanisms. These could include habitat banking or biodiversity offsets (ENDS Report, August 2010). But WWF stresses such funding sources should complement, rather than replace, existing public funding.

IUCN called for a “necessary and feasible” one hundred-fold increase in resources by 2020. The UN’s Global Environment Facility is expected to be called upon to mobilise resources and some parties, including hosts Japan, are thought to be planning new trust funds for biodiversity conservation.

It is widely acknowledged that a lack of money was one of the main reasons for the failure to meet the 2010 target. But the debate over resources seems likely to be overshadowed by current pressures on government spending.

Following a 14 October meeting, European environment ministers said the EU would be unable to commit new funds at COP10. European Council conclusions agreed at the meeting repeatedly stressed “the need for a balance between an ambitious new CBD strategic plan and the availability of capacity and resources”.

UK environment minister Richard Benyon said in September that British commitments would have to be approached “in the context of our overall requirement to reduce the deficit”.

Yet spending on biodiversity across the UK is already well below the required level, according to a report for the environment department (DEFRA) by GHK Consulting.2 Their figures suggest spending is one-third too low, with an annual £273m shortfall. And DEFRA faces 25-40% reduction in its budget following the comprehensive spending review on Wednesday 20 October.

Another major part of the meeting will be the planned adoption under the Convention of a protocol on access to, and sharing the benefits of, genetic resources. 2010 was set as a deadline for this much-discussed agenda item.

Other items up for discussion include greater joint working with the climate change convention, such as efforts to ensure action to reduce greenhouse gas emissions from deforestation do not have negative biodiversity consequences.

Similarly, biofuels’ impacts on biodiversity are to be discussed and geo-engineering schemes attempting to offset some of the negative impacts of climate change could be banned (ENDS Report, September 2009). Bracketed text, if agreed, would see an effective moratorium on “climate related geo-engineering activities” until an “adequate scientific basis” is in place.

The final synthesis report on The Economics of Ecosystems and Biodiversity (TEEB) is due to be presented to COP10. The so-called Stern report for biodiversity was launched by the UN in 2007 and has already published studies aimed at policy makers (ENDS Report, November 2009) local government, and business (ENDS Report, July 2010).

Towards sustainability – a long and winding road

Government economists want policy and law making to cease conflicting with sustainable development. But, reports Nicholas Schoon, there is a long way to go

The government is asking for ideas on policy for England’s natural environment for a white paper due next spring.

Biodiversity loss is costing trillions per year, according to the UN. Business must start addressing its part in the problem, it says

Study to put economic value on the services ecosystems provide

Policymakers must assess the financial value of ecosystem services to help develop strategies to protect them, a major project on the economics of biodiversity loss has recommended.

Geoengineering will not be a silver bullet to solve our climate woes, a major report from the Royal Society has concluded. Some schemes might usefully add to mitigation activities but more research is required to establish their safety and efficacy.