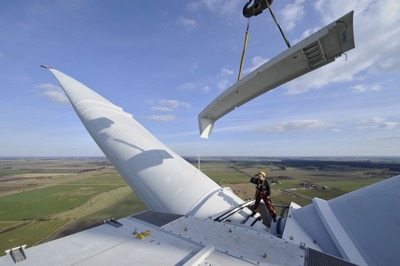 The government appears to have opened up the green belt to development of onshore wind farms in a revised national policy statement (NPS) on renewable energy infrastructure.

The NPS was issued for consultation on 18 October. It outlines how the Infrastructure Planning Commission (IPC) should consider planning applications for several types of renewables including onshore wind farms above 50 megawatts peak capacity.

The IPC will close in 2011, but its replacement will also use the document (ENDS Report, July 2010).

The previous government's NPS said there was a presumption against development in the green belt – the designated open land around big towns and cities.

Renewable developers would "need to demonstrate very special circumstances" that "clearly outweigh" any impact on the openness of the landscape, it said.

But the revised statement appears to loosen this restriction. It refers to the government's overarching energy NPS which says "it may be possible for an applicant to show that the physical characteristics of a proposed overhead [power] line or wind farm are such that it has no adverse effects which conflict with... green belt designation".

Gemma Grimes, head of onshore wind at trade body RenewableUK, welcomed the change for clarifying that development can occur in some cases. Wind turbines may not impact on the openness of green belt because "you can still appreciate the view behind a turbine", she said.

However, Paul Milner, senior planning officer at the Campaign to Protect Rural England, expressed concern that it did weaken controls and "shifts the burden of proof to objectors".

The rest of the renewable energy NPS differs little from that issued last year. It still does not refer to the cumulative visual impacts of onshore or offshore wind developments.