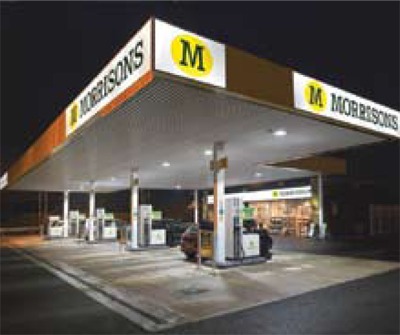 Since 2005, Morrisons supermarkets has embarked on a journey towards energy efficiency and lower greenhouse gas emissions – slashing energy bills and becoming the first major food retailer to gain the Carbon Trust Standard in 2008.

Morrisons, with its head office in Bradford, inevitably has a significant environmental impact due to energy use and emissions from its extensive operations. It is the UK’s fourth largest supermarket chain, operating more than 430 stores, almost 300 petrol stations and 12 giant distribution centres.

It is also the UK’s fifth largest food manufacturer, with 14 UK-based manufacturing sites including its own bakeries, abattoirs and produce packing plants. Bringing good practice in energy efficiency to such a large, diverse company is a huge challenge.

But energy efficiency and carbon reduction initiatives now permeate its business, with more than 100 projects being rolled out, ranging from behavioural change to state-of-the-art software, vehicle route and load optimisation and high-cost technologies.

Staff training is key to Morrison’s energy efficiency drive. It has trained 130,000 staff at all levels in energy awareness through its “switching on, switching off” best practice and climate change awareness campaign.

This programme’s success was recognised in 2007 with a National Training Award. It has developed into a wider “cut the carbon” campaign, with induction for all employees, supported by on-site champions.

The biggest opportunities come from stores. It saved 240,000 tonnes of CO2 equivalent emissions between 2005 and 2009, in cooperation with the Carbon Trust. This was primarily through necessary phase-out of refrigerants with high ozone-depleting and global warming potential (ENDS Report 421, p 30), and efficient use of air conditioning.

But refrigeration system updates provide opportunities for energy efficiency. Over the past three years, Morrisons has spent £100m on refrigeration efficiency and development, rolling out CO2 fridges to 60 sites so far.

Continuously running an adjustable DC fan is more efficient than switching an AC fan on and off, and a small reduction in speed of 20% halves the power needed to run it. Variable speed drives to chillers have also been fitted at food production sites.

Other, high-tech cost-saving measures include leak-detection systems and refrigeration optimisation equipment. The company has invested £2m in leading-edge refrigerant leak detection to cut wastage, and a further £1m in monitoring energy use. Installation of optimisation equipment in stores will soon save 5% on energy use at each site, with further savings from insulating blinds that drop over display cabinets at night.

Training in refrigeration use is another element in Morrison’s strategy. Mr Butts told ENDS: “There was a shortage of suitably qualified engineers in the market so we’ve set up our own training facility.”

This training has won Morrisons prizes in the Cooling Industry Awards over the past two years. It also stands out for covering contractors’ fitters. All fridge engineers will now attend one-day Carbon Trust Real Zero workshops to promote low-carbon, energy efficiency and cost reduction.

Other energy efficiency measures have been rolled out across its estate, including submetering and automatic lighting controls in 292 stores. Submeters are internal meters installed throughout Morrison’s facilities to track energy use and cut waste, paying for themselves in as little as six months.

In many locations, more expensive combined heat and power (CHP) systems are unviable because there is not enough on-site demand for the amount of heat produced. Even so, the group has already installed 150-kilowatt CHP systems at 30 stores.

At the Thornbury store in Bradford, waste heat from its central chiller is recovered by a heat exchanger for preheating use in the store’s hot water systems. This has enabled it to shut down one of its two gas-fired water heaters. Forty other stores will follow suit.

Morrisons has been working with the Carbon Trust and Enviros consultants since 2005 to develop a carbon management strategy.1 As a result, the chain cut its carbon footprint by more than 16% and energy intensity by 6% between 2005 and 2009.

The reduction in group energy use since 2005 has been a comparatively modest 5.2% per square metre against its 8% target for 2010. But this was against a backdrop of rapid growth, store numbers tripling and production plants expanding.

Morrisons will also increase its efforts on renewable energy sources from next year, and is working with its supply chain, notably on energy efficiency on dairy farms.

Morrisons aims to go far beyond mere compliance with CRC. To do that energy efficiency and waste minimisation must now be rolled out to all of its supply chain.