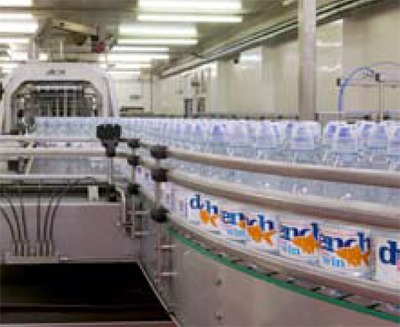 Cutting energy intensity and carbon emissions at plant level is challenging enough, but Britvic, based in Chelmsford, Essex, which sells more than 1.9 billion litres of soft drinks a year, has excelled in this.

That is why in 2009 Britvic joined a new Carbon Trust initiative to drive change through cooperation at sectoral level (see pp 5-8). As well as savings through good practice, the trust’s ambitious £15m Industrial Energy Efficiency Accelerator (IEEA) programme looks to identify large but also higher-cost opportunities common to a sector. A recalcitrant problem once solved can then open the way to wholesale change across that sector without risking the trading position of any individual firm.

The first phase involves an invitation to leading players in various sectors to collaborate in identifying energy savings.

In the second phase, the Carbon Trust will provide up to £250,000 in matched funding to consortia for detailed research and demonstration projects in collaboration with equipment manufacturers, subject to a convincing business case. In the final phase, lessons learned will be shared sector-wide.

Seven sectors – among them plastic bottle blow-moulding, including Britvic, Highland Spring, McBride and RPC Raunds – have completed the first phase. No sector has as yet reached the final stage, but several will do so during 2011.

Britvic already has a long energy-efficiency history, driven by rising energy prices and membership of the emissions-cutting food and drink sectoral climate change agreement (CCA). This largely exempted it from the government’s climate change levy.

Graham Dale, Britvic’s head of quality, safety and environment, says the company has overachieved its CCA targets, but there is now uncertainty over the scheme and possible carry-over or sale of the credits gained.

The company’s production is largely in the UK, with small quantities made in Ireland and some manufacturing in France. Only a small proportion of its products are imported into the UK, coming from France.

Manufacturing accounts for 95% of direct on-site gas and electricity use. Office and depot consumption is minimal.

On process energy efficiency, Mr Dale points to major progress on energy intensity: “If you look at delivered energy to site, we have delivered cuts in our energy in kilowatt hours per litre of product by about 23% between 2002 and 2010.”

He says these intensity cuts were delivered despite bringing PET bottle production in-house. This pushed up absolute energy use but cut the number of empty bottles being shipped in.

Mr Dale estimates that initially bringing bottle-blowing on-site pushed up absolute energy usage by 23%. But he stresses that the firm now produces 72% more product than in 1997, using 3% less energy in absolute terms, including in-house bottle blowing.

A key area for energy efficiency improvement has been in steam generation, used for cleaning and pasteurisation. Much of this was achieved by upgrading boilers.

But the commercial case for combined heat and power has not proved attractive yet, in part because Britvic has no by-product that it can use as a local energy source.

Bottle-blowing plant and packaging equipment are also heavy electricity users. Here, the firm has focused on voltage optimisation and supply quality improvement across plants, together with high efficiency motors and operational controls.

But by focusing on producing lightweight PET bottles, Britvic has also managed to cut blowing pressure and hence energy use. Compressed air can also be recovered and used for lower pressure processes.

Elsewhere, greater efficiency is achieved through operation and management of compressors, use of variable speed drives, not allowing idling of equipment to waste energy, and minimising production line stoppages. Automatic switch-off has also been fitted.

Lower level measures include fixing compressed air leaks and light detectors to ensure lighting is only on in areas being used.

Indirect energy use in transport is a substantial area outside Britvic’s direct control, but it stresses careful choice of contractors, and demand planning and route optimisation tools can slash fuel use here too.

A big success for Britvic over the past few years has been to get factory floor staff involved in “focused improvement” schemes, notably on energy and water saving.

Mr Dale believes the key message is “[focusing on] a combination of a few big engineering projects on large energy uses, and then total engagement to deliver incremental improvements at factory floor level.

“To do that, you need the workforce behind you and it has to be on their agenda. We’ve done that through training and education on the one hand, and eliminating wastage on the other.”

But there is a further secret to Britvic’s success: “Over the past four years we’ve developed and rolled out to all our sites [a system] that builds on the principles of lean manufacture and total productive maintenance.” The Britvic Work System evolved from workplace organisation tools, but now focuses on getting equipment operators more involved in maintenance.

Future plans involve greater use of external advice, notably through the Carbon Trust’s IEEA programme, to ensure nothing has been missed. This has already resulted in pilot roll-out of LED lighting.

Britvic has occasionally used consultants to identify opportunities. But Mr Dale says these can vary in quality, sometimes repeating what is already known or making impractical suggestions not in line with food quality safeguards.

Ultimately, it is down to the company to make it happen, Mr Dale stresses.