To lobbyists, government ministers and armchair theoreticians, the Carbon Reduction Commitment (CRC) Energy Efficiency Scheme may still be a troublesome puzzle, but for 2,764 public and private sector organisations it is a reality.

Having successfully registered as participants over the summer they are getting to grips with the next challenge, that of compiling an accurate annual report. And there to help, guide and hold them in line is the Environment Agency.

Andrew Hitchings, head of the agency’s 30-strong CRC team, is relieved November’s announcement by the energy and climate department (DECC) on the simplification of the CRC stressed there were no plans to scrap it. He is also grateful for the extra time the two-year delay to the start of phase 2 buys his team (see pp 4-9).

Under the old timeline, registration for the CRC’s second traded phase would have started in April 2011, overlapping with submissions of annual reports in July and the production of the first CRC league table.

However, the extra uncertainty surrounding the scheme is as much of a problem for the agency as any other organisation involved with the CRC. It does not know whether its role might change and is putting off preparations for emissions trading while the government consults.

The agency is the administrator for the whole UK and regulator in England and Wales where more than 90% of organisations are registered. Other bodies are responsible for enforcement in Scotland and Northern Ireland. The agency’s preparations began many years ago and its helpdesk was opened in April 2009. But DECC was still making changes to the CRC in January 2010, three months before registration began.

The complexity of the rules – or perceived complexity – has also kept the agency’s CRC helpdesk busy with 28,000 enquiries during the April-September registration window.

“It’s never an ideal situation for an implementer or participant to have as much change as happened in the CRC,” says Mr Hitchings. He found himself publishing guidance for companies that were insolvent or being wound-up in August and on the regulatory status of private finance initiatives in early September.

The latter was more of a clarification of the agency’s existing position than a change in the rules, says Mr Hitchings. All the same, he recognises the impact the guidance’s late arrival had on some organisations and the agency is working with them to complete their registrations.

Two groups of organisations registered under the CRC this summer: those who met the scheme’s full requirements and are now participants; and organisations that had half-hourly electricity meters (HHMs) in 2008, so had to make an information disclosure even though their annual electricity use by this route was less than 6,000 megawatt hours. The CRC covers emissions from all fuels, but only the electricity through HHMs mattered at this stage.

The requirement on information disclosers to register now looks likely to be cut from future phases of the CRC. This means the agency will have to carry out more checks to ensure all participants are registered but the total number of registrations will be reduced significantly.

This first registration period was accompanied by a chorus of doom, much of it from consultancies trying to whip up extra business. By August, they were saying that thousands of firms would be fined for missing the 30 September deadline, despite the agency’s promise to use financial penalties only as a last resort.

One difficulty was that the agency only had a list of billing addresses for the 135,000 mandatory HHMs supplied with electricity in 2008 from which to try to estimate the number of information disclosers and participants.

It was also impossible to know how many organisations would decide to disaggregate subsidiaries. This option, which allows subsidiaries to operate in the scheme individually, was only introduced at the last minute. In the end, only 2% of participants took up the offer.

The agency had already calculated in November 2009 that DECC’s estimate of 5,000 participants looked high (ENDS Report 418, p 7). It downgraded this figure to 3,000 midway through the registration period as it discovered how interlinked many companies were. But in the end it undershot even that, reaching only 2,780.

Each participant pays a £950 registration fee and a £1,290 annual subsistence fee to the agency. Mr Hitchings admits that the lower registration rate could leave it short. However the agency’s future expenditure is now uncertain because of the government’s simplification plans so this is not an immediate concern.

Despite the uncertainties, Mr Hitchings believes the registration period went smoothly. Many of the information disclosures came in at the last minute, with 1,000 users trying to log on to the agency’s IT system simultaneously in the last week. “An element of that was down to highly inaccurate, but I suppose motivational, reporting about the likelihood of enforcement,” he admits.

One catch though was the accuracy of submissions. At the start of the process, 40% of organisations were incorrectly identifying their parent body. There were also errors in meter registration numbers, information disclosers registered as participants and vice versa, and figures entered for electricity consumption that were wildly out.

The agency had, for instance, expected the largest electricity consumer to be Tata Steel, but about 30 organisations wrongly entered larger figures.

Most of this was the result of confusions between MWh and kilowatt hours, says Mr Hitchings. But the mistakes mean the agency cannot be sure of the total electricity supply under the scheme until it has checked the figures.

The agency is working its way through anomalous-looking entries, focusing on organisations close to the 6,000MWh threshold. Not every participant is being checked now, says Mr Hitchings, but the agency is also making a point of verifying submissions from organisations that think they should be partially or completely exempt from the CRC because they have signed climate change agreements with the government. 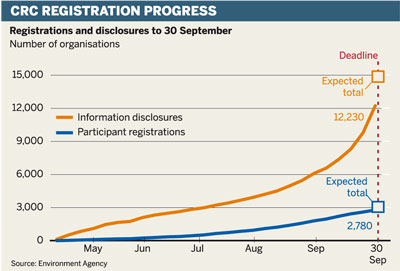 About 20% of HHMs also remain unaccounted for and are being chased up where consumption is significant and the agency believes it may lead to an organisation being a participant.

These processes should be complete by February 2011, giving the agency cleaner data to work from. DECC will also be given this data to help in its decisions on simplifying the scheme.

So far, the data clean-up has led to about 40 firms moving from the participant list to the information discloser list, and about the same number going the other way. About 50 organisations are still working with the agency to finish registration and another 150 being investigated as a result of unclaimed meters.

A handful of these are proving difficult to deal with. “There are a small number of organisations we speak to now who appear resistant to registration, perhaps motivated by the belief the scheme will not continue,” says Mr Hitchings.

While the agency wants to avoid prosecutions, it may become the only option. Everyone needs to be in the scheme in time to produce an annual report by the end of July 2011 otherwise law-abiding firms will be disadvantaged, says Mr Hitchings. Besides avoiding the fees, this would also leave them out of the scheme’s annual league table.

This deadline, and the time needed for the agency to carry out enforcement proceedings, means it will have to start thinking about this within the next few months.

At the same time, the agency’s relationship with correctly registered CRC participants is moving away from helpdesks to what Mr Hitchings calls a “more interactive account-management approach”. It will run workshops and seminars in the spring for groups of about 20 participants. These will be offered to every organisation in the scheme and cover the preparation of annual reports and ongoing compliance.

Annual reports set out in detail all the energy sources an organisation has included in the CRC and their associated carbon dioxide emissions.

They must also include information on turnover, or expenditure for public sector bodies, used to calculate the growth metric for the league table, and, in the first few years, the level of automatic metering and any certification of past performance such as the Carbon Trust Standard.

Given the level of registration errors, this may prove challenging for some participants. But it could also be helpful, says Mr Hitchings. Registration turned up a number of mistakes in organisations’ energy billing – charges for premises they did not own, for instance, or duplicate bills – and the same is likely to be true of other energy sources.

As this is the phase’s first year, participants must also provide a more detailed footprint report, setting out which emissions sources they are including in the CRC and their justification.

Both reports must be supported by information held in an evidence pack, which will be used if there is an audit.

To ensure the advice the agency gives on evidence packs and reporting is appropriate, it is carrying out trial audits on more than 50 organisations. These should be completed by January and will also help the agency test its own audit procedures.

The audit process will begin in earnest in July 2011 and will check a fifth of all CRC participants each year. The agency will choose targets based on their non-compliance risk rather than taking a cyclical approach.

Mr Hitchings expects about half of the audits to be desk-based and half to involve site visits by his CRC team. The agency may also employ consultants with energy-related auditing experience to help.

It has decided against using the local network of agency officers who enforce other legislative regimes. This is because of the small size of the CRC work, the regulation of organisational groups rather than sites and the capabilities needed to regulate the CRC, says Mr Hitchings.

In a move that might worry some participants, the agency is considering publishing as much information as possible from organisations’ annual reports alongside the CRC league table. This is in line with the government’s move to greater transparency, says Mr Hitchings. It will also ensure the table has as much impact on organisations’ reputations as possible.

Each organisation is likely to have its own scorecard and the raw data will be available for the media and campaign groups to do their own analysis, he says.

The CRC’s rules also make the agency responsible for selling allowances and it must put in place a secure accounts system with checks to ensure participants are not involved in fraud or money laundering. However, this work is being delayed until the future shape of the CRC becomes clearer.

Mr Hitchings will not be drawn into discussions on this issue. The agency’s main role, he says, is to implement the scheme. But he believes it will still play an important role: “The agency has learned an enormous amount from the registration process and through the helpdesk and will be feeding this into DECC.”

Clarity on future CRC phases may be some time coming, but in the meantime it is business as usual for the agency. Participants in the scheme would do well to take the same approach.