Excluding a few libertarians, everyone agrees that maintaining a decent environment requires regulation. However, that regulation needs to be proportionate and transparent. On the face of it, those are the principles that underpin the Environment Agency’s (EA’s) site compliance rating system.

The EA gives all regulated sites a compliance rating of between A and F according to how well they have complied with their permit conditions. A represents the best performing sites and F the worst. In terms of proportionality, the EA imposes higher subsistence fees for badly performing sites and lower ones for sites that are performing well. The idea is that poor performers should not be subsidised by their more compliant counterparts.

Just do as the EA tells you. Doing anything else just isn’t worth it

Take waste operators, for example. An A rating means paying 95% of the baseline subsistence charge, whereas an F rating means paying 300%. Given that the banding is also an indication of a site’s risk of environmental impact, operators can also reasonably expect the regulator to keep a close eye on operators in the worst compliance bands. Those in bands E and F are at risk of having their permits revoked if they cannot show the regulator they are moving swiftly towards better compliance.

“Most people in the regulated community would agree that good regulation should be risk-based and proportionate, so a compliance scoring system is an important part of the prioritisation process,” says Simon Tilling, partner at law firm Burges Salmon.

Case study: How one waste company got its top rating back

“Every scoring system has a degree of judgment and the EA’s system is not perfect, but it is a way of ranking the regulated community so the EA can focus resources on the poorer performers and most of our clients buy into that, unless of course they feel they have been unfairly treated. What clients want more than anything is a level playing field.” 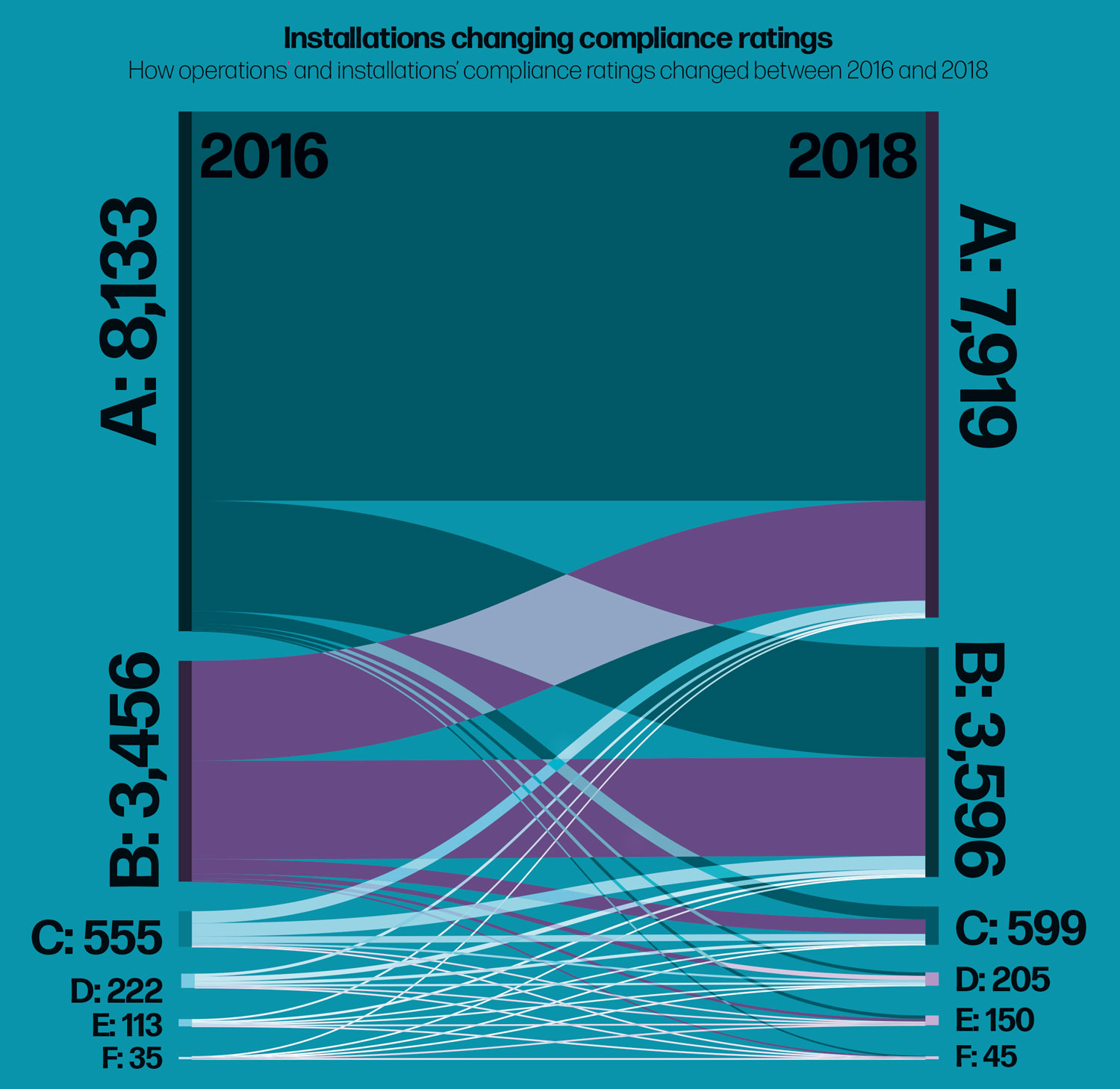 All of those downgrades will have come with substantial financial costs, but there is some debate surrounding exactly how transparent the system is. “The EA publishes details of how the scoring systems is operated so, in that sense, it is transparent,” says Emma Tattersdill, a member at law firm Freeths. “Operators can see what they need to do to improve their rating and there is a clear financial incentive for improving compliance.” 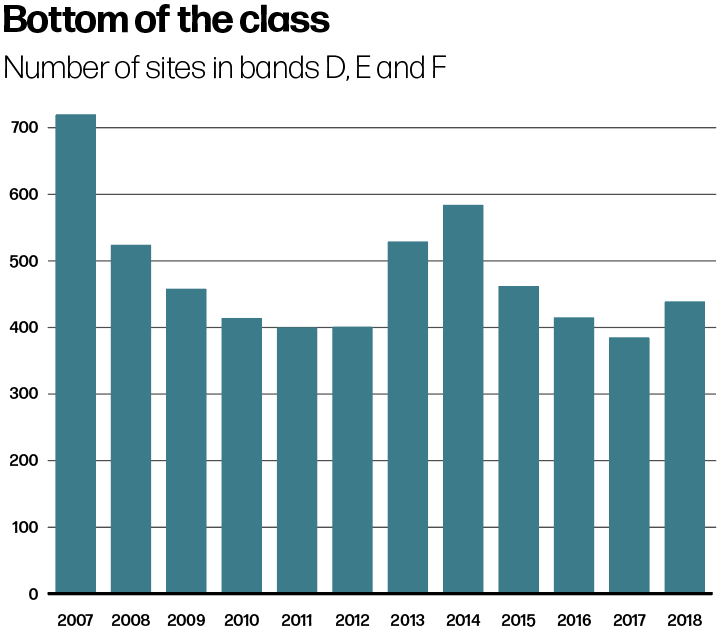 But Tattersdill adds “there can be a sense among operators that the focus on compliance against permit conditions means the system doesn’t always take account of the full picture or perhaps capture all environmental risks”.

Another issue is the fact the EA recently withdrew its operational risk assessment (OPRA) scoresheets, which some believe removed a layer of transparency. “How a site is scored became difficult to understand when the EA took away OPRA scoring spreadsheets,” says Samantha Pople, principal consultant covering environment management, permitting and compliance at consultants SLR.

“It’s really difficult to understand how the EA rates a site, plus it doesn’t seem to like telling you why and how it came to the conclusion. It used to be a lot more open and honest and detailed in the guidance.”

How to avoid being downgraded

Even with the lack of transparency, there are steps that site operators can take to protect themselves from a downgrade. “No one wants lots of attention from the regulators and so clients with good compliance scores want to safeguard those scores to prevent slipping down the pile and getting more attention than their competitors,” says Tilling.

There is broad agreement that making use of intelligent environmental management systems is essential. Not only is doing so good practice, if something does go wrong the regulator is likely to look more favourably on companies that can show they are at least trying. “I think the best thing to do is prepare and then use an environmental management system that is site-specific, with site-specific procedures, that is used by all on site and is updated on a regular basis,” says Pople.

Tilling adds: “In our experience, getting the basics right is key. Good environmental management systems, with a cycle of continuous review and improvement, are much better than ad hoc or reactionary steps when problems arise – or ‘fire-fighting’, metaphorically, or in some cases literally. Well-written and practiced incident-response plans will help in case the worst does happen.”

Training for all relevant staff is also an important safeguard. “The compliance work I’m dealing with at the moment is all about training and technical competence,” says Pople. “Also, having a good and well-trained technically competent manager [is vital]. It pays off to spend the time and money training your staff. Keeping up to date with EA updates to guidance and so on is also really important – then you can keep up with any changes.”

Tattersdill agrees. “Operators should ensure they have proper systems in place to secure compliance with the conditions in their environmental permits and it is vitally important that staff implement those systems,” she says. “So, training should ensure they are familiar with them and understand why they are important. Where practical, automated systems which reduce the potential for human error will help.”

In terms of the experience of operators on the ground, even companies that have had their compliance rating upgraded are reluctant to talk about their experience. One exception is Colson Transport, which had its rating upgraded from D to A between 2016 and 2018. The company’s site had been A-rated, but an incident involving waste-wood stockpiling led to a prosecution and the downgrade (see case study).

Ellie Colson, director of transport and compliance at Colson Transport, feels her business was unfairly treated by the EA. The problem material was removed the week after the EA’s visit and by the time of the prosecution, Colson Transport had invested £350,000 in upgrading the site to ensure any other potential issues were addressed.

“However, this whole process taught us that even the slightest thing cannot be missed on a waste management site,” she says. “Furthermore, we have ensured that we have implemented more robust policies, procedures and management plans, alongside experienced staff and site operatives to safeguard the A rating of our site. This has ensured we have continued to grow as a company.”

Asked what advice she would give to other site operators on how to achieve and maintain an A rating, Colson says an emphasis on compliance has to come from the top. “I would say they need to ensure the ethos of the site runs from top management to all staff and customers coming into site,” she says.

“As long as you stick to your management plan, ensure every member of staff are trained to the highest level and endeavour to solve issues ASAP and work with councillors, local residents and the EA if any issues are raised, the A rating will remain.”

Or, as another site operator who had managed to get their A rating back following a fire told ENDS off the record: “Just do as the EA tells you. Doing anything else just isn’t worth it.”