Its review of the evidence behind methods such as afforestation, enhanced weathering of rocks, upland peat restoration and installing heat pumps puts the situation bluntly. “All the approaches reviewed have strengths and weaknesses with regard to their potential to be used for offsetting residual carbon emissions. No silver bullet offset solution was found.”

As the first such assessment of UK offsetting opportunities, it could also inform the government’s approach to net zero more broadly.

The investigation was commissioned in order to assess which offsetting options were the best in terms of readiness to implement, scale of impact, cost, risks and other such factors, lending each aspect a ‘traffic light’ high, mid and low value. On this basis, two are “most advanced”, though they are not without fundamental problems.

For the time being at least, the creation of woodland and the restoration of upland peat have the advantage of the only options that are covered by certification standards.  They are also relatively cheap and have great potential, considering the amount of land available. Both come with benefits to biodiversity.

On the downside, they act slowly, whereas the EA describes the amount of time that offsets take to deliver greenhouse gas reductions as a “critical factor”. They would also have to be delivered urgently to reach “an impactful scale”, by 2030, the report adds. 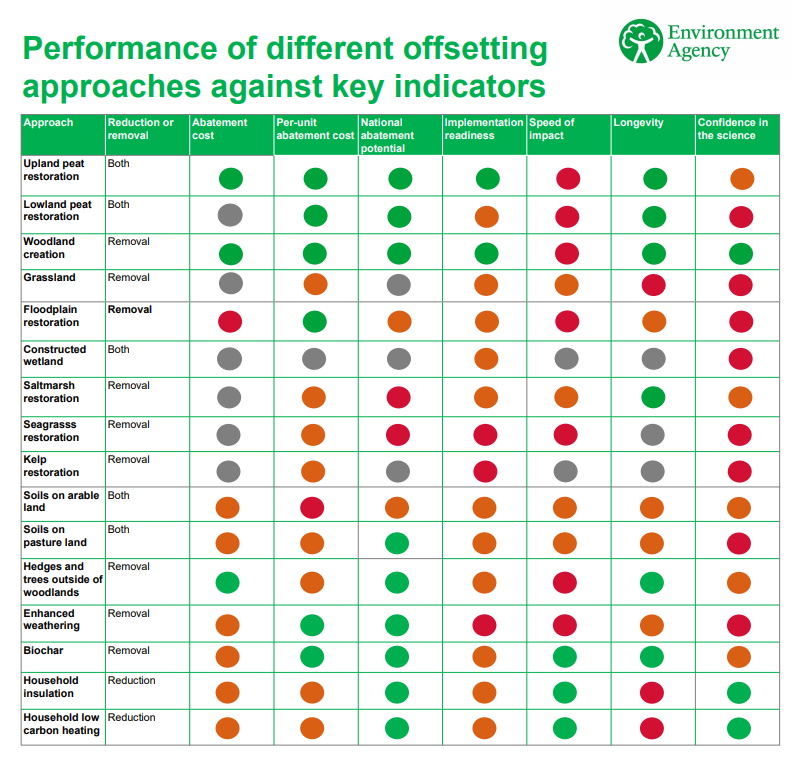 Far speedier solutions are investing in household insulation and heat pumps, which have considerable abatement potential nationwide and a good evidence base. But these too have clear downsides: they are not permanent, unlike landscape-scale offsets, and have a relatively high cost of abatement per unit. They also deliver reductions in carbon emissions, rather than removals.

On the other hand, floodplain restoration has among the lowest costs of reducing CO2 emissions, but can only be done at great scale, meaning equally vast investment. It is also slow, with only moderate potential nationally, and confidence in the science is only moderate. Another factor to consider is sea level rise, which could wipe out any benefits.

But the review does hint that some forms of offset are unlikely to be considered at all. Although they are one of the EA’s functions, the agency found little evidence to suggest that constructing wetlands delivers carbon benefits, and the costs are unclear in any case. The same can be said for kelp restoration, according to the EA.

Enhanced weathering, that is the addition of pulverised silicate rock to soils, has “theoretical promise” as it reacts with CO2 to form carbonate minerals, says the report. However, it is “a long way from being ready to be implemented or scaled” and its removal potential is sketchy, says the report, which suggests that pilot projects could help.

One of the lessons that the EA has drawn from the exercise is that it will need to pursue and integrate a range of approaches to draw on the advantages of each. It will also be important to select offsets that are suitable for local habitats, recognise co-benefits such as biodiversity enhancement and recognise the interests of landowners and other stakeholders, says the report.

It will now feed into the development of the EA’s offsetting strategy, which will also consider the market for international credits and ethical and political matters. The strategy will also be based on an assessment of how land use on the organisation’s own estate could change.

“Drawing the outcomes of these exercises together, the Environment Agency aims to develop a robust and innovative solution to the carbon offsetting component of its 2030 net zero target,” says the report.