The countries that have signed up include India, Guyana, South Korea, and - landlocked - Austria, following a meeting of the G7 Climate and Environment ministers.

Today, which also marks World Ocean Day, the government said it has launched plans for a pilot scheme which would bring HPMAs to life at selected UK sites.

The commitment comes in response to an independent review carried out last year by former fisheries minister Richard Benyon, which called for HPMAs to be set up, prohibiting all damaging activities including fishing, trawling and construction, in order to allow ocean ecosystems to recover.

Responding to the announcement, Tanya Steele, chief executive at the World Wildlife Fund said: “The government’s commitment to properly safeguard UK seas through HPMAs is a much-needed step forward, but it’s critical that this level of protection is given to at least 10% of UK waters, and that urgent action is taken to fully recover the whole of the ocean.

The government says it will develop criteria for identifying the sites and create a list of potential ones this year. Designation would then be made in 2022.

According to a release from DEFRA, the sites to be piloted could be in or outside of existing marine protected areas - where they would benefit from a higher level of protection.

The sites will be identified by Natural England and the Joint Nature Conservation Committee with input from stakeholders with a formal consultation set to launch next year.

The release added that the government “recognises that the strict protections implied by HPMAs will cause some concerns with other sea users and intends to liaise closely with them throughout the process, including the fishing industry."

The Wildlife and Countryside Link’s marine group has welcomed the news, but co-chair Sean Clement said in a statement that: “We need these trials to ramp up to wider protection as soon as possible in order to reach our ambitious 2030 targets, and help prevent the devastation that over-fishing, pollution and other issues are dealing out to our blue planet.”

DEFRA’s announcement comes on the same day that a cross-party group of parliamentarians has pledged to be ‘Blue Carbon Champions’, supporting the Marine Conservation Society’s call for a four nation Blue Carbon Strategy. This would focus on scaling up marine rewilding, integrating blue carbon protection and recovery into climate mitigation and environmental management policies, and working with the private sector to develop and support sustainable and innovative low-carbon commercial fisheries and aquaculture.

Meanwhile, environmental pressure group Greenpeace warned today that the oceans are in a “death spiral” caused by climate change and destructive fishing. 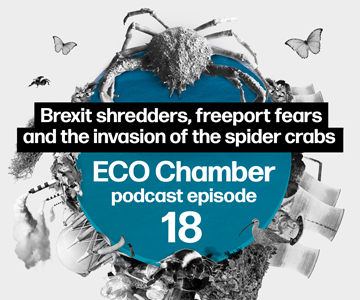